With significantly fewer games to cover in this post, we'll be able to take a more detailed look at one of the prospects who's been surprisingly impressive to me so far this season, and see just why I'll be watching Mattias Janmark  with great interest.

Thursday, October 10th: Athanasiou didn't register a point in this 2-1 loss, but he did have 7 PIM (5 for fighting and 2 for roughing). The Colts were outshot 11-5 in the second period and the Generals scored a power play goal and a short handed goal to win the game.  Video highlights (love the Oshawa goalie's reaction when he stopped the penalty shot) / Box Score / Colts Recap / Fight Video

Thursday, October 10th: Nastasiuk had 4 PIM and was a -2 in a brutal 7-2 loss that included 90 penalty minutes being given out. Video Highlights / Box Score / Attack Recap

Nasty Named Attacker of the Week

Thursday, October 10th: Hudon didn't register a point, had 2 shots on goal and 4 hits in his team's 2-1 win. Box Score

Linköping posted this interview with Bäckman. Unfortunately it's in Swedish, and I don't understand Swedish; so if anyone does and wants to give us a brief summary of the interview, that would be fantastic.

Article of interest: Third Round A Charm For Janmark (Red Wings Central)

I'm very interested in Mattias Janmark. After being completely passed over in the 2012 draft, The Wings took him in the 3rd round of the 2013 draft. At 20 years old, he's a little older than most of the players taken in the draft, but he very well may turn out to be a steal for the Wings. His 12 points in 11 games sound pretty good at first glance, but what makes it even more impressive is how he's doing compared to other players in the Swedish League. You can have some fun with the SHL stats database by clicking here for easily sort-able statistics for each team, position and league.

Since there's often a lot of difference between the different leagues around the world, I looked for some context to Janmark's impressive stats. How does he stack up against his peers? Here's a quick look at where he ranks on his team. Janmark currently leads his team in goals, points, game winning goals, power play goals and shots on goal. One of the things that keeps sticking out to me as I go through the game stat sheets, is how much time on ice per game Janmark plays. He's quite often leading his team in TOI per game, and when he's not, it's only the top defensive pairing who are playing more, and even then it's not a lot more. You can see in the image below (or from the SHL stats link) that Janmark is third on his team in ice time per game, behind only the top D pairing; and he's only 5 seconds/game away from being second on the team. Janmark is playing on the top line, so he's going up against the other teams top players, he's scoring goals, shooting the puck, and playing very heavy minutes every night. (Click on the picture for a full sized version) 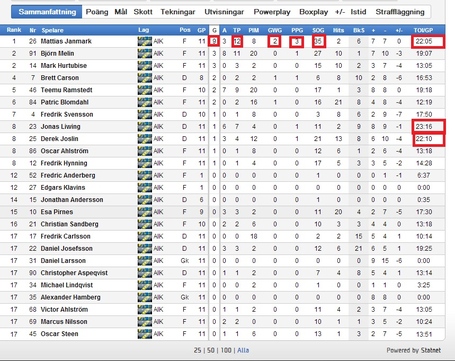 That looks pretty impressive, so how does he stack up compared to all the players in the Swedish Hockey League, not just his teammates? It's only 11 games into the season, and there are 12 teams in the league, and 226 players who have played 9 or more games so far. Janmark currently leads the league in goals, is 6th in total points, 7th in shots on goal, toed for 4th in power play goals, and tied for 6th in game winning goals. (Click the picture for a full sized version) 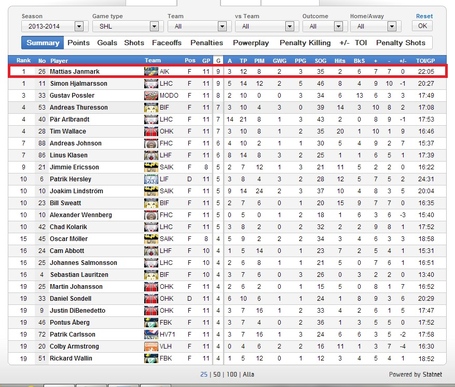 It expected that defensemen play heavy ice time, so it's not surprising that when we sort the league by time on ice per game, that the defensemen make up the majority of the top 25 players, yet there's Janmark in 13th in the league for ice time per game. (Click the picture for a full sized version) 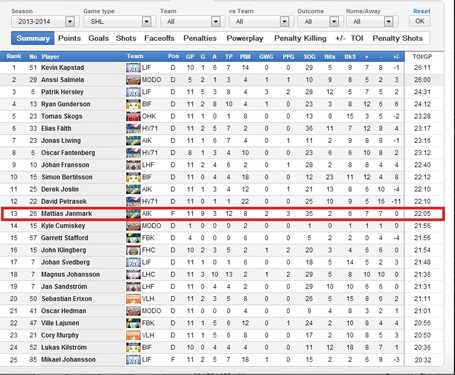 Janmark is getting heavy playing time against the toughest competition, and he's having great success. I was further impressed with him as a player, because he's playing in all situations. Let's see how he ranks in special teams among his teammates. In addition to his heavy power play time (He's 1 second short of leading the team in PP TOI/game), he's also playing the 3rd most short handed toi/game among forwards (7th overall). He's also 13th on his team in shorthanded time on ice/game per goals against. For every 7:01 of shorthanded time Janmark was on the ice for his team, the opposition scored a PP goal. (Click on images for full sized versions) 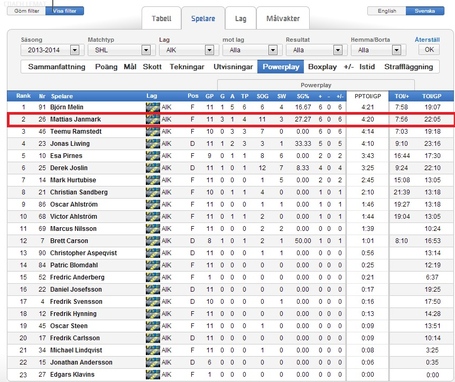 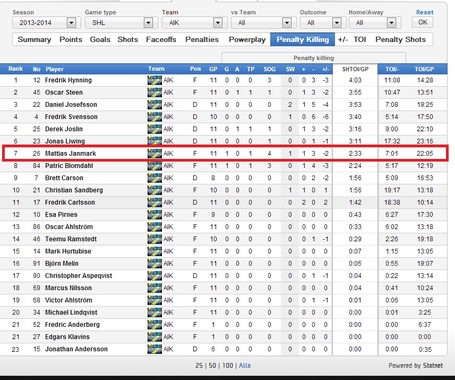 This in Janmark's second year full year in the SHL, and he's on pace to double his points from last year. Last year he had 14 goals and 31 points in 55 games played. So far this season, he's on pace for 45 goals and 60 points. Keep an eye on Janmark, he hasn't received as much attention as a lot of the other prospects, but I think he'll end up being one of those players who surprises a lot of people when he comes over here.

Brendan savage wrote an article on Janmark back in August that gives some good insight into his attitude and work ethic.

Janmark is a skilled, well rounded player who works hard, who's good with the puck, and is used in every situation. We'll have to wait and see when and how he makes the transition to North America, but it looks like this could be a great pick-up by the Wings.

Keep up with all the Red Wings Prospect news with our Prospect News Stream.