First and foremost, sorry for the late recap, everyone at the blog was working or attending class or something came up. I, however, attended today's dumb 1p ET matinee showdown with the Bruins and, oh man, that was a fun game to attended.

I'd like to point out that in the game preview (which I also wrote), I correctly predicted a 3-2 final score favoring the Wings. I also picked Stephen Weiss to be the player of the game. He scored a goal. So he wins. Hell yes. I'm Jeffstradamus.

Where to begin with this one? Same lineup as the Flyers game except for one glaring change... Jonas Gustavsson replaced Jimmy Howard as the starter right before game time. Apparently, James bruised his hand against Philly and sat this one out. This was absolutely fantastic news to me and all the fellow Wings fans at the game.

Nonetheless, let's get to the bullets...

Also, big shout out to our readers Timothy F and his wife, Angelina. The drove down from New Hampshire for the game today. Good people. They received some love on NESN after the Cleary goal too. Thumbs up. 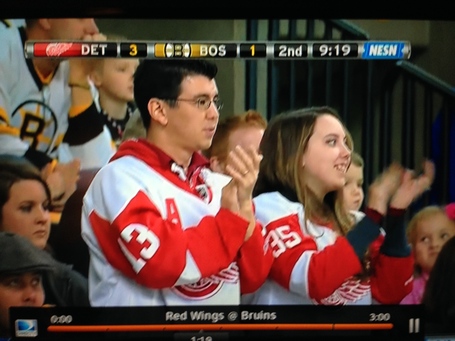