In which we send our college student writer on a mission to participate in a conference based on the business side of sports, held at the Stephen M. Ross School of Business at the University of Michigan.

Share All sharing options for: The Michigan Sports Business Conference - 10/18/13

For the second time in two years, the newly created annual sports business conference, headed by the University of Michigan School of Kinesiology and the Stephen M. Ross School of Business launched students and industry professionals into a looking glass as to how sports work both behind the scenes and in the community.

Sports play a major role in society, and whether it's just water cooler talk or a gigantic waste of time and money is not completely out of the question. However, sports really play a huge role in our everyday lives, inspiring both social change and creating a common collective and emotional bond between millions of people every day.

This year's conference displayed that in full, with full house of members in the Blau Auditorium, taking in speeches from Michigan Athletic Director and former Dominos CEO Dave Brandon talking about the massive redevelopment of the Athletic Campus. Sixteen projects will be completed over what is termed as an "ASAP" timeline of making Michigan Athletics the crown jewel of the Big Ten.

Attendees were then given a very special treat, as the President of ESPN, John Skipper, gave the keynote address in what can best be described as a talk show setting hosted by none other than the voice of Monday Night Football, Mike Tirico. Tirico interviewed Skipper with a wide range of questions, but make no mistake, Skipper is truthfully down to Earth and all around a very nice guy.

Skipper talked a lot about how sports and the business associated with athletics has to offer when it comes to generated revenue and social change in society, a gateway for what the rest of the day would entail.

"I also believe that sports is ascendant in society." -Skipper

Truth be told, that is a very notable quote from a very powerful man, no matter how arbitrary or basic it may seem.

After the address, students were entertained to a catered lunch, courtesy of none other than Palace Entertainment and the Detroit Pistons, and were given time to reflect and socialize with one another.  [I must say my caprese wrap could have used some more of a winning attitude.]

Next on the agenda were the breakout sessions, where guests chose one of the following panels:

In the case of Winging It In Motown and everyone trying to be as funny as JJ on Twitter, number three was the way to go. The panel of social media experts consisted of Jordan Maleh of Michigan Athletics, Jeff Weiner of ESBL Social Media, Chad Wibiseck of MEDC (which runs the Pure Michigan social media sites), and last but certainly not least, Ayron Sequeira of the Detroit Red Wings.

That lady that posts replies to fans at 1:00 AM? It's usually Ms. Sequeira. 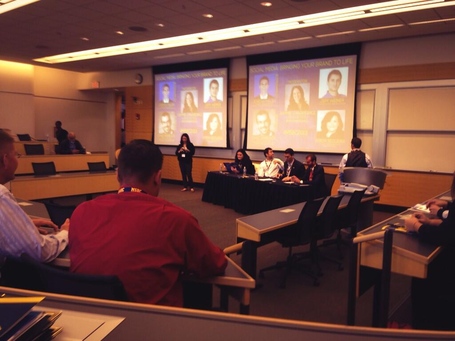 The panel provided a plethora of examples as to how social media is not only growing, but underutilized [professionally] in society. Make no mistake, running a twitter for a business or media outlet is a lot different than a personal twitter. [Side note, don't you wish "anons" and random girls/boys who post "picslips" would just go away?]

All four members were engaging, educational, and downright hysterical. Not to mention the fact that there is such a thing as a "social media expert," contrary to popular belief.

The players of the Red Wings do enjoy social media, and even though Jimmy Howard is at the point in his life where he doesn't see the need for it yet, he enjoys interacting with fans on the "Flagstar Twitterviews" that the Red Wings have. Many players, according to Ms. Sequeira, watched Howard talk to fans via the Red Wings account and wanted to know when they were next.

Jakub Kindl may take some time, as he is a young hot blooded Czech:

Afterward, students and industry professionals were given about forty minutes to partake in a networking session in the Winter Garden at Ross as well as the lobby outside the auditorium before the afternoon panels. Let's just say one member of the blog may or may not be sporting a Johan Franzen jersey in the press box not too far into the future.

Back to the auditorium the conference went, and two more panels were brought out for students.

The first was Brand Expansion Through Sport, where members of the advertising and entertainment community talked about using sports as a medium for growing their brands. Arguably the most engaging member on the panel was Mike Farah of Funny or Die, and he brought with him a special treat featuring Tom Brady.

Morgan Freeman is the "voice of G-d" according to @KauffmanMatt of Visa. Mike Farah asked about Freeman's salary. Answer? "Millions."

Kauffman also did a Dr. Evil pose with his pinky finger on his mouth when he answered the question. #MSBC2013

With some corny jokes and dull moments aside, the panel was well done and showed what message companies generally try to get across during dinner time sporting events. Thank goodness there was nobody on the panel from Viagra.

Finally, the most special part of the day was the conference call with NFL Insider with ESPN, Adam Schefter, who once and for all proved that working in the sports world is a 24/7 job that is not as rosy as everyone makes it out to be. Schefter is largely considered legendary and the most reliable member of the NFL rumor community, where he is always the first to break news and rarely the last to ever be wrong. It should be noted that Mr. Shefter and Ms. Jacobson are both alumni of the University of Michigan, so the facade of talking like old friends seen in the video below was not a facade at all.

All in all, the Michigan Sports Business Conference provided a window into the sports world rarely seen by casual fans, giving an opportunity for industry professionals and aspiring members of the professional sports and media communities to share a day together, exchanging ideas, business cards, and a few laughs.

The third annual conference will take place during the 2014-2015 school year on a date to be determined.