Spirit vs Colts: What I learned

Share All sharing options for: Spirit vs Colts: What I learned

I attend my first OHL game on Friday, when the Saginaw Spirit hosted the Barrie Colts. I was admittedly torn in my allegiance. Who was I supposed to root for, Jake Paterson to get a shutout, or Andreas Athanasiou to score a hat trick? I eventually decided that I'd root that the only goal(s) scored by Barrie would be Athanasiou goals. At it turned out, Athanasiou didn't score Barrie's only goal, and Paterson was fantastic. This was the Spirit's "Pink the Rink" game to support breast cancer awareness, so there's pink everything and the special pink jerseys were auctioned off after the game.

The Spirit brought out this giant inflatable eagle arch for the players to enter the ice through. It actually consumed at least 2 arena workers while it was being inflated. The flacid eagle beak was an awkward sight to behold. 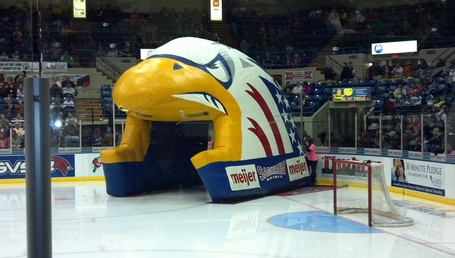 The only goal that got past Paterson was a power play goal half way through the second period when Tyson Fawcett (who's 5'6" 170 pounds but looks like he's 3 feet tall on the ice) shot the puck from the point through traffic, and the puck hit the crossbar and bounced in. OHL games are often high scoring affairs, but when the Spirit and Colts were tied at 0 after the 1st, and tied at 1 after the 2nd, I was beginning to wonder if we would see any more goals at all. The Spirit came through though and scored 3 more goals in the 3rd period to secure the win.

Even though I went into the game expecting a much lower level of hockey than I see even in Grand Rapids, I was still surprised by just how much lower it really was. It was kind of like watching high school or AA hockey, and it was easy to remember that these guys are still just kids. It was also a good reminder why forming expectations of players based on their play in the OHL is so risky. These are high school aged kids, and they looked like it.

I was sitting just to his left for 2 periods, so I got to watch him up close. I was again struck by just how calm and patient Paterson is. There's no panic and no scrambling in his game at all, and the Colts forwards were unable to fake him out, or get him to over commit, because he calmly waits for the puck to come to him and then stops it. Some goalies move around a lot in the crease as they're adjusting position and getting ready for the shot, but Paterson just seems almost stone cold in his reactions, but he's makes the saves (and some impressive ones at that). He doesn't drop too soon and need to recover, and his almost robotic demeanor in the crease gives opposing forwards almost no indication of what he's going to do. His calm demeanor was even more apparent in contrast to the Colts goalie who seemed to scramble a lot and just couldn't seem to hold on to the puck; giving up rebounds and lose pucks like they were candy at Halloween.

The Colts were trying to get traffic in front of Paterson all night, but Jake didn't seem to mind at all. He has an uncanny ability to see right through people; at least that what it looks like. He is somehow able to see or anticipate the pucks even through heavy traffic. It's very impressive.

The Spirit defense is improving, and I noticed them blocking numerous shots (a couple that clearly stung). Paterson is getting more support, and facing fewer shots (he only saw 26 in this game) which takes a little of the pressure off of him. Jake Paterson is the big draw for the Spirit, and he's done a bulk of the heavy lifting for the team, both so far this season and last season, it will be interesting to see what he can do when he has more support from his team.

Andreas Athanasiou was a little disappointing...

During the 1st period, a good chunk of the time the Colts were in the offensive zone, Athanasiou was on the ice, so it surprised me how little ice time he got. The OHL doesn't keep track of ice time stats so I don't have exact numbers, but it was less than I had expected. He played on both the power play and penalty kill, and he was on the ice moving in front of Paterson when the Colts scored their power play goal.

He's good with puck and had several good scoring opportunities that either just missed the net, or Paterson got in front of. What bothered me was how he played when he didn't have the puck. Without the puck he mostly stayed to the outside and either called for the puck, or waited for his teammates to try to get it to him. He was much more aggressive during the Prospects Tournament so I know he's capable of going in and fighting to get the puck himself. I don't know why he played the way he did, but it was disappointing to see.

The Spirit scored early 3rd period goals only 6 seconds apart, and after that Athanasiou's ice time seemed to decrease noticeably. He also tried to get way too fancy and was not very effective. Mid way through the 3rd period when the Spirit had a 4-1 lead, Athanasiou looked like he didn't really care and just wanted the game to be over.

Athanasiou did save a goal in the 2nd period when his goalie left a juicy rebound in front of the open net. It's only one game, but there was more from Athanasioiu that I didn't like, than there was that I was impressed with.

I don't know if it's common practice in juniors for the goalie to skate towards the bench after a goal and high five his teammates, but both goalies did it in this game and it was pretty darn cool to see.

There was also this very intense, very lengthy, spinning on the ice hug after the win, between Paterson and Justin Kea. Lola by the Bay was sitting next to me, and she said the hug was so amazing there may have been tongue involved. 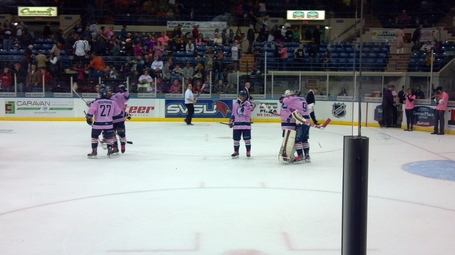 I'll be attending the Spirit game Friday night when Captain Zach Nastasiuk and the Owen Sound Attack come to town. If you have the opportunity to attend any of the OHL games, I definitely recommend it. The seats are cheap ($17.50 for glass seats), it's entertaining, and it's very enlightening and educational.