Before we get to the game day news, David asked me to make an announcement.

As some of you may already be aware, there exists a Winging it in Motown twitter account that's specifically dedicated to live tweeting games. It's something new that we're trying, and David will be at the helm tonight. If you aren't able to follow in the game thread here on the blog, or maybe just want a little extra somethin' somethin' , you can follow along on Twitter with the WiiM Game Thread account @WIIMGame

Here's your preview of the festivities from David himself...

To have all of your questions answered, tune in as @dmmm14 live tweets. As always, stupidity is on @wingingitmotown and @nucksmisconduct.

Please go give him shi.... I mean some company, and make sure to ask him some really strange questions.

Now, back to your regularly scheduled updates.

The Red Wings have been their own worse enemy. Babcock has said it, the team has said it, and the fans have seen it. In light of this difficult time, the Wings website decided to troll us with this lovely Det vs. Det post. Well played guys, well played. 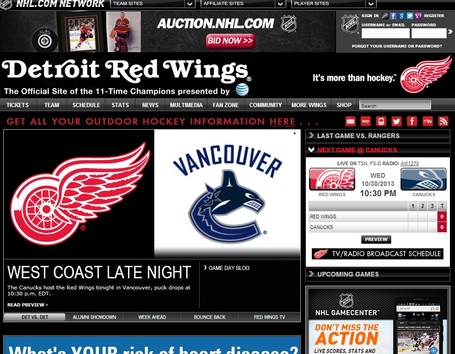 The lines from the morning skate look like they'll remain intact. The only lineup change from the Rangers game will be Patrick Eaves in for Jordin Tootoo.

Helm is with the team on this 4 game Canada trip, and we're still being teased with the prospect of his return. Kenny Holland said today that the plan is for Helm to play in Edmonton on Saturday. Believe it or don't, that's up to you, but I'll hold off on my happy dance until I see him on the ice in an actual game.

The Wings plan to put Jonathan Ericsson on LTIR to make room for Helm's return. According to Ansar Khan, Riggy won't even start practicing until next week. He'll have to miss a minimum of 24 days or 10 games before he can come off LTIR. Long Term Injured Reserve can be retroactive to the first game he missed with the injury, which was October 21st against San Jose. If the team uses the retroactive option, that means the first game he'd be able to return for would be on November 15th against the Capitals. He was originally projected to miss 2-3 weeks after dislocating his left shoulder in Phoenix, so this move makes sense.

Johan Franzen won't play tonight, but has been cleared to play Calgary on Friday, and will join the team at that time.

Not including games played last night, Justin Abdelkader is 3rd in NHL hits with 48 (Tanner Glass is first with 50) and Pavel Datsyuk once again (still?) leads the league in takeaways with 22 (some guy named Hossa is second with 20).

The Canucks has an optional skate this afternoon that included 8 skaters and 2 goalies. I reached into my magic lineup ball, and drew the following projected lines: