Tonight's win was a very interesting yet welcomed victory for the Wings. The opening paragraph of a famous novel should do the recap some justice:

This is just to prove that we all have well rounded backgrounds and can still make time to watch our team on TWO TWITTER ACCOUNTS, not zero Nucks Misconduct.

We all know Western Canadian road trips are full of suck, so in order to sum things up quickly (so I can go to bed), let's go over tonight's game in bullet point fashion:

Be proud of the boys tonight, everyone. They earned a round of applause. They'll play Calgary next on Friday, November 1 at 9:00 PM EST.

Now, the moment you've all been waiting for, here are our featured winners from tonight's horribly promoted "Be Funny and Get Yourself in the Recap" contest:

Nobody was really incredibly funny, except for us. Come back stronger next time! 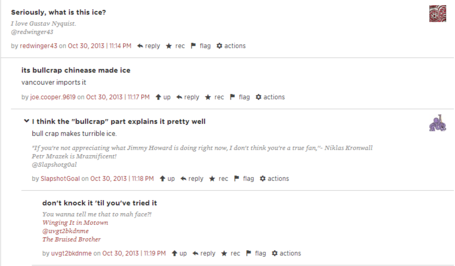 Michelle was quite funny the whole night, but we can't reward our own Masthead. We can, however, tune our own horns. However, Redwinger43 and Joe Cooper win tonight's contest. Also, honorable mention to the chicagowingsfreak! and his "GET HUNGRY" comment.

Last but not least, tonight's "WTF?" moment presented by Michelle, when the box score went crazy on nhl.com: