There's multiple storylines to every game, but the only one you need to know is that you should be very worried about everything

I guess the moral victory tonight was that the Red Wings played better than they have since Western Canada, did all the things they wanted to do, and got the game all the way to a shootout.

The flip side is that they still lost, their sixth straight game at Joe Louis Arena without earning 2 points, and the early season struggles continue. Despite outshooting the Jets 43-21 and generally controlling play, the Wings needed a late power play goal by Pavel Datsyuk just to get the game to overtime. Detroit was able to survive the 5 minute OT without giving up a goal, but Jimmy Howard thought it was 2010 again and failed to make a save in the shootout, putting the rotten cherry on top of the melted sundae that was tonight's game.

It's been a while since I've done one of these, so you'll have to bear with me as I get back in the swing of things. What's next? Oh right......BULLETS!!! 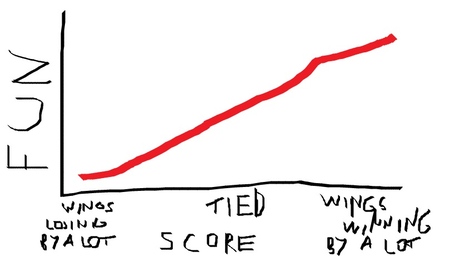 i mean, my goodness, detroit red wings are at risk of a 6th straight home loss, and a skills competition is going to decide it? NOT SPORT!