Share All sharing options for: ME GUSTA(V): Red Wings 4, Hurricanes 3

Ken Holland, I swear to God, if you send down Gustav Nyquist…

About two hours before the game I sent JJ this gem of a meme. I honestly didn't think it would happen. Love Nyquist. Deserved to be on the team all of last season. Should have been on this team all season. Didn't in my sane mind think he would score two goals and steal the show tonight.

For the first time in six full years the Red Wings won a game at home. They finally snapped their seven game losing streak. And, they did it on the backs of a kid.

A way "overripe" kid who just owned a team in a men's league.

Just imagine how many goals he would have if he played every game this season? Just imagine where this team would possibly be in the standings? Now, I'm obviously on a Nyquist-high right now, and Goose probably wouldn't be leading the NHL in goals or points or anything like that, but he's a legit as f*ck top six forward and it's clear he provides that secondary scoring this team has been b*itching about for the entire season.

So Ken Holland… I hope you were paying attention.

With their first win in the last 8 games, the Wings are now only 3 points out of first in the conference #LeasternConference

Gustav Nyquist is your player of the game.
And, buy this shirt! 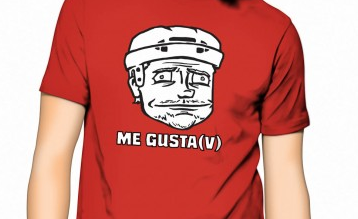 More from Winging It In Motown: