Yesterday morning the National Hockey League officially took over Michigan Stadium. For the next few weeks, the league's ice crew, led by Dan Craig, the NHL Senior Director of Facilities Operations, will build a regulation NHL-standard sheet of ice atop the block-M on the football field.

The 53-foot trailer, the world's largest mobile refrigeration unit, departed Toronto on December 10 to make the 273 mile journey to Ann Arbor. Yesterday symbolized the completion of that journey and the start of the NHL's series of outdoor games.

It takes more than just putting down a liner and flooding the rink with water.

"We have a 300 ton refrigeration capacity," said Craig. "If we have a sixty degree day, don't anybody worry about it because we're still playing hockey."

(In case you're wondering, I'm the guy in the white hat. But you only cared about ice, didn't you?)

Every venue is a little bit different and presents its own challenges, but overall the general idea to the ice crew is the same. "It makes no difference to us, it's a matter of where the piping runs to, the length of the piping, and we have to make sure that we have to have the proper flow rate from the truck to the floor and back," said Craig.

"We have guys that are making millions and millions of dollars, their careers are on the line, and I know that every single day."

Many have been concerned over the fact that there are too many outdoor games this year, but red flags went up when the NHL announced an outdoor game in Los Angeles. However, Craig showed no signs of giving in to mother nature. "We're going to be making ice in LA. It's not 'if,' we are." The truck goes straight to Los Angeles right after the Winter Classic is over.

The only thing that may have gone awry with the ice construction over the last few seasons? Parking tickets, specifically in New York City. "We try to avoid those, but when you want to do a feature such as [the Winter Classic] and it's the only place to park a fifty-three foot trailer, that's where you have to park it."

The University of Michigan police have not yet written up the truck for any sort of parking or traffic violations.

Outdoor games always bring back a large amount of nostalgia. After all, this is why the Winter Classic is the largest and most successful annual national event that the NHL runs. It is essentially the Super Bowl of the NHL. It is the only day where hockey truthfully owns the spotlight. Why? Human beings always look back on the "good old days," where gas was $0.25 a gallon and Joseph McCarthy was saying that communists live under everybody's bed.

Many NHL players got their starts playing outdoor hockey, and Tomas Holmstrom was no different.

"It's cold, you're outside, you're coming home from school, you're skating out on the pond, or somebody's backyard, for sure it brings out memories," he said. "This is going to be the first game since I retired too, so I try to have to stop eating, get back in shape, and work on my game."

Holmstrom talked about the growth of the game as a whole thanks to outdoor games, citing that kids would probably see the game on TV and be inspired to go outside and play hockey rather than staying in and playing video games. He would have never dreamed of playing in a game this large when he was a kid. "Not on this level," he said. 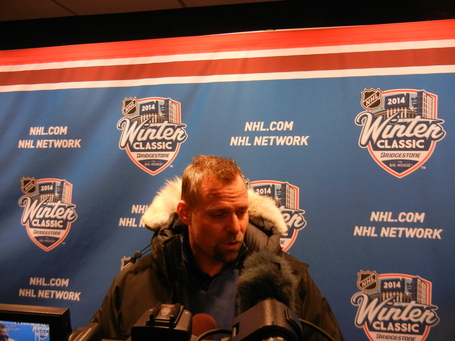 Tomas Holmstrom talks to the media at Michigan Stadium on December 12, 2013. (Photo by David Malinowski)

Make no mistake, Tomas Holmstrom is still going to be screening the goalie and scoring his signature goals."Yeah," Holmstrom laughed, "I'm not going anywhere, I guess. I get myself in front of the paint and stay there, and hopefully I can stay outside the paint."

When asked about any notable opposing players, "Sundin, he's probably going to skate around out there, and then McCabe, he [was] always cross checking me all the time so he'll probably keep doing that, I guess."

The ice surface is nothing short of an intense operation, more than just flooding ice with water. Don Renzulli, the NHL's Executive Vice President of Events, told the media that Dan Craig has the ability to monitor the ice surface twenty four hours a day. At any given moment, for instance, he can pull up the temperature on his phone through a simple app. In terms of Michigan Stadium specific concerns, the NHL expects the event to go off as more than just an outdoor hockey game.

Here's Don Renzulli, NHL Executive VP of Events, talking about the construction of the rink and execution of the WC. pic.twitter.com/jqJOaC6jM7

The NHL will be setting up tents with food and live entertainment right outside of the Jack Roth Stadium Club over at Gate 1, to aid to the pregame experience that would normally be filled up by tailgaters. Renzulli doesn't expect too many families to pack a full grill and cooler with them the morning after one of the biggest holidays of the year.

There is no worry on the issue of the in-game fan experience either, as Renzulli re-assured the media, "We've been here for football games, they've told us about what's been happening for hockey, so think we have a pretty good handle on it."

Building an outdoor rink to near perfection each year creates a new learning experience for all that are involved. As for the number one thing that Dan Craig has improved on over the last few seasons? "Patience."

This is part of a series of posts leading up to the 2014 Bridgestone NHL Winter Classic. Feel free to check out our Winter Classic design contest where you can win tickets to the NHL's premier outdoor game, as well as the H2H3 pledge drive for the Children's Hospital of Michigan Foundation. You can also text KIDS to 85944 to donate $5 to make an easy donation (full details here).