A defense for Jimmy that is 100% Quincey-free.

I need to open this by stating I know that most Red Wings fans appreciate what we have in Jimmy Howard. Before Howard’s arrival and his subsequent reign as starting goaltender in Detroit, we watched more than a few league-average performances between the pipes. Even for those of us who were big Chris Osgood fans (I being one of them), it would be hard to argue that the state of things in net for the Wings is worse now than it was before Jimmy took the job.

But there’s a vocal minority out there, a group just loud enough to annoy me. Maybe "annoy" isn’t the right word. After all, I have every right not to search "Jimmy Howard sucks" after a Wings loss on twitter and spend 30 minutes scrolling through the vitriol. I don’t have to turn on basic sports talk radio and listen to callers phone in to 97.1 and bitch about how Jimmy hasn’t won anything yet, but I do, occasionally. I don’t know what to call it though. Disappointment? In a way, sure. Disappointed in myself for punishing my own brain, for one thing. But also, in this age where we have easy access to the general behavior of the 29 other fanbases, it’s oddly disappointing to see that we have some of the same breed of stupid that those other fans exhibit. Weird, right? So I’m here to fix that and then we’ll be in 100% agreement on the topic and we’ll be the smartest fans out there. How thoughtful of me.

Now that I’ve botched a justification of why I’m devoting 2,000 words to a thing most of us agree on anyway, let’s go inside the numbers and address some of the more common myths among Howard haters. 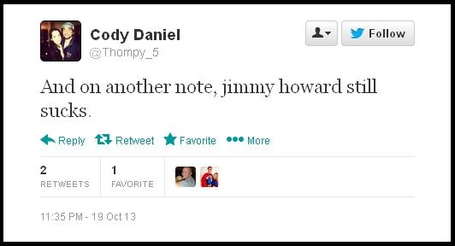 Over the course of the four full seasons we have watched Jimmy Howard play, he has proven to be a better than average NHL goaltender. If you’re not big into advanced stats, this is as basic as it can be broken down: in a game where the goal is to prevent pucks from being shot into the net, Howard prevents pucks from being shot into the net at a better-than-average (and then some, arguably) clip. Only six goalies have seen more shots than Howard since the 2009-10 season per Hockey-Reference.com, and of those, only Pekka Rinne, Henrik Lundqvist and Ryan Miller have posted better save percentages. Odds are you didn’t need to see a graphical representation to know that Howard has been good, but there you go. 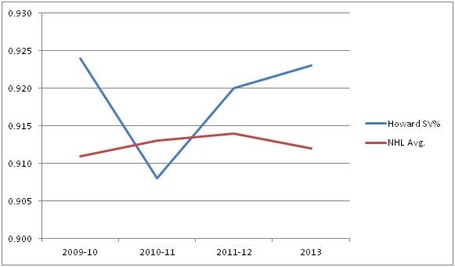 If you lower the sample size to just 4000 shots against as opposed to the nearly 7000 Howard has faced (a club that includes 32 goalies), you're still left with a group of only six goalies that have posted a better SV% in that same time frame: Tuukka Rask, Tim Thomas, Tomas Vokoun, and the three mentioned in the previous paragraph. I'll go to bat for any goalie who's first in line behind that group in saying that he's very good, much less that he doesn't suck. In a position where hot and cold streaks plague its participants like no other in professional sports, the fact that Howard has been able to be as relatively consistent as he has been is very impressive.

Howard is in the first year of a six-year deal that carries a cap hit of about $5.3 million. This is a steep raise from his previous seasons wherein he was getting paid like a slightly better version of Jonas Gustavsson, and yet it's still only the 12th highest cap hit for a goaltender in a 30 team league. Not too bad. It's a far cry from Roberto Luongo's albatross contract ($5.33 until 2022); a little lower than flash-in-the-pan dive artist Mike Smith ($5.7 for six more years); lower than Jonathan Quick's $5.8 x 10 year deal -- a guy who has had more below average seasons (2010, 2013, very possibly 2014) than stellar ones (2012); and only a little higher than Martin Brodeur's $4.5, which would look a lot better if Marty were still alive.

Antti Niemi has put up similar career numbers to this point and carries a hit of about $1.5 million less, but then again, at the time Niemi's latest contract was signed, Howard counted only $2.25 million against Detroit's cap. Timing is important when making contract judgements. It's tempting to just look up what every goalie in the league in making now compared to what we feel they are worth, but the reality is that the market fluctuates from year to year, especially so in a league where financial stability is always a topic of discussion. So given that, if you take a look at 2013 goalie signings/extensions alone, Howard's deal resulted in only the sixth highest cap hit for a goalie behind Kari Lehtonen, Jonathan Quick, Sergei Bobrovsky, Mike Smith, and Tuukka Rask. I don't necessarily think this, but you might actually be able to make an argument that Howard is slightly underpaid.

It would be hard to convince somebody that Jimmy is reasonably paid when they think that he's bad in the first place, but as we've been over already, his body of work relative to other goalies in the league during Jimmy's career to date has been more than adequate. To think that he's overpaid means you ignore the business side of the NHL completely, judge puck-stoppers from a standard that doesn't involve statistics about stopping pucks, or a combination of both. 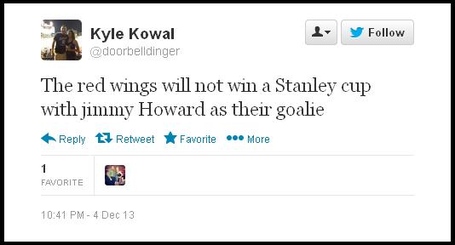 We'll get into the playoff numbers in a second, but first, remember the final four games of last season? Howard stopped 94 of 97 shots, put up two shutouts, went 4-0-0 and dragged the Wings into the playoffs by one point. Perhaps the biggest constant in Detroit over the past two decades has been the playoff streak. Every season we say hi to new faces and bye to the old ones, ride the emotional waves of injury-plagued regular seasons, losing streaks, winning streaks, loser point streaks, but in the end, we can rely on the playoffs. Every year. Well, He-Sucks-When-It-Matters Guy, Jimmy Howard played a big part in saving that for you in the spring of 2013. I don't even want to know what it's like around here when the Wings miss the playoffs, and quite frankly, I hope I'm far away from here or even dead when it happens. It won't be good. Luckily, I don't know what this is like yet because he was awesome last season.

As for the postseason, we are well aware that he has not been part of a team that has made it past the second round. There are always going to be people out there who only think a goalie is really good if he wins a Cup, because it's the easiest way to think about stuff and frankly, a guy lifting a big shiny trophy at the end of the season looks really cool. But to use this as the sole means of judging Howard's playoff performances would be taking a major shortcut. 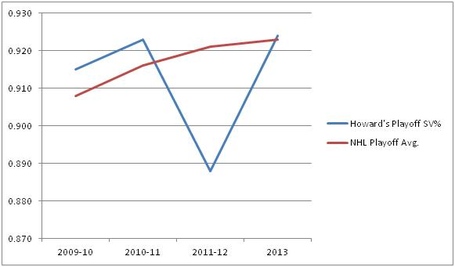 I'm not crazy about looking at save percentages when it comes to the playoffs, because the sample size is even smaller than that of the rut he's currently in. Still, it doesn't mean we stop talking about how individuals play once the regular season ends, and it just so happens that Jimmy isn't too shabby when the games truly matter. There isn't a drop-off from his regular season to postseason play (.917 to .918 SV%, respectively), so to in any way insinuate that he's a choke artist given this information would be disingenuous. To win a Cup with this roster, it's likely that he'll have to go on an astounding tear to do it, but I don't see how we can fault him if he doesn't. You have to look at the team as a whole when spreading blame around, and that takes a little more brainpower than "the goalie was good" or "the goalie was bad."

Going back to 2009, the last five starting goalies on Stanley Cup winners had save percentages of .932, .946, .940, .910, .908. The most recent three (Corey Crawford, Jonathan Quick, and Tim Thomas) had terrific playoff runs, while the two before them (Antti Niemi and Marc-Andre Fleury) posted a SV% below league average. All five guys played for really good teams. What does this tell us? That blanket, absolute statements like "The Wings can't win a Cup with Howard" are at worst shortsighted, and at best an accidental assessment of the Wings as a whole, who will probably need a superhuman effort from their goalie to win it all this season. And if he doesn't produce that, well, he's only the 12th highest paid goalie in the league in terms of cap hit so go out and get Tuukka Rask, or something. 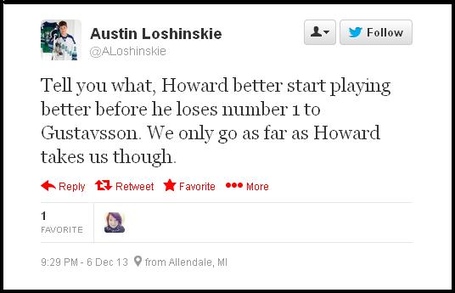 For god's sake. If you would have told me after Jonas Gustavsson was signed that, at any point in his tenure here, he would be able to force even one single person to form the words "goalie controversy" and propel them from their stupid lips, I would have quit right then. Nothing makes sense, nothing is right in the world and I don't understand how anything works at all.

As it happened, Gustavsson turned in his best run of play to date and somehow managed to do that at the same time Howard found himself in a bit of a funk. He also managed to hypnotize his teammates into providing him an average of 3.2 goals/game in support, while providing only 2.2 goals/game for Howard. The mustache is involved in some way, I'm convinced of it. And because this is the way fans are, we are now experiencing the absurdity of a Gustavsson-Howard goalie controversy, even if it's only a fraction of our fanbase.

Look, nobody is arguing that Howard has been good so far. I don't want you to think that this is what I've been doing or what I'm thinking. He has been less than sharp and Gus has been way more competent than I thought he could even pretend to look. But let's take a step back and remember that Gus put together three awful years in Toronto and another bad one in spot duty for Detroit last season. Before 2013-14, he gave us 114 games worth of evidence to show that he isn't very good at being an NHL goalie, whereas Jimmy gave us 234 games worth of evidence to show the opposite. To say that there's a chance -- even the slightest damn chance -- that Gustavsson gives your team a better shot the rest of the way is to say that you believe Jimmy and Gus had a Freaky Friday-like collision. There is no other explanation. Goaltending at the NHL level can be an incredibly flukey thing, so to even give this topic more than a second's thought when we can be pretty confident about a sure thing in Jimmy Howard is bewildering to me. 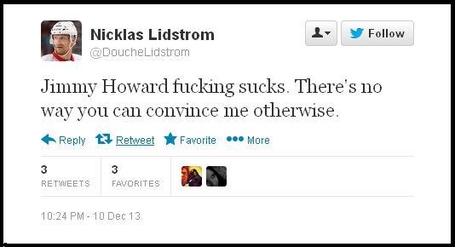