Much was made around the internet about how episode 1 was the most boring episode ever of this series ever, and while it wasn't exactly riveting, I thought it was pretty good.

However, I did agree with some of the criticisms surrounding the first episode, mainly that there was too much narration and setting up with less focus of the personalities and candid stuff, and that the people they did show were kind of bland.

With that being said, it led me to lower my expectations heading into episode 2, which I just finished watching. Overall, I found it to be much better than the first, for reasons that are my own and none of your business. Here's what really stood out for me:

Justin Abdelkader and Brendan Smith were front and center for the Red Wings early on, and we saw that Smith wears a toque while putting on a tie, which should come as no surprise to anyone. Then when they came out of their apartments in slow motion they touched hands and all I could think of was "Wonder Twins activate! Form of: legitimate NHL hockey players!" As they were driving to the arena, there was some canned, scripted crap but then some dude spun out and that led to Abby saying to Smith "looks like you out on the ice" to which every Red Wing fan laughed and mentally high-fived Abby for saying what we're all thinking.

I want to make fun of the Maple Leafs blasting Miley Cyrus in their dressing room after a win, but given their past history, this isn't the worst thing they've ever done. 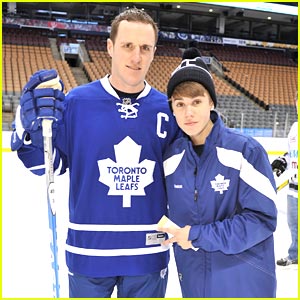 "We find a way not to win" - Mike Babcock to Ken Holland, when asked to describe the 2013-14 Red Wings in one sentence.

The Leafs fly Delta? We just found another piece to the "reasons why the Leafs haven't won a Cup in 45 years" puzzle.

When Todd Bertuzzi smiles, a demon gets his horns.

A lot is being made of Babcock and Carlyle kicking the HBO cameras out of the dressing rooms on the same night (although the audio from Toronto was caught). I understand the anger and frustration because part of putting on a Winter Classic game is having HBO get total access to each of the teams. From a Wings fan perspective, I'm less concerned about Babcock pissing off HBO than I am about him getting his team in to a position to win a hockey game. I get that there's likely something in the contract between the NHL and HBO that requires the teams to never prevent HBO from getting footage, but this tweet from Nick Cotsonika show that the NHL and both teams review the show before it airs, so they were aware of this before we were. If this does become an issue going forward, then either HBO will stop doing this or teams won't be allowed to limit access. Personally, I would have LOVED to have heard what Babcock said to the Wings during that intermission, but alas I, like the rest of the world, have been denied.

Say what you will about the narration and the players being "interviewed"; the portions of the show where they show the actual on-ice hockey are erection-inducing of both the male and female variety. I did love that they showed more of the on-ice conversations that take place, especially the one between Sidney Crosby and Dion Phaneuf where Crosby called Nazem Kadri a "fucking joke" and then admitted he doesn't hit anyone. I'm no Crosby fan, but that was fantastic.

Serious request for next episode: more Brendan Smith. He seems to be the only Red Wing beyond Babcock who seems comfortable in front of the camera, and he seems like the kind of guy who wouldn't allow anything to get in the way of displaying his personality. In fact, more of any player, because, while I like Babcock, I'm kind of sick of him at this point and would love to see other people within the Wings shine. However, with the Wings having won 2 games in a row now, I'm expecting things to pick up a bit in episode 3.