We tell you whether or not you "wasted" your money on an outdoor hockey game that you may or may not even be able to see.

Share All sharing options for: 2014 Bridgestone Winter Classic® Update: Will My Seats Suck?

Getting the tickets for the Classic was hard enough. Choosing where to sit was probably even harder. Speculation is key, but there's a little bit of wiggle room in terms of how well you'll be able to see the action on the ice once inside the Big House.

For starters, the NHL will be placing seat cushions on every square inch of the Michigan Stadium bleacher seats. Your fanny will not be sitting on blue steel at all, unless you want it to.

The #WinterClassic cushions are getting placed on seats today. Excited to take yours home with you after the game? pic.twitter.com/wSsv9cGjoX

The cushions will make the stadium bowl look like it doesn't belong to the University of Michigan, which is the NHL's goal from most of the advertising and logos they're putting up on the stadium facade as well as around Ann Arbor.

This isn't thermodynamic nuclear warfare, nor is it rocket science; it's basic. The stadium will be split up between the Red Wings fan section and the Maple Leafs fan section on January 1, as shown below: 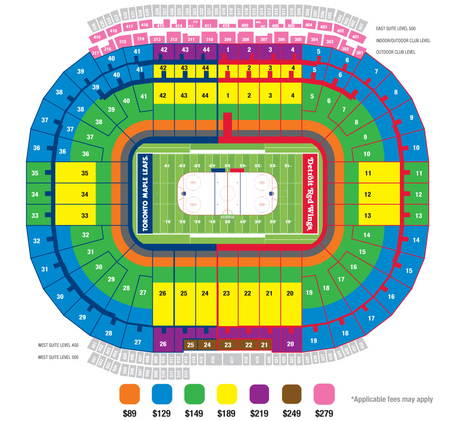 At Michigan Stadium, where Dave Brandon has yet to scheme the monetizing of the naming rights, there is one seating bowl followed by two stadium/suite clubs on the eastern (top in diagram) and western (bottom) side of the stadium. Prices are of course hiked for the event, but the overall stadium seating pricing trend continues: the more expensive seats tend to be the better ones. This does not imply, however, that the closest seat to the playing surface is more expensive as well as higher in quality.

In fact, it's generally better if you are sitting a little higher up from the action. You want to be in the dead center of the bowl, closer to center ice. It is ill-advised to be too far away to the point of where you cannot see anything. However, don't go to the other extreme and set yourself too close to the boards to the point where you don't see the lower half of players' bodies. If your ticket says $89, you might not be the happiest camper in the world.

Allow me to take you on a brief tour of the seats at the Big House*:

">50-yard-line seats at Michigan Stadium for the Winter Classic ... pic.twitter.com/b4UNdgt7kV

This picture was snapped right at the perfect location, above the huge block-M in the stands (on the eastern side of the stadium). Notice how there are zero obstructions and you're close enough to the rink where you can see everything that you want to.

This is the view you should expect if you bought a suite or club tickets. You'll be well above the ice surface, but you'll still get to see everything. Sure, it'll be more of a bird's eye view, but in all likelihood you'll get the best of both worlds: the ability to go inside and grab some food in the warmth while possessing the ability to sit outside with a blanket (it's projected to be well below freezing on New Year's Day).

Here's a view that isn't the prettiest but still very good. The view from the southwest corner of the bowl, again about midway up and possibly a few steps. While not as good as the first picture, the view of the rink is still extremely good and is a great bang for the buck, coming in at only $129 face value.

The higher you are, the more you'll be able to see. However, those who are sitting midway up the bowl to about three quarters to the top of the bowl (i.e. above the maize block M in the third picture) will have the best views. I doubt that being extremely high up or far away from the rink is truthfully going to be a problematic phenomenon here, but every person has his or her limits.

It is very important to stress that Michigan Stadium is one of those venues where there is truly no "bad seat in the house." The architecture leads to nearly perfect sight-lines for football, and even better ones for hockey. Whereas playing a hockey game in a baseball stadium offered some unique views and obstacles to say the least, the NHL picked a winner in hosting the game in Ann Arbor, as very few of the same problems from Philadelphia or Fenway (G-d forbid Wrigley), if any, will be encountered.

Nitpicky consumers may have a thing or two to say about the flag pole in the south end zone, but it's nothing at all, truthfully. The net holders in both end zones, used for field goals during football games, will not be obstacles either.

Again, if you're in rows 1-10 close to the field level, then I'd be a little bit worried. This is not a stadium where watching the game on the scoreboard is a viable no-frills option if you are stuck with a seat you don't like. If you don't like where you are sitting, try to speak to customer service or just walk around and find a standing location to watch the game from. There are some gems to be found in the standing room only department. After all, how else does Michigan Football break all of its attendance records?

*Note on the video: This video was taken during U of M finals week, specifically on December 12, hence why the boards are missing. I was freezing; I did mess up and stutter a bit. A couple of funny notes: I slipped while going down the steps to record this and caught myself on the railing. I probably would have had a nice concussion and a broken bone or two had I not had a good reflex there. In addition to that, while recording the ice truck video, my fingers went numb because I took off my gloves. They got better about twenty five minutes later, just in time for me to have to record another one. And thanks to Michelle for doing a bit of editing on the video as well.

This is part of a series of posts leading up to the 2014 Bridgestone NHL Winter Classic® . Feel free to check out the H2H3 pledge drive for the Children's Hospital of Michigan Foundation. You can also text KIDS to 85944 to donate $5 to make an easy donation (full details here).