I just got back from a day at Comerica Park for the Winter Classic Alumni Showdown and I wanted to share with you the experience.

I'll tell you honestly that I didn't do any of the peripheral stuff they had around Comerica over the last two days. There's been essentially a mini-carnival set up just outside the Tigers' stadium and I've walked right past it twice on the way into the stadium to watch hockey. There's a reason for it and it's tied to this post I wrote in April.

But the game? The surrounding hoopla? The blatant cash grab and the way my participation essentially helps turn this whole thing into a prom that the NHL is taking its sponsors to in order to prove they didn't ruin their own brand? Man, that part makes me feel raw and it makes me feel kind of stupid for wanting to go and take part in proving that the NHL can live without me a whole lot easier than I could live without it, apparently.

That's how I felt about this stuff since the lockout ended and it's still festering in there when I see the big party they've set up for the fans and the sponsors. I know it's a celebration of hockey, but it's just nagged at me that two times in a decade they've pulled back the curtain on the state of the sport and shown us that behind all the fun stuff there's a business lurking behind the scenes turning all the pulleys and oiling all the gears.

Then this happened between Games 1 and 2 of the Alumni Showdown and it cleared that from my head. 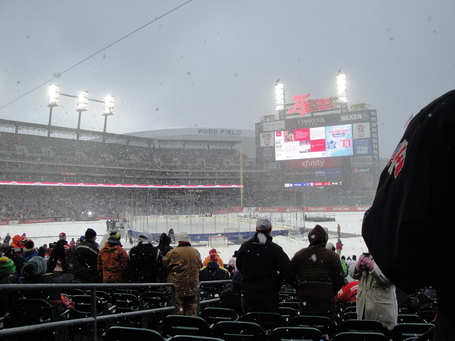 The picture doesn't do it full justice, but those are those big fat snowflakes the kind that you can catch on your tongue.

I was already enjoying myself by the time this happened. Hell, this wasn't the first time the skies opened while we were at Comerica to watch hockey, but this was the first time it felt like more than just winter weather. This felt magical.

The snow cleared up pretty quickly and the stands filled back up for Game 2 of the Showdown (there were probably twice as many people in the stands for Game 2 as were there for the first match). By the time player announcements took place, the curtain behind the game was firmly back in place and what was left was an amazing spectacle. I'm sure that if you saw it on TV, you heard the cheers, but nothing can compare to the atmosphere of the stadium when they announced the Russian Five, to include Vladimir Konstantinov, as the Wings' starting lineup. 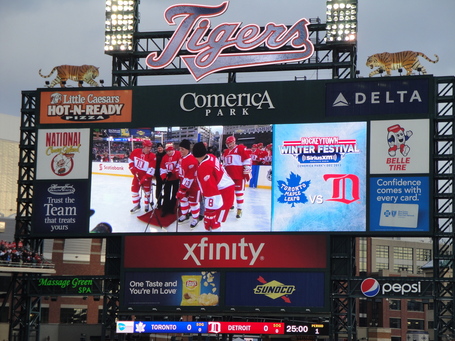 That group of people, my friends, is what made me a Red Wings fan, and to see them all back together on the ice brought me back to a time before I even knew there really was a curtain to begin with. It might not have been snowing when that happened, but it sure seemed dusty in that stadium for this moment (and for a number of moments to follow).

The games themselves were fun for All-Star exhibitions. Both were closer than they probably should have been, but for meaningless fun games, I very much enjoyed watching each, even the honorary Mathieu Schneider relegation game earlier in the day.

I've had a great deal of fun in the last three days catching up with some of the amazing people who make up the Red Wings' fanbase. Today, I fell back in love with the game itself. I can't wait for tomorrow.