NHL Realignment: Could The Red Wings Be Moving East?

Hockey Night In Canada gave us a glimpse of what the new realignment could look like.

Share All sharing options for: NHL Realignment: Could The Red Wings Be Moving East?

Saturday night we basked in the glow of the Red Wings' glorious 4-0 victory over the Nashville Predators, but during the game we were made aware of some interesting information by CBC regarding the proposed realignment.

For a quick history lesson, remember that in December 2011 it appeared that there was an agreement to have 4 "conferences", where each conference would send their top 4 teams to the playoffs in an homage to the old divisional-style playoffs. However, too many people felt that the Eastern conferences were given too much of an advantage by being only 7 teams each while the Western conferences had 8. The Red Wings were also to remain as part of the West but were supposedly promised a more balanced schedule.

That proposal was scrapped, but tonight we got a picture of a new plan which is very different than the first one: 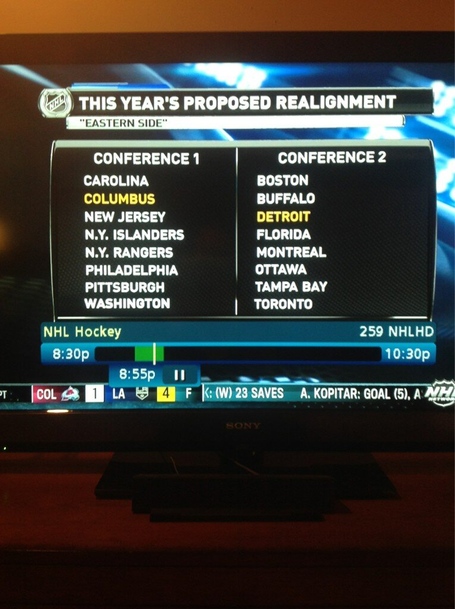 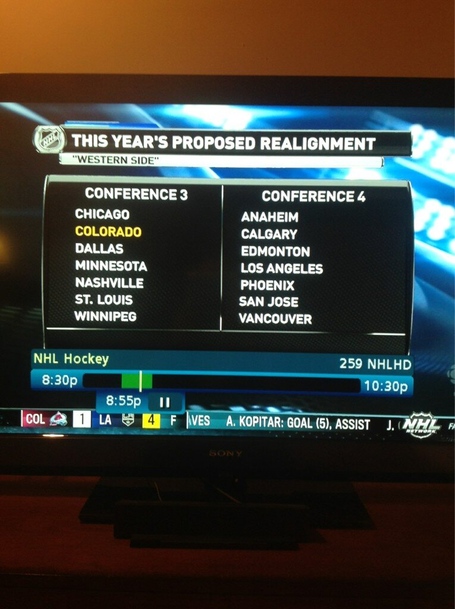 That's a lot different than what we're used to seeing.

Initial reaction: I love it. They're in the East where they belong, and they get to rekindle a few Original 6 rivalries with Toronto, Montreal and Boston. They will get a chance to play Pittsburgh and Philadelphia more, two teams that I think would be fun to hate. Then there's the fact that we will finally get a chance to see if the Wings can beat the Islanders on a regular basis.

I hate the idea of the Wings not being in the same division as the Blackhawks. Chicago-Detroit is a rivalry that exists in every sport, but in hockey it's a historic rivalry on par with Montreal-Boston and Toronto-Montreal. However, the fact that they're pretty good now and the Wings aren't means we're getting out at the right time. I won't miss the asshats in St. Louis (except Hildy, who is awesome) or Nashville. Columbus? Meh.