Looking to see what the Red Wings are doing wrong on the power play lately and recommending the best possible solution to turn it around.

I've decided to use the most-recent Chicago game as the example here because it was the one where the highlight reel gave me the best picture of what the Wings are doing wrong. While a successful power play is a nuanced ballet with numerous moving parts and myriad positional advantages taken and lost in a manner of seconds, I think I've been able to boil down what the Wings have done wrong using a single still shot. Let's take a look: 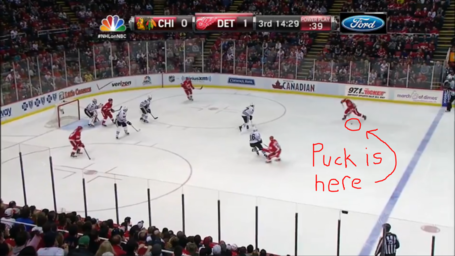 As you can see, Detroit has the puck at the top of the zone against a tight Chicago PK box. They have a net-front guy as well as two guys down low for options. They also have one more person on the ice than Chicago does.

You can clearly see the problem here, but just in case, I've drawn it out for you. 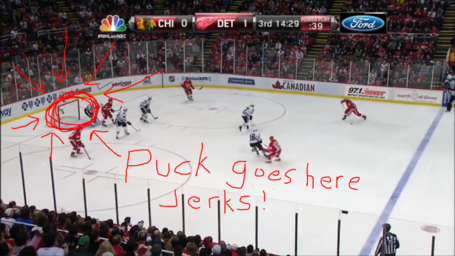 So there you have it. The Red Wings obviously have the puck about 50 feet away from where it should be and are failing to use their hockey sticks to put it in that circle area where it goes. The Wings should try harder to move the puck into the circled area.