The Red Wings were awful, and deserved to lose.

I've only been to Ohio one time in my life. I used to drive a truck for a moving company, and I had to go down to Troy, OH for a very small move and deliver a few items. It was a 10-hour drive by myself in a truck with no radio. About an hour outside of Columbus I began to get thirsty, and I pulled off the highway and managed to find a Tim Horton's. It was the only redeeming thing about a very long and tedious trip.

And yet that was more entertaining than today's game. The Red Wings, fresh off a 7 game stretch where they had gone 5-1-1 since last playing these Blue Jackets, saved us all the embarrassment of blowing a lead to Columbus by just playing terribly from the opening faceoff. They did absolutely nothing right in their worst performance since opening night, and it resulted in a deserved

The Wings didn't show much heart or intensity in this one, but the fans sure get fired up after a loss. 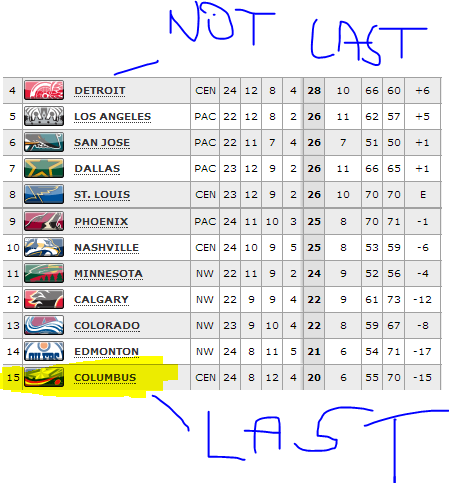 Overall that was a highly disappointing performance against a bad team that was missing a lot of their better players. The Red Wings won't have time to think about it because they're right back tomorrow against these same Jackets at the Joe. It's the first time 12 years the BJs have won a season series against the Wings, so congrats to them. Too bad it will never happen again.