Things I have Read This Week Which Make me Laugh: Knowing the Rules Edition

Share All sharing options for: Things I have Read This Week Which Make me Laugh: Knowing the Rules Edition

Did you know there was a goal last night that shouldn't have counted for the team that scored it?

Of course you did. However, if you're a Blackhawks fan who doesn't know the rules of hockey, then you have the wrong goal in mind. Let's get to the Twitter:

The position of the player’s skates and not that of his stick shall be the determining factor in all instances in deciding an off-side. A player is off-side when both skates are completely over the leadingedge of the blue line involved in the play.

A player is on-side when either of his skates are in contact with, or on his own side of the line, at the instant the puck completely crosses the leadingedge of the blueline regardless of the position of his stick. However, a player actually controlling the puck who shall cross the line ahead of the puck shall not be considered "off-side," provided he had possession and control of the puck prior to his skates crossing the blue line.

Now, here is where Franzen gains possession of the puck: 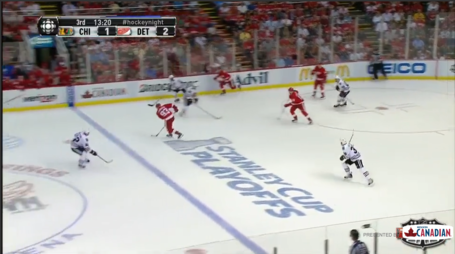 +1 for knowing the rules, geniuses.

In fairness though, even Brian Hedger, who writes for NHL.com took up the mantle here before coming around to the right side. He already deleted the one where he called somebody else wrong for knowing the rule, but at least he owned up to it.

Just to be clear ... always was under presumption puck had to cross first. You learn something new every day. Rule 83.

Yep. So the guy who writes for NHL.com is now better-aware of how the league's rules work.

(To wrap up this learning experience, @HawkeyTown_USA has also since come to understand how wrong he was when he was spamming everybody who would listen with links to his picture "proving" Franzen should have been whistled. Still, it makes me laugh that stuff this rudimentary can gain so much traction.)