Alternate title: Wherein I Learn Just How Small a Man Patrick Kane Can Be, Much to My Delight!

Read on for the full explanation - and visuals. This is a follow-up to my previous post here.

Not to be too self-indulgent about my experience last night on the glass at The Joe, but I wanted to create this follow-up post to share a few anecdotes, show a bit of what you couldn't (but Patrick Kane definitely DID) see, and thank you folks for the ideas that made an already extraordinary affair for me that much cooler. What I conceived as a short post became my personal memoir of the night. This all get less wordy and more picture booky as we go, so bear with me, or just skip the verbosity and see the fun stuff further down.

After a night and morning well-spent, ready for the raising were Giant Jimmy Face on foamboard, Enlarged-and-in-Charged Mrs. Donna Kane on foamboard, unmounted backups of each (in the event the big boards were no-no'd at security) and the following five of "her" choicest quotations, along with five blank speech bubbles - just in case. Unfortunately, these weren't visible to the TV audience, but Patrick saw them...Oh did he see them.

In the order in which they were shown

After several deep breaths and the chirp of the barcode scanner, I did my best to fly casual, but briskly, past the kindly folks who screen for killers, and profane signs apparently, among the visitors to The Joe. I was not successful. Something about the 4 ft poster of Jimmy tucked under my arm made me a bit conspicuous SOMEHOW.

The first usher, name erased from memory by the beer consumed later, asked politely to preview "what I had there". Me: "Oh, sure. Well, that's Jimmy." Usher: "Yea, and who's this one?" Me - choosing the foolish valor of honesty: "Donna Kane". Usher:<raised eyebrow> Me:"Patrick Kane's Mom". What followed, three seconds of stunned silence and a bewildered expression from this Usher felt like a minor eternity, then Usher:"You're serious?" Me: "Yup" Usher: <siiiiiiiiiiiiiiiigh> "I don't... Jim, look at this." Jim, his supervisor, is a credit to Olympia Entertainment, Hockeytown, and humanity. He took a look at the sign, repeated the question about the mystery woman's identity, then tried VERY hard to stifle a chuckle, but failed, and gave me the OK - on condition that I not disrupt anyone's view of the play with Donna's proud smile and thoughtful contributions to her son's big night.

Then it was time for the individual caption boards to pass review. Each got a pleasant little snorted laugh and the thumbs-up from Jim, except the 5th and final sign - the Zetterballs homage. In retrospect, that may owe to my highlighting the words "Zetterberg's, Royal, Swedish, Balls, and Tasty", but I was willing to concede that one for the greater trolling good. It would not be the only casualty on the night.

Chapter II: Patrick the Lesser or What Happened to the Mounted Mrs. Kane?

Before the game even started and long before friends would text me shots of Jimmy-sign on NBCSN, it was all worthwhile. With half a troll-boner (full disclosure: a full one), we charged our way over opposite our seats to the Blackhawks's end for warm-ups. And arrived way too early. So we waited. And waited....

And suddenly there they were. Bedecked in all their nauseating, uh, THEM-ness, Patrick and co took the ice - and Donna took to the glass to greet her son. Her first message concerned the length of his helmet-escaping curls of pettiness and a certain missed appointment that might have tended that ugly mop of his. It took several rotations around the rink for him to notice HIS OWN MOTHER, but he did, and the reaction was instant, priceless, and unambiguous. He stopped, stared his very most earnest I-hate-you-and-I'm-telling, squinty-eyed, bratty pout toward us and went red in the face. Unfortunately, I was too giddy and too busy blurting "We LOVE YOU, PATRICK" and "MOMMA'S HERE, PATRICK, MOMMA'S HERE" to think about snapping pictures. Meanwhile, Ouduya, Toews, Stahlberg, and, maybe Keith, each took notice in turn and tried not to laugh, but did, and smiled our way - they cool.

Kane spent the next few minutes trying, but failing, to avoid eye contact and hovering along the other side of the rink. Eventually the warm-up drill forced his return toward us. Up went Donna's rhetorical about being more like Zetterberg. He looked again directly at the sign. I toasted him with my beer hand and gave him a wink. He tensed noticeably and beared down hard on his shot. And missed. Badly. I was flooded with dubious but grand estimations of accomplishment. Had this little display, of the MILDER quotations only yet, mind you, really gottten to him? Nonsense. He's a pro, right? Something like this is beneath his consideration. It HADN'T. No way. Little did I know we were about to find out. It had. Inarguably.

With no attempt at subtlety whatsoever, Patrick shot us another glance and skated straight to their bench. He leaned over, had a brief exchange with the staff hovering around the tunnel, gestured in our direction, then rejoined the warm-up. No more than 90 seconds later an usher came straight to our little troll-dom in the corner. This usher was no Jim (see Chapter I). Usher Not Jim: "Who is that?" Me-again with the stupid honesty:"Patrick Kane's charming mother, Donna". UNJ <reaching for the sign>:"I have to take that". Me <realizing surrender was inevitable but hoping for the pleasure of an answer-THE ANSWER>:"May I ask why? Your supervisor screened it at the door and said it was ok." UNJ:"All I can tell you is Blackhawks's security has demanded it be taken down". And he snatched the sign.

I. WAS. FUCKING.... Gleeful! Wait. Titilated? I don't know quite the word to express my degree of delight and the shear satisfaction of knowing it bothered him - it REALLY bothered him - not to mention the real and personal confirmation that he's every bit the thin-skinned little brat I've presumed him to be. If that strikes you as odd, or you imagine I might have been more upset at the lost opportunity to troll with Donna in-game, you forget (as the usher failed to ascertain) that I had a backup. So while the Lovely Mounted Mrs. Kane never saw the bright lights of the NBCSN cameras, the printed and rolled copy sitting on the the chair the usher bumped as he confiscated the other got plenty of airtime, as did the other quotations, and continued to pester poor humorless Patrick, as you'll see.

Chapter III: Wherein I Shut Up (Mostly) and Expand on What You May Have Seen

So the rest of my night on the glass was fairly well documented and already remarked on by others here. I won't go into narrative mode on all the details as I've already TL;DR'd the hell out of this post. But those of you who made it this far, or scrolled down this low, now get a brief collection of highlights and visuals of what you may have seen, and with a few captions along the way.

This view. No photo will do it justice. I was in awe. Backside of both Jimmy's pictured, so to speak. 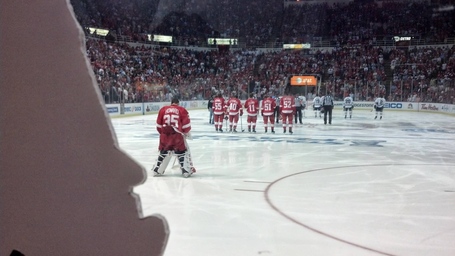 In case any of you were wondering what I looked like without a giant head in front of me. 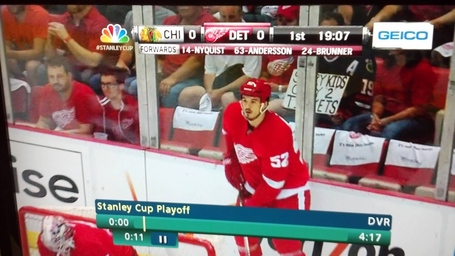 Speaking of that giant head, we spent the 1st keeping the backup a secret and celebrating Jimmy's saves like so. This got the most airtime and was most recognized, so I'll just include two favorites, no explanation required. 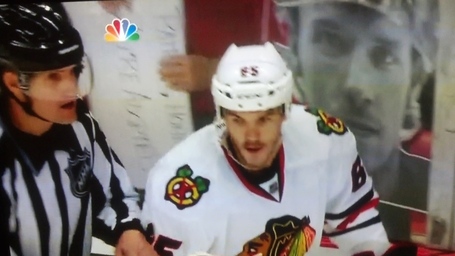 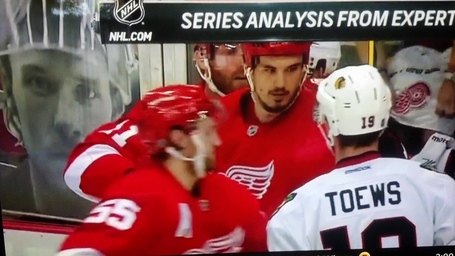 Starting in the second, we deployed the backup and reintroduced Patrick to his momma. Every time he was on the ice for a stoppage in our end thereafter, we held her and a quote up. He looked often. The first time, he was noticeably surprised to see her reappear. NBC seemed determined not to give her much TV time, but I found a few choice moments that made it to air.

The gang all together. Donna's informing Patrick about his adoption. 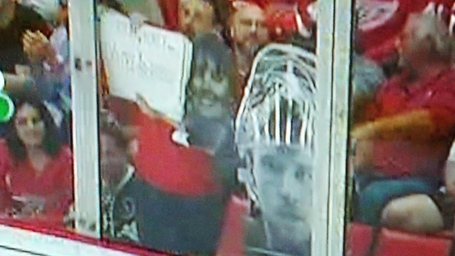 Closeup of the adoption sign seen clearly legible on NBC (for J.J.) 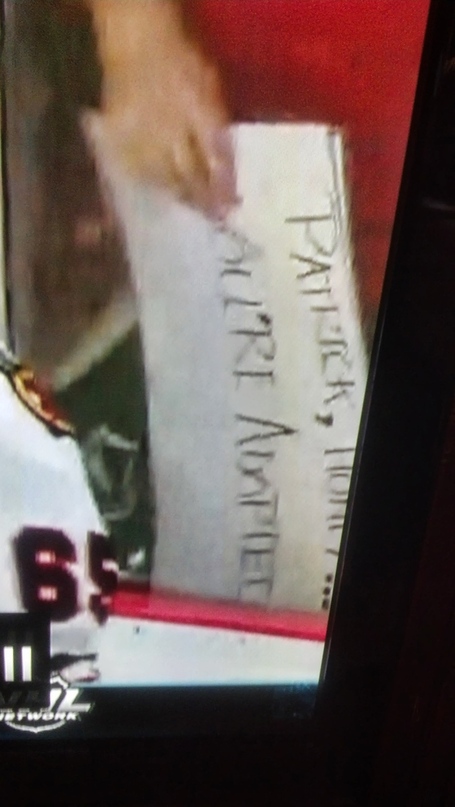 Mom informs Patrick about her dinner plans with Pavs at this point. He was not amused. 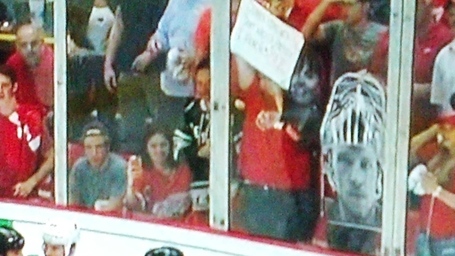 And, finally, my favorite moment captured by NBC, Patrick and his mom together at last. Right before this, he gave another disgusted look our way. The adoption sign was up again, right in front of him. 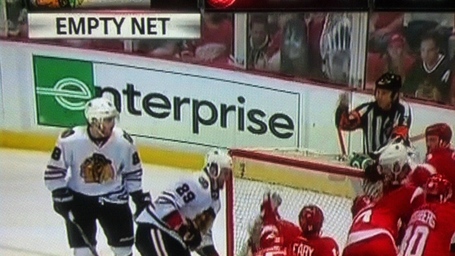 Also part of the experience but not documented visually were several moments I want to commit to posterity here, including a handful of acknowledgements, nods, and smiles from Wings players, the handful of occasions when Kane's glance and reaction were so apparent that the crowd around us pointed it out and chanted along with us at him, me planting a peck on Donna's cheek before the 2nd with him looking on, and, possibly my personal favorite late in the third, when Jimmy, after making another big save, looked our way and responded to my toasting him by raising his glove and giving us a wink.

So there you have it, my verbosity and my thanks. I couldn't and probably wouldn't have done it without WiiM - and I am so damn glad I did.

(I have dozens and dozens more images. If anyone's interested, maybe I'll post a miscellaneous album on imgur and provide a link in the comments.) UPDATE: It was requested. Link to a full album.