Share All sharing options for: Off-Day Updates: Power Play Lines Shuffled, DeKeyser gets his Cast Off

Lots of random stuff to talk about today, so we'll do it kind of like a midday Quick hits.

Danny DeKeyser expects to get cast off today. Moving closer to possible return at some point in playoffs.

That's a huge bit of wishful thinking, but I like the news. DeKeyser broke his thumb two weeks ago. With the severity of the break and the need to have screws inserted to fix it, this is more a 6-8 weeks thing than a 4-6 weeks. If Dan DeKe can heal as fast as Ottawa's Erik Karlsson, we'd miraculously see him about midway through the conference finals. Otherwise, we're looking ahead two series. That's... well that's a lot of looking ahead, even as confident as we are right now.

Next up, on the power play:

Looks like Babcock will keep his top two forward units together on PP to try and get things going. So Nyquist off PP. Blue line stays same.

I keep going back to the conversation I had with Michael Petrella earlier this season about the power play and how you need grinders out there. I've been impressed with about half of the Wings' power plays so far in this round, but none of them have gotten results and the sentiment about needing to be tougher on the puck keeps coming back. The Chicago PK is aggressive on the half-boards where the Wings like to play with the puck, often out-manning with the two near-side PKers while the other two move to the middle of the ice. The Wings need more puck support there to get it out of that scrum sooner and will need to move the puck much quicker to keep the Hawks from readjusting.

I don't know necessarily that Nyquist has been the problem on the power play, but I do think the 2nd unit needs a bit more angry on it. I'd personally give Filppula's role as the zone-entry specialist to Nyquist and move Flip either off the PP or to the front of the net for a short time. I know that Filppula doesn't exactly strike fear as a Tomas Holmstrom-type, but you'd be surprised at how well stick-handlers can take defenders' attention away from loose pucks.

Either way, I'm not questioning Babs.

Elsewhere on the Wings

Gregg Krupa was a quote machine on Twitter today in regards to Babcock Quotes. He talked about everything from Danny Cleary's play (which he likes) to Patrick Eaves to his planning for the series and home ice and about Jimmy Howard's goaltending. Just check the timeline, really. There's a lot of good stuff there.

Doesn't look like Andrew Shaw will be benched for being a penis. That's too bad....

Andrew Shaw in this series has been everything we were afraid of with the Jordin Tootoo signing. He's providing the kind of physicality that I'm sure the team wants, but he's also crossing the line at just about every opportunity and he's costing both himself and his team the benefit of the doubt on calls. If he doesn't reign it in, the guy's going to find himself suspended sooner or later.

First off, the Kings handed a radio DJ the controls of their Twitter account last night and it went poorly.

We apologize for the tweets that came from a guest of our organization. They were inappropriate and do not reflect the LA Kings.

That's just the aftermath of the situation after Kevin Ryder of Kevin & Bean did a terrible job wording what should have been an innocuous joke and ended up making light of rape. 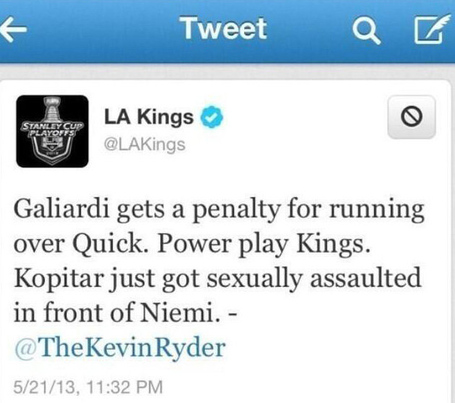 Ryder did tweet out an apology about how he worded it poorly (before jumping on the defensive about his critics sensationalizing it, apparently).

There's no need to defend it because he deserves the scorn he gets for having chosen his words this poorly and it's up to every individual to decide whether they're going to forgive him for this or not. It's a dumbass choice of words there to specifically say "rape" or "sexual assault" because there's no metaphorical ambiguity there. You could probably get away with saying "molested", because that word carries definitions which are not necessarily sexual in nature, but that's a semantics argument we can have in the comments.

I'm having trouble imagining why the Kings were dumb enough to hand over the controls of their public face to a radio jockey. I'm not particularly known for being ever classy and respectful in my tweeting. There's a good chance that the heat of the moment during any game would cause me to say something that would offend. This is why it's a bad idea to hand the reigns of the official team account to somebody with anything less than the utmost respect for what and what isn't offensive.

Did you know? @sanjosesharks' Jumbo Joe has been on the ice for 17 goals for and just one against in the playoffs. #BecauseItsTheCup

Oh hey, that's cool. Did you know that 10 of those 17 goals were on the power play and that Thornton has played a mere two minutes of penalty kill time in his team's 8 games? He's also done this against 2nd-line competition (from 3 & 5-seeds). It's cool when things work out this well for such an obviously talented and likable guy like Joe Thornton.

Side note: any Sharks fan who has seriously used the terms "Todd McLellan" and "hot seat" together should hand in a fan card.

I haven't blustered a lot about this series because watching the Hawks lay waste to the regular season is what I needed to see to have any level of worry that they'll rattle off three consecutive wins against any team at any time. We've seen teams more talented than the Hawks fall apart at the first sign of adversity and we've also seen teams with less talent fight through it and come out on the other end stronger. I'm hopeful and even a bit optimistic about Detroit's chances, but really I'm just enjoying the ride these playoffs have been and I'd rather not try to talk about the next twist or turn coming up because that's not really going to add to my enjoyment.

I will say this though: The way Mike Babcock has lead his team through 10 playoff games against teams coached by Jack Adams finalists has me more convinced than ever that he's the worst snub for award recipients in the NHL in recent memory. If whiny Kings fans want to bellyache about how Anze Kopitar gets no love for the Selke, then that's their problem, but Babs not having a Jack Adams is becoming more and more embarrassing for the league each year.