It's Time to Get Over your Inferiority Complex, Basketball. Hockey Rules

If you buy something from an SB Nation link, Vox Media may earn a commission. See our ethics statement.

Share All sharing options for: It's Time to Get Over your Inferiority Complex, Basketball. Hockey Rules

Every year around this time, two sports come to an end. Both the NBA and NHL wrap up their postseasons, hand out their trophies, and turn back around quickly to start up their draft/free agency periods. Since President Obama and Prime Minister Whatshisname passed the joint resolution confirming that it was, like, really weird to enjoy both sports, we often have a little bit of friction this time of year as horribly jealous basketball fans scream from their perched inferiority complexes about how jealous they are of hockey.

I'm sorry that I had to be the one to leave the cone of silence on this one. I know that hockey fans are far too noble and intelligent to stoop this low, but somebody has to break it to the NBA that they are an inferior league playing an inferior sport. I'm not doing this to be mean (ok, maybe a little). I'm doing it so the NBA stops embarrassing itself. Maybe they can learn a bit here and do things better.

The NBA is so minor-league that they have teams in places like Utah. In fact, four NBA cities overlap with places that are so unimportant that the NHL has placed minor-league affiliates there as kind of small-market space-savers. Oklahoma City, Charlotte, Houston, and Milwaukee all have NBA teams struggling to take eyes away from minor league hockey in those hotbeds. Heck, there's even an NBA team in the less-important Portland while the AHL took up residence in Portland "the Good One", Maine. Good job, NBA. You want to move a team to Grand Rapids soon? I mean, I don't know where "Golden State" even is, but it's probably even harder to find than Bemidji State, which has a well-known hockey team and they're even BELOW the level of the AHL competition-wise!

Then you have the NBA trying desperately to cleave to markets where the NHL has already learned it isn't worth even trying to keep a successful hockey team. I'm talking places like Atlanta, Denver, and Phoenix. [ed note: update in August]. I don't know who they're trying to fool with the colorless Hawks (shamelessly knocked-off, BTW), but there's nobody in Atlanta. It's pretty silly trying to make a sports team work there. Moving to a bustling metropolis in Manitoba is the smart thing to do with that waste of a franchise.

Let's not forget they're trying out crazy new markets too. Brooklyn? What self-respecting professional sports team even wants to give Brooklyn a shot? They don't like sports in Brooklyn you silly, sad hoops-lovers.

So enjoy your terrible cities while you waste away in civic events centers shared by two-bit circuses and small-potatoes concert acts. You'll never live up to the great hockey venues like the United Center, the Staples Center, and of course Madison Square Garden.

I'm sorry that the NBA got relegated to pretend sports networks like ESPN, who so blatantly sell only their own brand that it's not even worth mocking, and to cable drama carriers like TNT, where you can find the "sport" only if you first commit to watching a new episode of the hit show 'Castle'. It probably stings to force your ratings to be bolstered by Rizzoli & Isles, but when you can't get an entire television network like the Outdoor Life Network to *CHANGE THEIR FREAKING NAME* for you, I guess you take what you can get.

Maybe if the NBA had anybody as insanely marketable and charismatic as Washington Capitals center Nicklas Backstrom (who can easily make 15 goals in 15 seconds), your television footprint could come off of channels that I'm not even sure I can get at the hotel rooms in which I stay when I travel.

I don't know about you, basketball fans, but if I were in your sneakers, I'd thank hockey for taking enough of a break to let your sport recover from that embarrassing lockout your dummy commissioner put on a while back. That guy has all the people skills and grace of Leatherface stuffed into Tim Gunn.

Maybe it would help the NBA if David Stern were to shadow Gary Bettman for a while so he could learn a thing or two about how to successfully run a league and connect with the fans. No other commissioner has the kind of rapport that Bettman has with hockey fans, who wait with bated breath at the end of each Stanley Cup Final series to see Bettman emerge from his self-imposed public exile (the exile is so as not to water down the moment) and bask in the loudest chorus of support we've seen since America decided to join WWII.

Just think, this is an ANNUAL event to which fans very much look forward and your hack commissioner doesn't come close to warranting such a response.

Perhaps you and I are different, but I expect a modicum of player decorum from my playoff MVP superstar. 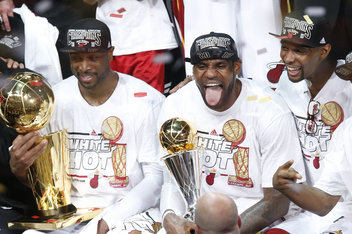 That's absolutely disgusting and classless. We all know what the tongue is: it's a slimy tube of muscle that's used in any number of disgusting acts. The only time it's acceptable to show your tongue is to your spouse or doctor (and only certain kinds of doctors, mind you).

Jonathan Toews would NEVER do something like this. I mean... Toews isn't the playoff MVP, but judging on the comparative uses of pronouns that some intrepid soul counted, LeBron James speaks only for himself when asked questions about himself while Jonathan Toews and Patrick Kane are made completely indistinguishable thanks to his insistence on always saying "we" when asked questions. They're the same person.

Being as such, sometimes you do have to stick out your tongue. Maybe you're eating ice cream? Maybe you're cartoonishly parched? That was the case with the young and classy Kane earlier this week. You know what his solution was instead of exposing such a grotesque organ to the world? He covered it in a way that also made children continue believing in magic. 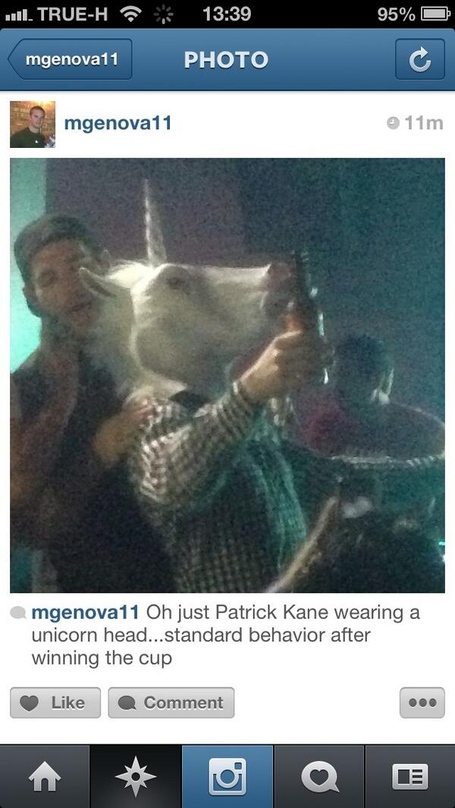 That's a hero folks. Not that clown LeBron.

Also while we're at it. Really, Chris Bosh? Photobombing? Grow up. Nobody does that.

We don't need to go there. Your shit looks like gilded clip-art.

This is the big one and frankly I'm disgusted that America even allows the NBA to exist with how the league is so chock full of criminals and poor role models. From the lifestyle the players support to the cars they drive to the clothes they wear, it's just ridiculously amoral. Many of them even listen to music which supports violence, property damage, casual drug use, and other horrible things. Overall, you should really try to be more like hockey in this.

In the end, it's clear to see why nobody who likes hockey also likes basketball. We're simply superior in every conceivable manner. Also, we only give one timeout per game. Get that shit sorted out, basketball.