It's a month-by-month breakdown!

After days of anticipation, it's finally here. The Red Wings schedule has officially be released. The highlight of the schedule is obviously the Winter Classic against the Maple Leafs at the Big House, but lets take a look at the schedule month by month to highlight some of the other games to look forward to. 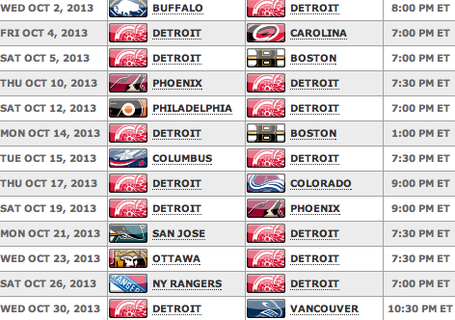 It's still weird seeing so many Eastern Conference teams on the schedule. The Wings open up with an Atlantic Division foe, the Buffalo Sabres. Obviously the two biggest games of the season outside of the Winter Classic take place on October 5 and 14. Detroit completes it's trips to Boston in the first two weeks of the season. I will surely be taking work off both those days and traveling to the Garden. Daniel Alfredsson will face his former team for the first time on the 23rd, although it will be at the Joe. 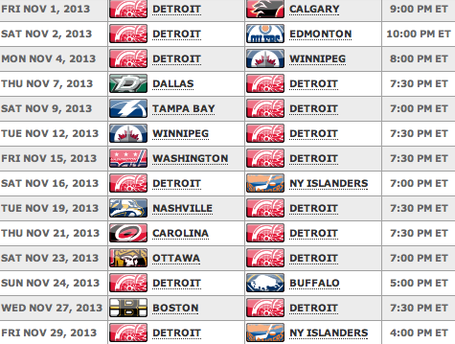 The Wings start November in western Canada before coming home to welcome back Jim Nill and his Dallas Stars on November 7. Two nights later, Steve Yzerman and his Tampa Bay Lightning visit the Joe. If only Sergei Fedorov's CSKA Moscow came to town on the 11th to complete the hat trick of former Red Wing GMs. The Wings get to beat up the Predators on Nov 19. The Wings have two scheduled losses on November 16 and 29. 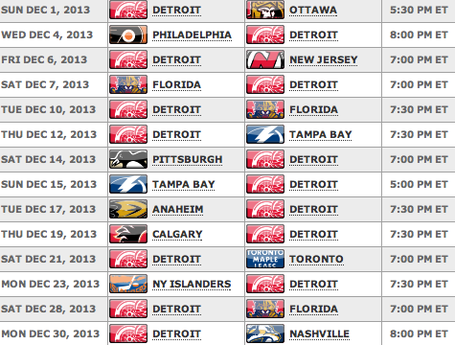 December kicks off with a bang as Alfredsson returns to Ottawa for the first time. The rest of the month is sponsored by the state of Florida. The Wings have 5 total games against the Panthers and Lightning. The Pens come to town on the 14th and the Ducks visit on the 17th for a first round rematch from last season. We also get a little Winter Classic preview on the 21st. 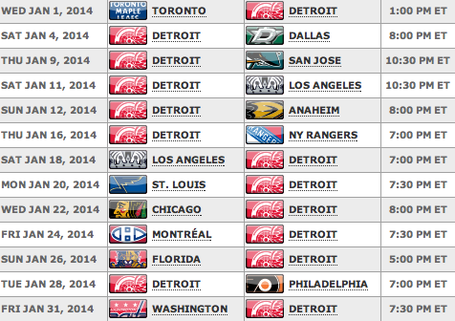 January will be a fun month. The Winter Classic starts the festivities on the 1st. Then the Wings head out on a five game road trip going from Dallas to California to New York City. After that it's a season high five game home stand highlighted by the first showdown between the Red Wings and Blackhawks since last season's playoffs. Two nights later the Wings host the Canadiens for the first of four match ups between the Original Six rivals.

Only one home game in February. The Wings play on my birthday in Florida so chalk that up as a loss. There will be a 17 day break for the Olympics in the middle of the month. USA is the best. Suck it, Graham. 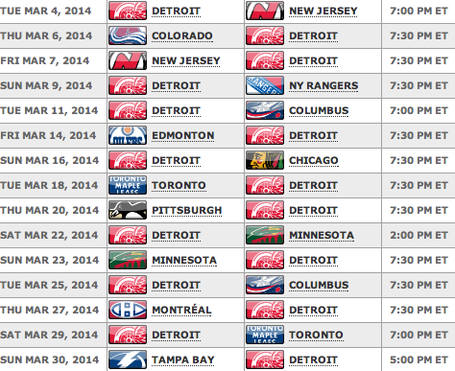 It feels like there are a lot of games in March and the Wings are all over the place. They play the Devils twice, visit Chicago and hold a home-and-home series with the Wild. From March 20-30 the Wings play 7 games in 11 days and alternate home/road every outing.

The Wings begin the final month of the season with four games against fellow Flortheast Atlantic division foes. After that it's a date with the Pens and Hurricanes before closing out the season on the road in St. Louis. Wouldn't it be awesome if the Blues had to win the final game of the season to make the playoffs… and the Wings shut them out?

Ultimately this schedule is full of new faces we don't see often. Only seven games start at 9p ET or later and there are a ton of 7p ET starts. Welcome to the Eastern Conference, folks. This looks like an Atlantic Division winning schedule to me.