Aahhh, it's good to be back. So, here we are, stuck in the doldrums of hockey-less summer. Oh sure, it starts with occupying ourselves with other things, refreshing twitter every 10 seconds for news of any trades or signing, free agency, post-free agency, and then meaningful hockey news dries up and we're left rocking in the corner in a puddle of our own drool and mumbling things like "that hitman better take care of Samuelsson pretty damn quickly, or I'm going to demand a partial refund" and "heh.... heh.... Toronto". Take heart my Hockey compatriots! It's only 22 days until the Prospect Tournament, and if you can't make it for that; it's only 29 days until Training Camp. If that does little to bring you comfort, then rest easier knowing it's only 33 days until pre-season and a measly 49 days until honest to goodness NHL hockey starts back up!

To help tide you over until then, here's last week's photo along with the winning caption by EthrDemon 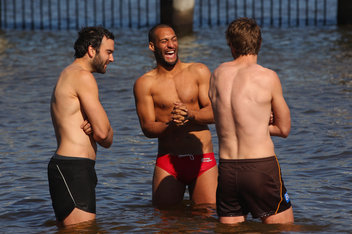 They said the Saddledome would be ready by now!

Come up with as many funny, witty, creative captions for the header image as you can. You may use other pictures or .gifs, as well as genius pulled directly from your ass... er... head. Each rec a caption receives is a vote, so if you like a caption, rec it... rec it good. Whichever caption receives the most votes is the winner. Your prize, for winning such a prestigious contest, will be the praise (or envy) of your peers, as well as internet popularity that will last *forever. *Or, more likely, until the next caption contest winner steals your thunder and your fleeting internet fame vanishes quicker than a Pangalactic Gargleblaster at an intergalactic rave on Betelgeuse when the Aldebarans are visiting.