If you swallow a burp, does it become a fart? I'm asking for a friend...

The countdown continues. It's now only 15 days until the Prospect Tournament and 22 days until Training Camp. If that doesn't blow your skirt up, then how about only 26 more days until pre-season and a paltry 42 days until the start of the regular season.

Last week, KevinN37 came up with the following winning caption.

(Here's a reminder of what the picture was, just in case you'd forgotten) 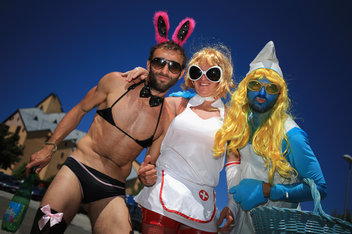 Three of Jiri Hudler's many, many fetishes.

Guess what today is?

Come up with as many funny, witty, creative captions for the header image as you can. You may use other pictures or .gifs, as well as genius pulled directly from your ass... er... head. Each rec a caption receives is a vote, so if you like a caption, rec it... rec it good. Whichever caption receives the most votes is the winner. Your prize, for winning such a prestigious contest, will be the praise (or envy) of your peers, as well as internet popularity that will last *forever. *Or, more likely, until the next caption contest winner steals your thunder and your fleeting internet fame vanishes quicker than a Pangalactic Gargleblaster at an intergalactic rave on Betelgeuse when the Aldebarans are visiting.