Detroit Red Wings Roster Look: Where Do All the Forwards Fit?

Share All sharing options for: Detroit Red Wings Roster Look: Where Do All the Forwards Fit?

The good news for the Red Wings is that they have seven defensemen on their roster with fairly well-defined roles and a pretty well-set hierarchy. Detroit's goaltending situation is also all set, so we don't have to worry about that.

Then there's the forwards. All 17 of them.

The very brightest among you will notice the problem with that number. 7+2+17 > 23-man roster limit. Give yourself a pat on the back. Three people have to go. It used to be two people, but then Dan Cleary happened and now it's three. We had already done the math and made peace with the great unknown for roster space. We narrowed the field of contestants to move down to a reasonable number and made peace with which of them would have to move: Jordin Tootoo, Cory Emmerton, Patrick Eaves, Mikael Samuelsson, even Tomas Tatar were all the most-consistently discussed.

It seems we had it pretty well narrowed down. Those who accepted Mikael Samuelsson (because he's actually not a bad hockey player or because he has a NTC and waiving him hardly helps) could live with Tootoo and Emmerton leaving. Those who couldn't bear to see Tootoo go could make peace with Eaves seeing the door. Those who can't stand not having a seventh center on the roster could keep Emmerton while losing two other players who didn't quite fit.

But then Daniel Cleary happened and the number of permutations increased exponentially. Trying to keep one player at the expense of two is already hard enough when you generally like and can see the good qualities in every person on your favorite team. Now that three have to go, it's like playing FMK with your immediate family. The choices are all uncomfortable and you're not entirely sure why you even have to do this in the first place.

With that in mind, I put together a bit of an oversimplified Venn Diagram laying out where I think all 17 forwards fit in three categories: Playmakers, Goal-Scorers, and Piano-Movers (the gritty, grinding types). Here it is: 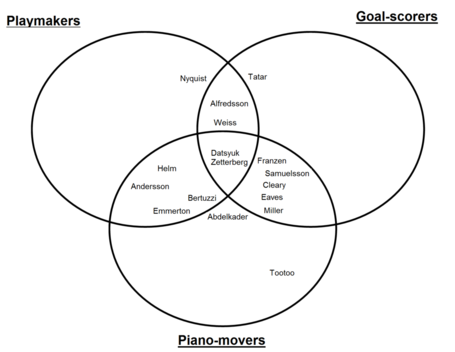 I tried to place players relative to where they are in their roles and even then it's not entirely perfect. In truth, you could probably throw another 2-3 players into the dead center there to join Datsyuk & Zetterberg, but I wanted that space to be more exclusive to showcase how hard it is to be able to do all three of those things well (even though a player's placement in the 2D space on this diagram doesn't actually speak to how well he can perform those roles). The diagram also doesn't account for positions, though Emmerton being a center explains why he's also at least low in the Playmaker/Piano-mover overlap.

You'll notice that the grouping favors the lower circle. 13 of 17 forwards could reasonably be classified as piano-movers to some extent or another. If you wanted to move Datsyuk and Zetterberg up to the Alfredsson/Weiss region between playmaker and goal-scorer then bump Franzen, you could make 7/17 "skill guys."  Mike Babcock likes to run lines with one guy from each group: one playmaker, a goal-scorer, and a troublemaker.

It's not that being able to serve as a grittier-type player means a guy can't have skill, but playing both roles at once is actually something that's fairly rare in the NHL. In the meantime, a team that doesn't want to fill its 4th line with plugs has space for eight skill guys. Making space for a guy who can hold his own and play effectively on the penalty kill to take one spot from the 4th line leaves room for seven.

It's important to note that just because a guy isn't in an overlap doesn't mean he's actually any more expendable or less useful. In fact, I think the relative positioning of three of those players works as a benefit to them. One because he's pretty close to where you'd want a player of his position/skillset (Abdelkader) and the other two because of how NHLers develop. 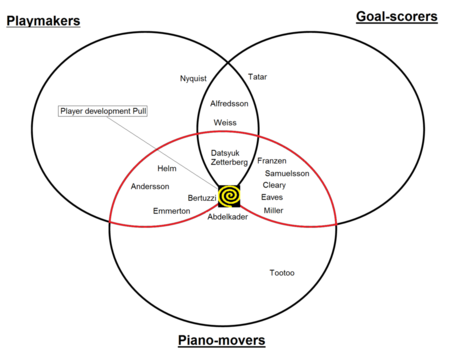 Players tend to gravitate towards the center of this as they age and develop (and also as they slow down in skill). Not everybody does this though. There are two ways a player won't draw closer to the center from year-to-year.

The pull to the middle is generally stronger for young prospects as well. For guys like Nyquist and Tatar, they will naturally get better at dealing with the speed & physicality of the NHL as they play more games against NHL-level competition. Neither of them are likely to develop into a dominant well-rounded players in the mold of Datsyuk and Zetterberg this year (or even next year, if it happens at all), but if they can at least closely track their development (from pretty similar locations on the chart to begin their careers), they should be fine.

Players can and will cross over lines into hybrid roles, but it's pretty rare when a player gets far enough away from his "home" skillset to be considered something primarily other than that (Franzen turning from a most-defensive center into a goal-scorer might be one of those examples). I'd say it's even rarer for a skill player to become less than that.

For this reason, I'm less concerned about the long-term plan involving Gustav Nyquist and Tomas Tatar. I'm not entirely confident because sometimes unfortunate circumstances can lead to less-than-ideal situations with putting together a team, but when it comes to the way the Wings play under Mike Babcock, it seems like the excess among the team's 17 forwards is coming from the bottom of the diagram and that there's enough room for those at the top.

After all, the old saying goes that you can't teach skill. Seems Ken Holland agrees.

Hey @Trto90 I asked Ken Holland about you. He says you are an exciting young player and you WILL be one of the 14 forwards ON THE RED WINGS.