It's just the preseason, but who cares, that was awesome.

The Wings took their 1-1 preseason record to Boston for a Thursday night tilt against the Bruins. Detroit was skating without a few guys, but had enough NHL-level talent to make it an interesting match. From a Wings perspective, it was interesting as hell. Detroit won 8-2 on goals from... well lots of people.

[Here's where Jeff should put his recap. If he hasn't put his recap here and this actually posts at 7am instead of being replaced and the article going up as soon as he was finished writing his piece, it's because he fell asleep or something else happened to him. I hope he's ok]

I left the above text because it was funny.  That's for starting the post for me J.J.

There's a line I hear often watching Bruins broadcasts.  It's a line that Jack Edwards says quite a bit.

"Who has more fun than us?"

Well, tonight, the Red Wings sure as hell had a lot more fun than the Bruins.  And I, for one, had a whole hell of a lot more fun than an arena full of black and gold ho-mahs. Let's not kid ourselves though.  It's only preseason and the game means jack shit, but that was an awesome game to attend.  I'm not going to give you any X's and O's, but the guys that played looked pretty solid via the eye test.

The first player that passed the eye test? 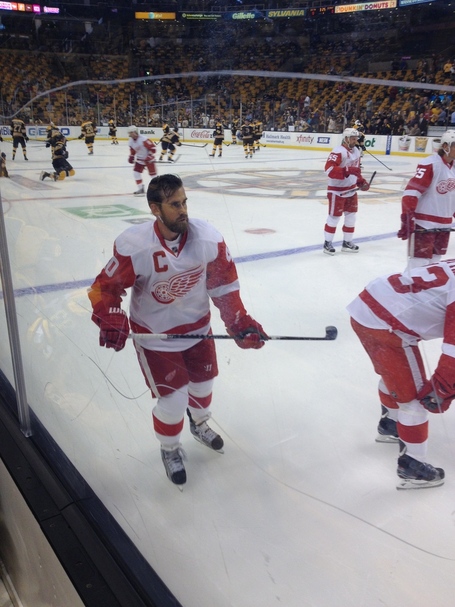 That beard is in midseason form.  Hank was easily the best looking player on the ice tonight.

His Euro Twin (Hi Tyler!) scored the sickest goal I've ever seen in person.  Jakub Kindl should never fight again. Right before the fight, he looked like a Sedin get grabbed by the collar and getting punched in the face and not reacting.  Thankfully he finally did… and then… yeah… he probably shouldn't do that anymore.  David McIntyre also got owned by Torey Krug.  I had mixed emotions about this fight. Krug is a Sparty. McIntyre I hope to never see play in the regular season. Sucks he lost the fight tonight, but yeah, I didn't really care.

Things I Remember That I Was Impressed With:

1. DeKeyser didn't play a perfect game, but man, he's everything we all wish Smith would be.

2. Howard was solid. I distinctively remember a nice save glove side using his shoulder on David Krejci. I also remember once when Krejci said he was better than Datsyuk. Hahas!

4. Bruins fans not punching me when I was acting obnoxious at a meaningless preseason game.

5. Gregory Campbell.  He's a hero. And, no, it's not because he broke his leg blocking a slap shot and continued to play on the PK.  No, because he boarded Mikael Samuelsson.  Play of the game, amirite? Now, truthfully, I never want to see anyone boarded or hurt, but props to Campbell for trying to solve the Wings logjam at forward all by himself.

6. Luke Glendening and the rest of the Wings on the 5 on 3 penalty kill.

7. The sarcastic, mock cheer for Malcolm Subban from Bruins fans after his first save in the 3rd period.

8. Tomas Tatar's energy. He didn't do too much on the stat sheet but I noticed him on the ice.

Other Things of Note:

1. Dougie Hamilton. Was not impressed.  Matt Bartkowski and Torey Krug looked better in my opinion.  There are 2 spots on the Bs blueline open and I think Hamilton is the odd man out if you asked me to choose right this second.

2. I know Joakim Andersson scored, but him and Gustav Nyquist didn't do much for me in this game. I blame their linemate.

3. Zdeno Chara in front of the net on the power play is still a dumb idea, Claude.  It didn't work last time. It won't work this time. And why in the blue hell is Milan Lucic taking faceoffs on the power play?  I hope that's just a preseason experiment because…umm… that's dumb. Really dumb. Like this dumb.

5. Stephen Weiss reminded me of Mike Modano, but I think that comparison starts and stops with his number. 90 is still so weird see on the ice.

6. Who thought buying THAT jersey was a good idea? 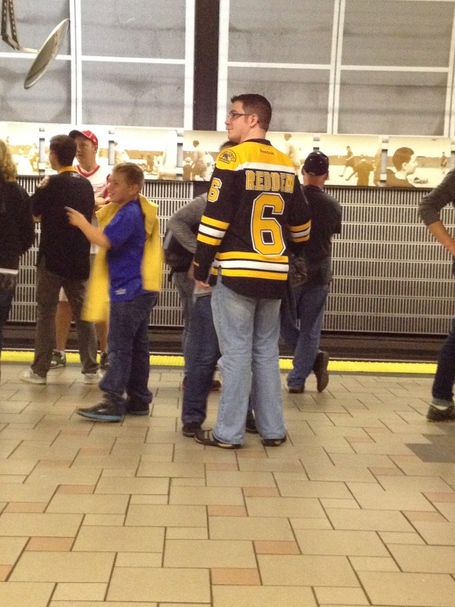 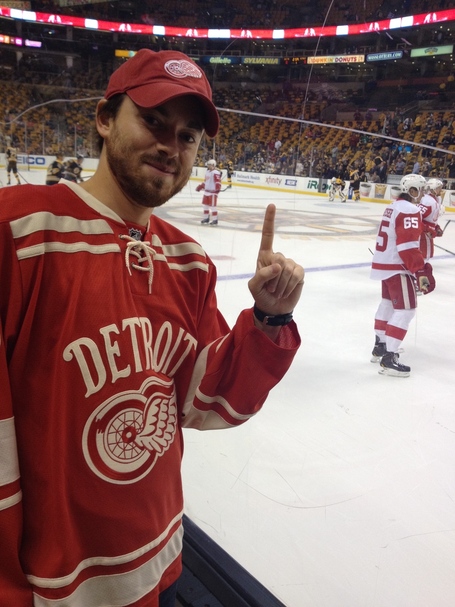