You fartlords sure had a lot of fun last week with this picture. 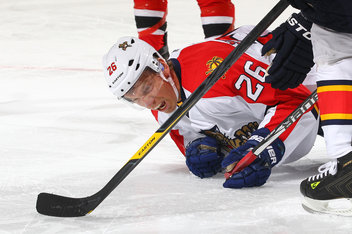 Unfortunately, as you know there can only be champions and losers and sheer probability puts you in the latter category. That is unless you go by the username AppState, in which case you're at least good at one thing this week.

And thus, after suffering a paper cut

Mikael Samuelson lost both of his legs and was on LTIR for yet another season.

Congrats, AppState, you've earned a target on your back for this week. Let's see you outdo yourself in this, the last week of the summer photo caption contest fun.

You see, because hockey stuff is ramping up, we're putting this one back in the shed until it's needed again... much like that chainsaw you had big plans for (and the cheerleader with the same problem).

Come up with as many funny, witty, creative captions for the header image as you can. You may use other pictures or .gifs, as well as genius pulled directly from your ass... er... head. Each rec a caption receives is a vote, so if you like a caption, rec it... rec it good. Whichever caption receives the most votes is the winner. Your prize, for winning such a prestigious contest, will be the praise (or envy) of your peers, as well as internet popularity that will last *forever. *Or, more likely, until the next caption contest winner steals your thunder and your fleeting internet fame vanishes quicker than someting, something, something...