Long a favorite in international circles, Finland's ice hockey team (both men's and women's) has been a strong contender for quite some time. Most recently, both genders have won bronze medals in 2010. Had Miikka Kiprusoff not wet the bed in the Vancouver semifinal round, there would probably have been at least a silver medal for the Finns that time around. However, that is all water under the bridge.

Finland is coming back this year with a very balanced roster. It might not have the snipers that Russia has, nor the depth that Sweden has, nor the overall astonishment that Canada gives off, but it does not possess the stupidity that was used to select the American roster. The Finns have as good of a chance as anyone to impress and medal at the 2014 games, especially with some wider ice. Let's take an in-depth look at the background of the team. 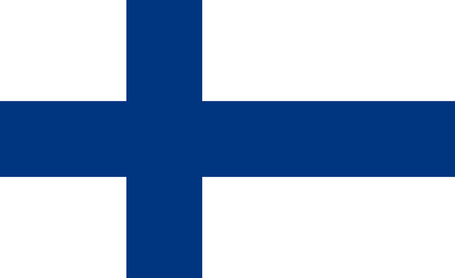 The flag of finland, called Suomen lippu, literally "Blue Cross Flag" dates from the beginning of the 20th century. The blue nordic cross over a white background represents Christianity. The current design (pictured above) was first used in Finland by Nyländska Jaktklubben, a yacht club founded in Helsinki in 1861. The flag has a proportion of 11:18 and was officially adopted in 1920.

Finland's IIHF logo features an emboldened version of the country's coat of arms (a lion), along with the country's name in its majority official language, Finnish. The logo is used as a jersey crest as well as the nickname for the country's ice hockey team, Leijonat, which is "lion" in Finnish. Apparently, global warming has sent lions up to the North Pole to kill all of the polar bears. Nature, everyone.

The biggest thing that jumps out (other than what will be mentioned below) is the age of Finland's most recognizable players. Kimmo Timonen, Teemu Selanne, and Sami Salo are all well beyond the age of 35 and are extremely close, if not already practically at retirement. Barring any miracles or ill-advised comebacks, this will be the final Olympic Games for each of the aforementioned players.

Saku Koivu is done with international competition for probably the remainder of his career, as he withdrew himself from consideration following a concussion this year. Pekka Rinne, who is likely done for the season in Nashville, was left off of the roster as well due to health reasons.

On the other hand, there are some highly underrated names in Mikko Koivu, Olli Jokinen, and Jussi Jokinen, combined with some impressive younger players at all levels, most notably Olli Määttä (age 19) and Aleksander Barkov (age 18), each of whom are having very respectable years in their first full seasons at the NHL level.

Fun fact: the Finnish team ironically boasts both the oldest and youngest players in the NHL in Selanne and Barkov, respectively.

I really don't even have to write about this.

Finland has two Vezina contenders and the most underrated goalie in the NHL to play the position in Sochi. I'll just tell you that at this point in time, all three of these goalies are top ten in the league in terms of wins, and the guy who wears black and gold happens to have five shutouts in forty games played. He's the league leader in this category, by the way, and he's likely to be Finland's starter. He's strong with two u's, two k's, and all Rask.

A team is built best when it is built from the goal out, and Finland won't have to worry about goaltending for the foreseeable future.

I have to question the speed of the blue line here. If there's any category that absolutely jumps out at me the most, it's the fact that two of the team's defensemen are basically at forty. Four years ago, they were four years younger (shout-out to 50 Tyson) and had better foot speed, but this year I can see Kimmo Timonen getting caught on a pinch quite often; he's just not as quick as he used to be. On bigger ice against some extremely competitive opponents, this could spell a lot of trouble.

At the same time, does a guy like Olli Maata translate what has been a stellar season in Pittsburgh back to the bigger ice, and more importantly does he retain his already-displayed patience with the puck? The blue line will be the litmus test for how Finland will ultimately finish.

As mentioned before, age is just a number, unless you're playing a professional sport. Mikko Koivu is now 30 and is coming off of ankle surgery, where he is scheduled to return just before the Olympic break for the Wild. That could be a huge problem, particularly if he's supposed to be centering the first or second line. Finland has a lot of raw talent and they possess a team that just won gold at the World Juniors, so help is on the way for Pyeongchang. However, the future is not now in Finland, and these Olympics will all but state what direction this country's Olympic program is heading in.

I think I speak for all of us when I say I wonder how Valtteri Filppula will perform at the games, considering how amazing he has been down in Tampa, much to Detroit's and Stephen Weiss's dismay.

Finland has the power to play with fire in these games, not only because they're the underdogs, but also due to the fact that they have a bunch of players who are all on their final tours of duty. Does one last chance spell success or failure for these older veterans?

The most Finland does is play spoiler. I think they place fourth and compete in a bronze medal game, though I don't think they're silver or gold potential unless one of the top teams falls flat (which has happened before, by the way). If all goes as planned, they finish high but don't medal. However, just remember that the games are played for a reason.