Members of the Masthead give their perspectives on a day for the ages.

We all know last week was special as a whole, but believe me when I say that last Wednesday capped off one of the most perfect weeks for Wings fans, save the atrocious weather and driving conditions. Now that it is all said and done, here are members of the masthead to recap their New Year's holiday experiences in and around Ann Arbor and Detroit:

Let me start by saying that it's an abjectly terrible idea to have a hockey game in single-digit weather with wind driving snow directly into your face as you try to enjoy yourself... that is unless you're there with 100,000 other people where the shared enjoyment easily overwhelms the individual misery.

The game itself could have been better. The conditions made the ice choppy and they screwed up the opportunity for skill to take over, but what took place on the ice was very entertaining to watch. I've long argued that for the majority of games, having a set winner would be preferable to letting the contest end in a tie; the Winter Classic was a special game and, as such, definitely fit into the minority of games that could and should have ended that way. Without the finality of a true winning goal, the experience of the game was what won the day. 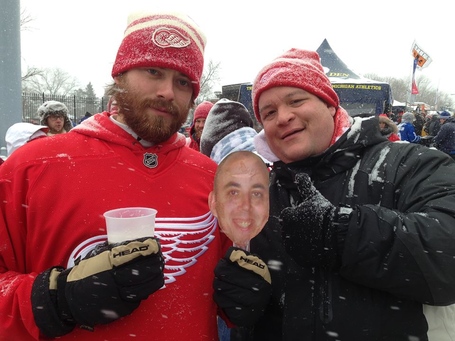 I was at Wrigley in 2009 and to me the biggest difference was how well the two fanbases seemed to play together in the Big House. I'm sure there were awful moments and some ugliness; you're going to get that with 105,000 people stuffed together, but what I saw late in a very tiring and miserable day was Wings fans and Leafs fans huddled together singing ‘Sweet Caroline' in unison like all the Whos in Whoville waking up on Christmas to the news that their Christmas had been stolen.

With a great group with whom to travel to and from the game, specifically @JennyQuarx, who helped set up the H2H3 gathering with tireless effort and the patience of a saint, the only improvement to the overall experience I could have asked for would have been a Red Wings' victory.

It was 13 or so degrees. The wind chill made it worse too. Everyone was soaked from the constant snowfall. None of that mattered though. It didn't matter if you were wearing blue or red. This was a celebration of hockey. This was a grand event. The largest and greatest hockey game in the world.

Easily the coolest sporting event I've ever attended. It's fitting that the game ended in a tie too. 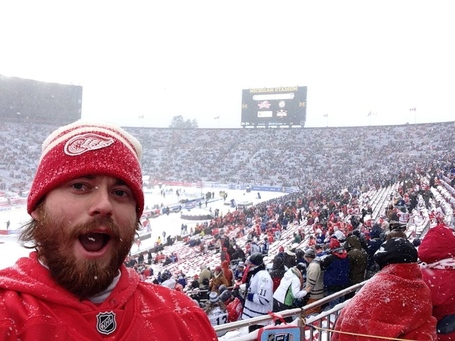 The Big House seemed like it was a 50/50 split of red and blue. Maybe a little more blue, than red, regardless, both fan bases brought it. You got chills from the chants (and not because the temperature was so cold).

It was back and forth all game long. And it was awesome every time.

There's no question though that the Winter Classic wouldn't have been what it was without the people there with you. We had an awesome group in our section. From the WIIM crew to @jennyquarx to @sullyosis to the cool dad and his young son sitting with our group, there were so many awesome Wings fans at the game. Props to the Leafs fans for being cool too.

The Winter Classic was everything you imagined it would be and more. Despite the 200+ words I've written, it really is hard to properly give the Winter Classic the true love it deserves. It was a freakin' hockey game in a snow globe for goodness sake! Every single picture you see out there is amazing, but the experience of being their live was even better.

This was an entirely different experience from the Big Chill three years ago. I'm an MSU grad, but I'd be lying if I said I've ever had a whole lot of interest in college hockey. I went for the sheer absurdity of it; getting tickets last minute for a hockey game in a 100,000+ seat venue on a 40 degree day. I didn't know who most of the players were and had a minimal sense of how my school was doing that season, but a then-world record crowd in attendance and an MSU - UM battle in any form was more than enough of a draw for me. It rained somewhat, it was windy and Michigan State was on the losing end of a 5-0 beat-down. Would have been cool to celebrate even one goal, but we still had fun.

This time around ... this was completely nuts. The atmosphere was excitably intense. I parked about ¾ of a mile away from the stadium at my Super Secret SpotTM, and the walk provided a slow buildup of the anticipatory crowd noise, starting with dull murmurs of small tailgate parties and ultimately crescendoing into a significant buzz as I approached Main Street. The different colored jerseys clashed together beautifully among the herds of fans circling the stadium. It was almost unbearably cold with the wind, everyone's clothes were already soaked from the constant snowfall, and yet every person you looked at seemed like this was the happiest day of his or her life.

When I walked through the tunnel to Section 7 on the way to my seat, I was astounded by the view. This wasn't the Big Chill. Snow had already covered everything, so instead of a makeshift ice rink plopped in the middle of a football field on a sunny fall day, it looked like a Michael Bay production of a pond hockey fantasy world (without any plot holes). The scene was immaculate, and it only got better when the game itself started, as the red and blue uniforms melded together against the snowy backdrop perfectly. By game's end, my feet were so frozen that they hurt, but I'd do it again tomorrow if I could. Just to be there and see that game was plenty worth it, but getting to experience it with a few dozen friends made it even better. I can't thank Jen MacRostie and everyone else involved enough for putting that all together. What an incredible day.

So, you all know a lot about me. You know I grew up a Devils fan, you know I cover Michigan College Hockey, you know I attend the University of Michigan and live in Ann Arbor, and you know I'm from New York. Yesterday all but solidified that the Devils could never do what the Wings did for me over the past two weeks. I could never have experienced something of this magnitude had I not discovered my love for writing and covering Red Wings hockey.

I made the hard decision during the month of October that I was going to cut my winter break short, and I was going to spend an extra week away from my family as well as my first New Year's outside of New York. I decided that I was not going to miss the only opportunity to see one of the world's largest hockey games at my school featuring the team that I write for.

Convincing J.J. to spot the WIIM credential to me was probably the defining moment of my tenure here. Many of you know how much of an adaptation it is for me to write on WIIM, and many of you are aware that I've had both my shining moments and my time in the doldrums on these very pages over the last four to five months. Working with SB Nation NHL, Travis Hughes (@TravisSBN), Jeff Veillette (@Jeffler), as well as everyone on our masthead was incredible. I enjoyed representing SB Nation and WIIM professionally for the last two weeks and I truly discovered the scope of how big our network really is. A lot of people are familiar with the SB Nation brand, and that goes all the way up to Doc Emrick at NBC and employees of the Red Wings themselves. 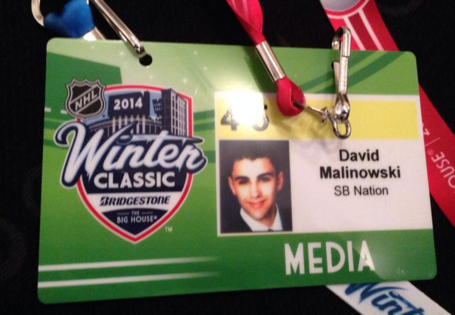 Spending the New Year in and around the Big House was spectacular. I was able to socialize with Michigan Athletics staffers that I hadn't seen in a while; I was able to walk around the stadium and provide up-to-the-minute information to hundreds and thousands of people around the continent.

I was in attendance at one of the world's largest ever hockey games, and I'm glad I got to both meet and share it with both J.J. and Jeff (Tyler had arrived after I went into the press box). I got to work with old colleagues as well as new faces and friends, from Sean Gentille and Dave Lozo to Jeff Veillette and Monica McAlister. I was able to shake hands and converse with great writers and personalities in Stephen Whyno, Michael Caples, Pierre LeBrun, Elliotte Friedman, Mike "Doc" Emrick, Mike Milbury, Pierre McGuire, Ansar Khan, and too many more to mention. It's the annual family gathering for us writers/reporters, the other being draft day of course.

Covering the game from the press box high and far from the rink was a challenge, but the warmth was worth it, as was the information. Getting SB Nation upstairs was a bit of a struggle, but we got it done.

One interesting aspect of the day was the Liles-Gleason trade. After a lot of pre-game confusion and following months of speculation, game warm-ups saw John-Michael Liles pulled off of the ice and into the dressing room. It was later announced that Liles was traded to Carolina for Tim Gleason and a defensive prospect. Watching it happen live and seeing the press box's reaction to it was incredible. Dave Nonis surfaced from his box only to be met with incredible demand by the press.

Post game conferences, albeit a little sloppy, were another animal. It was an honor (and flat out cool) to be able to ask Mike Babcock, Jimmy Howard, and USA Hockey questions and use that material to write. I do it a lot with Michigan Hockey, sure, but doing it at this level was a completely different ball game. The funny thing is, none of this would have been possible without the lockout postponing the Winter Classic at The Big House. As selfish as it sounds, I thank the lockout for pushing back this game to my Freshman year of college.

Thanks again to everyone who gave me the opportunity, and thanks to everyone who followed my coverage closely. I covered my first ever NHL game on New Year's Day on the biggest stage possible. I don't think anything will ever top that.