I like Tomas Tatar, so I decided to see if he's making the team as good as I think he is.

The Olympic rosters have been set, and once again the Red Wings are going to be well represented when the best players compete for their countries.

While names like Zetterberg, Franzen, Kronwall and Datsyuk weren't surprises, a few new guys are going to get an opportunity to play for their country in Sochi. Jimmy Howard, Jonathan Ericsson, Jonas Gustavsson, Tomas Jurco and Tomas Tatar will all get to experience the thrill of putting on their national sweaters and trying to win the ultimate prize: Olympic gold.

Of the newbies, perhaps no player deserves it more than Tatar. The exciting rookie finally earned his spot in the Red Wings' lineup, and he has taken full advantage of it by continually getting better and developing into an offensive star. His play this year earned him a spot on the Slovakian squad, a team that typically splits pretty evenly between NHL and non-NHL players, but nonetheless is considered a wildcard that could surprise some teams in Sochi.

But how good has Tatar really been this year? It's well known among Red Wing fans that the team loves to take their time with their prospects, choosing to over-develop them in the minors before giving them an NHL spot. In fact, one could argue that Tatar is only in the lineup because of injuries to a few veterans, and there's a real possibility that had the Wings remained healthy, Tatar is still in Grand Rapids (which is not right because he was out of AHL options when the season started because I don't always research stuff so good).

Regardless, Tatar is a Wing and will remain one, his AHL career pretty much over (and ending it as a Calder Cup champion and playoffs MVP is a great way to go). When he arrived, many hoped that he would get time up on the top lines with Pavel Datsyuk and Henrik Zetterberg, but instead Mike Babcock has consistently had him playing on what would be considered the third line. I'm sure that the thinking was that Tatar would learn the game the same way previous Wing rookies had: by playing sheltered minutes and not being asked to be a key contributor while learning the system and how to play in the NHL.

Yet one could argue that Tatar has surpassed what was likely expected of him from the coaching staff. While always regarded as a strong offensive player, it's not often that a player transitions from the AHL to the NHL seamlessly, regardless of talent level or place in the lineup. When they do succeed, typically it's in a traditional offensive role playing with top talent.

However, Tatar is not regularly playing with top-end talent, at least not when it's 5-on-5. His top two linemates in terms of TOI are Joakim Andersson and Drew Miller, with Justin Abdelkader a little behind Miller in terms of shared ice time. None of those players are counted on to provide offense as their primary role, yet Tatar's EV stats indicate that when he's on the ice, he's driving possession:

Those are the kind of possession stats I'll take for a third-line winger who will be playing in the 63rd game of his career on Thursday night. Yes, he's not being used in a "checking" role that would traditionally be required of a third-line player, but he's with two defensively-responsible forwards most of the time and plays on a team where the two best forwards offensively are also among the league's best defensively. And while he's playing easier minutes competition-wise compared to Datsyuk and Zetterberg, he's not far off when it comes to the opposition faced by players like Daniel Alfredsson, Stephen Weiss and Johan Franzen who are second-line players, and still contributing positively to the team's success offensively. Combine this with his 48-point pace (again, taking into consideration who he plays with and amount of time he spends on the ice), and you've got the makings of a very good third-line player who can provide depth offense with the promise of even higher offensive output. 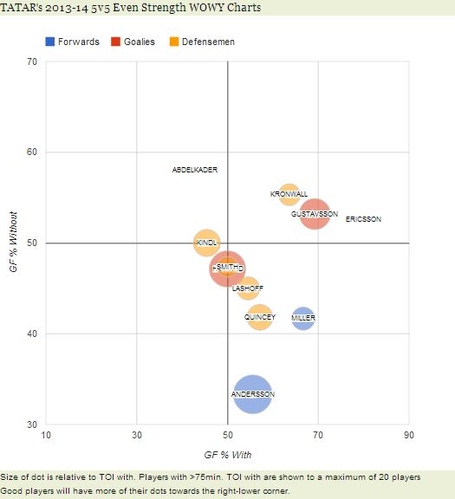 Once again, we see that Tatar is having a positive effect on his teammates offensively at 5-on-5. Even Kyle Quincey. I mean, come on; anyone that can make Quincey look better has got to be performing at a high level, am I right? (love you Kyle!)

Not all of this is to say that Tatar is perfect. He missed that shootout chance against the Leafs that could have potentially won them the Winter Classic (for which I will be eternally bitter about). And he's definitely going to have to work on his overall defense if he's going to rise to the top lines on the Red Wings. But I think that, 62 games into his career, it's clear that the Red Wings have discovered another very good player who is only going to develop into a strong contributor to the team's future success.

tl:dr; Tomas Tatar is good at hockey because he can do stuff like this: