"The best offense is a good defense" the people say, not really understanding how scoreboards work, apparently. Oh well, we already covered the Wings' offense. Let's take a step back and circle the wagons for a look at the D.

If you throw away the empty net goals for each team, Detroit ranked 17th in the NHL for goals allowed with 214, nestling them between Phoenix and Carolina. The 2.7 goals allowed per game is the highest figure for Detroit since they surrendered 2.89 against during the 2010-11 season and is the only time since the last trip to the Cup Final that the Wings have had a higher goals against per game rating than goals for. Shots-wise, the Wings were able to keep a positive differential, but the 29.3 shots against per game is higher than usual.

Again, just like on offense, injuries helped add to the problem. While the Wings' blueline corps was able to stay relatively healthy, defense isn't just about the defensemen. Missing high quality centers really hurt Detroit last season. To add to the problem, Jimmy Howard also had his worst season as a starter in four years.

Unless kids from Grand Rapids steal some jobs or Holland pulls a blockbuster, there will be no changes for the Wings in goal or on defense. Healthier Selke-caliber centers should help, but they also look to be without Daniel Alfredsson this season and he played defense pretty well. Other than that, we may see minor personnel changes, but nothing easily identifiable as "key" right now.

Without empty-netters or penalty shots, Detroit let opponents get 159 out of 213 total goals against at even strength (74.65% - 15th in the league). Only 3% of goals against the Wings came shorthanded, which was quite good for them at least. Meanwhile, 23% of the goals against the team came with the opposition on the power play. 12 teams had a higher number than that. Overall, the biggest thing which stood out here was that the Wings were average at preventing shots against, but got below-average goaltending. While shot suppression should be a key focus, simply getting better performances out of Jimmy Howard should help them rein in some of those goals against.

In the offensive preview, we had goal location heat maps for the Wings from Sportingcharts.com. Unfortunately, they don't have goals-against maps, so we're going to have to rely solely on War-on-Ice.com for our data here. We'll start with the shooting rate chart by location. 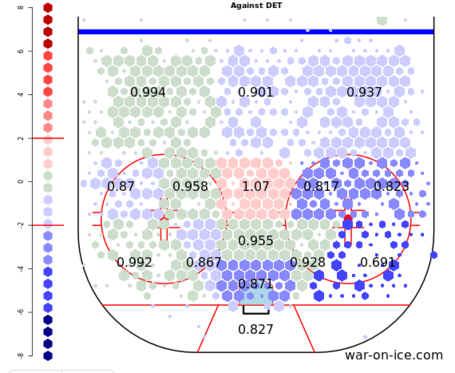 Ok, this one is pretty promising, actually. Showing only even-strength shots, the Wings seemed to do better than average at keeping shots out of the "Home Plate" scoring area (except in the high slot, which is a pretty terrible place to allow more shots than average from). For the talk about how the Wings need more "grit" in front of their net to clear guys out, they're allowing fewer shots in that area than many teams.

We talked a lot about handedness in the offensive preview, but you can see it at play here as well. The side of the ice where a left-shooting player naturally has his stick aimed to the middle of the ice saw fewer shots generated. This is partially by design of the Wings' system, but it's also partially by design of their opponents. It's easier to pressure and get shots off on the side where you're facing the left-shooting left wing who has a left-shooting D-man behind him and they either have to go to the backhand to get their sticks in the lane or they have to give up more room along the boards.

Now that we've seen by rate, let's take a look at the opponents' success rate on shots relative to the league at even strength. 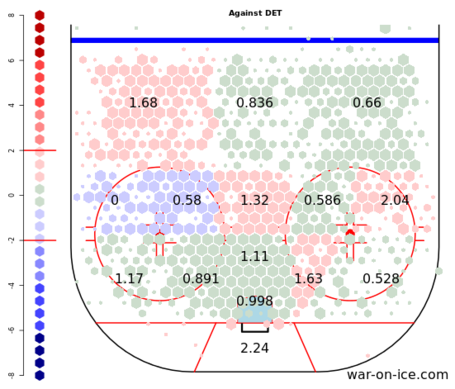 Here's where we're looking at the impact of getting below-average goaltending, as there's a lot of red on this chart and not nearly enough blue. It's interesting that opponents would shoot so much worse on the interior top-circle of the scoring area where the Wings' defense would be allowing more a few more looks, but backing those shots up above the circles shows that it didn't slow down the opposition too much, all things considered.

Ultimately, with a (hopefully) healthier team, I expect that shot rates will go down a little bit. I also expect a bounce-back year from Jimmy Howard, dropping shot success rates as well. The difference could be enormous for the Wings this season compared to last.