After just four days, the Group Play round of the Sochi Olympics has come and gone. All the men's teams will be off tomorrow while the women play their two semifinal games, which are expected to lead into a USA/Canada Gold Medal matchup later in the week. Then on Tuesday, the elimination games for the men begin. Here's how the bracket looks (from Wikipedia): 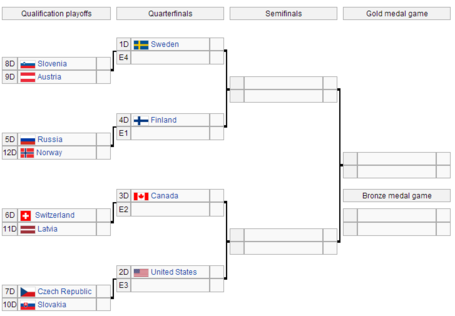 So it looks like if that Gold Medal rematch from 2010 is going to happen, it'll be in the semifinals. Meanwhile, the home team finds themselves in the Qualification Round having to play an extra game before presumably having to go through Finland, Sweden, and then one of the North American powerhouses if they're to win gold.

So how did we get here?

The Group Play stage played out fairly similarly to how it was expected to, with Group A playing as the most-level of the fields; Group B coming down to a battle between Canada and Finland; and Group C going easily to Sweden with a closer battle for second place. That doesn't mean there weren't surprises in this round.

Biggest Surprises of the Round

If we're looking for upsets in the Qualification Round, then the Czech Republic/Slovakia game is probably the best chance, as I think the Slovakian team is better than the Czech squad, but they've played like garbage so far. Slovenia/Austria is the closest meetup on the brackets and the Austrians could surprise, but I don't know if I'd expect Slovenia to play down to that level.

Once we get to the quarters, assuming no crazy upsets on Tuesday, Russia/Finland should be the most hard-fought game. The US will have to go up against a very talented team in either the Czech Republic or Slovakia and the Swiss team, expected to earn their way to a matchup against Canada, can be very frustrating to play against.