It’s pretty crazy to think just how excited we get about a little rubber disk sliding across a frozen sheet of ice, through the blue paint, and across a painted red line. We fans go wild and jump, yell, celebrate, chest bump, throw our pants, and share celebratory gif’s, or whatever else you do to celebrate your team putting the biscuit in the basket. Last summer, the NHL said they wanted to increase scoring throughout the league (clearly the NHL voters aren’t goalies) and in an attempt to accomplish their goal, one of the things they did was reduce the size of the goal nets. 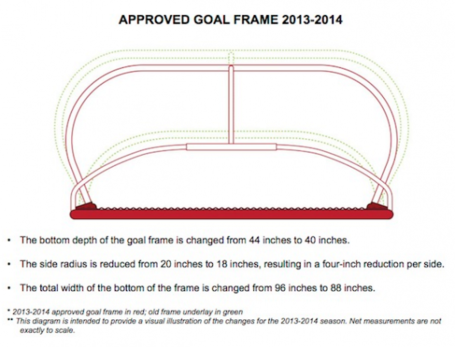 Eric Tulsky of Broad Street Hockey took an in depth look at the impact of the shallower nets on wrap-around shots and goals across the NHL, while Evan Sporer provided video analysis of some wrap-around goals this season and broke down Tomas Tatar's wrap-around goal against the Bruins.

As Eric found out, league-wide wrap around attempts this season didn't increase by much, going from an average of .96 per game to an average of 1 per game, though a slightly higher percent of those attempts are resulting in goals (5.8% this season compared to 3.5% last season). He also discovered that the Red Wings had the 4th lowest wrap-around attempts per game last year at .31 per game, but this year at the time of his article, we were averaging .64 per game, which was the 7th most in the league. We're now averaging .466 wrap-around attempts per game.

Looking at the breakdown of wrap-around shots and goals for the Wings since the 2009-2010 season, the Wings are making more wrap-around attempts per game this season and already have 4 wrap-around goals.

It's hard to say definitively, based on the available data whether or not our increase in wrap around attempts and goals is because of the chances in net size (and goalie equipment size as well) but it does seem plausible. I would have expected that players would try to take advantage of the goalies adjusting to the net and equipment changes right away int he season, however the Wings had 4 wrap-around attempts and 2 wrap-around goals in the first 20 games, then had 15 attempts and 2 more goals in the next 20 games.

The first 2 wrap-around goals came from Todd Bertuzzi and both were on the power play and they are almost identical in position and execution. Bertuzzi gets the puck behind the net, wraps-around to the goalie's left and puts the puck in between their pads. These look like goals of opportunity rather than planned plays, but I do wonder if it would be possible or useful to practice plays that utilize the wrap-around technique while on the power play. I don't think it would be a high scoring percentage play, but I wonder if it would be worth looking into.

The other two wrap-around goals the Wings have this season came at even strength, one from Tomas Tatar and the other from Joakim Andersson. Neither of these shots should have gone in, but because of Rask not moving fast enough laterally, and then Reimer not covering the posts with his pads like he's supposed to and also not having his stick in the correct position, we scored 2 goals.

Tomas Tatar Even Strength Wrap Around Goal on November 27, 2013

Joakim Andersson Even Strength Wrap Around Goal on December 21, 2013

What does it mean for the Wings?

The shallower nets give the forwards more time and space behind the net to skate, make plays, and get from one side of the net to the other quicker. That, combined with the nets also being narrower, allows the forwards to wrap-around the net faster. As a goalie, wrap-around shots can be challenging because you have to be aware of where the puck is, who has it, and what direction they're going with it. Because of the new regulations for goalie pad and stick sizing, the goalie were also having to change their position and adjust to their equipment changes as well as the change in net size.

As the goalies have adjusted to the changes, they're better able to defend against wrap-around attempts. I'd still like to see the Wings continue to take wrap-around attempts, even though they haven't resulted in many goals. The Bertuzzi Power play goals were a result of him recognizing an opportunity and having the hands and skill to capitalize. Maybe players could benefit from training and practice in recognizing those opportunities and acting on them quickly? I also wonder if, since there are more wrap-around attempts, if we can't utilize them better, even if the initial shot doesn't go in. For example, if Justin Abdelkader makes a wrap-around attempt that is either blocked or only goes through the crease, can his teammates be prepared to get the second chance to put the puck in?

Ultimately I have more questions than answers after digging into the data, but I think it's an area that's worth exploring more to see if the team can use it to their advantage.