Looking Ahead: The Push For The Playoffs

The Wings just finished a great week. Can they keep the momentum going and actually make the playoffs?

Share All sharing options for: Looking Ahead: The Push For The Playoffs

Think back to a week ago: if you had to answer with a number, what would you have said the Red Wings' chances of making the playoffs were?

If you answered "50%", you and I would have agreed. This knowledge would have led to a sad, knowing smile followed by an adult beverage.

However, the Wings had a great week, going 3-0-1 and moving into a tie with Toronto for the first Eastern Wild Card playoff spot. The strong performance of the team means that the remaining 11 games take on even more significance, especially since the next few games will see the Wings play 2 of the teams they are fighting with for one of the final spots.

What needs to happen for the Wings to do the improbable and make the playoffs for the 23rd straight season? Before we get into that, let's take a look at where things currently stand (that's a pun, get it? "Stand"?): 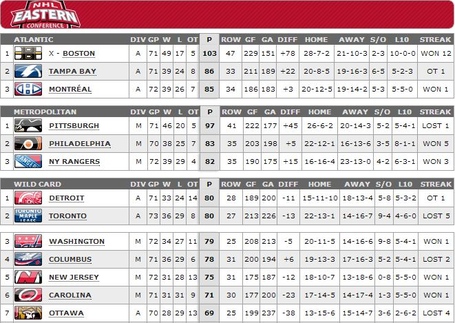 Why did I include Ottawa, you ask? I needed a laugh after the OT loss to Minnesota.

Ok, first of all, the important thing here is that the Wings do have a hold of one of the playoffs spots, and their 2 games in hand over Toronto and 1 over Washington mean that they can increase their lead over those two teams no matter what the Caps or Leafs do in their games. The Blue Jackets? Well that's a whole different story. The Wings' next game is against Columbus on Tuesday, and that will be a pivotal game for the Wings as they can jump 4 points ahead of the BJ's in the standings.

As it stands right now, the 2nd Wild Card team is tracking to earn anywhere from 90-92 points. The Leafs, who currently occupy that spot, would earn 90 points on their current pace. The Capitals are also on pace for 90 points, while the BJ's are running at a 91 point pace. The Wings? After looking at a finish of around 89 points with 15 games left, their recent hot streak has bumped that up to 92 points.

According to sportsclubstats.com, which uses a lot of fancy math that determine the probability of a team making the playoffs, 93 points looks to be the current "magic number" that will, in all likelihood, earn a playoff berth. Right now, should the Wings get to 93 points in any fashion, their chances of making the playoffs jumps to, at worst, 95.3%. Compare that with an at-best chance of 89.7% with 92 points.

13 points in 11 games? Seems pretty simple, eh? Theoretically, the Wings could go 6-4-1, get to 93 points, and likely face either Boston or Pittsburgh in the first round. The Wings have hovered around .500 all season, so this record is not out of the question. However, they do have to actually play the games, and as we've seen this year, they're not about to make this easy on themselves.

What does their schedule look like? Surprisingly, it's not the most difficult, but it's not a cakewalk either. The Wings definitely have opportunities to earn points, but there's some tough teams on the schedule as well.

A few things that stand out to me: Columbus' schedule is tough. Pens, the red-hot Flyers, Avs, Blackhawks, and then the Coyotes and Stars, both of whom are in a fight for the last spot in the West. Washington's schedule isn't much better, with games against the Kings and Bruins followed by the Blues and Blackhawks in 2 of their last 4 games. The Leafs' are in total free fall and they get to play, in order, the Blues and Flyers before a critical Saturday night matchup against the Wings.

Detroit's schedule isn't awful, but it's not easy. Obviously the key games are Tuesday against Columbus and Saturday against the Leafs. If there are 4-5 potential regulation losses available to the Wings over the last 11 games, they really can't afford to lose to either the BJs or Leafs. If 6-4-1 is the magic record, then realistically we could see the following:

The problem with trying to look ahead is that you just never know what's going to happen. I've got the Penguins as a potential regulation loss, and yet we just watched the Wings earn an improbable win against the Pens this week. If there are 2 games that scare me, it's the 2 Sabres games. Both come on the first night of back-to-backs where the Wings take on a tough opponent the following night. The Wings have had a tendency to play down to their opponents this year, and the Sabres will be playing for pride and little else by the time the puck is dropped.

What does it all mean? I have no idea. I just know it's been fun watching the Wings this week, and with the stakes so high, the next 3 weeks promise to be just as exciting.