Did you really expect someone else to write this? Really?

I wasn't supposed to post today, but let's just say that a couple of people had other obligations while others had a bit too much fun at Nick Night.

Most of you probably saw this from Jeff's Twitter feed after Tuesday night's game in New Jersey:

Lets not forget that Brendan Smith scored tonight & I witnessed it live. Plus, I exposed @dmmm14 as a true Devils fan pic.twitter.com/13vgatBLsc

However, what he forgot to tell you was that he is a master of photochopping. You see? I had a Red Wings T-shirt underneath all along. A 2002 Stanley Cup Championship shirt nonetheless.

Let's have a closer look: 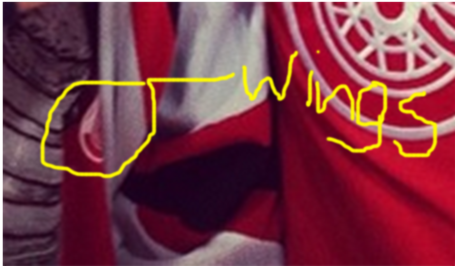 And to think Jeff went as far as to photoshopping my hand and t-shirt out of the image.

In all seriousness, we had two WIIM reunions this week altogether and I'm thankful to be a part of this community, even if it means we give each other crap once in a while.

Regardless, there is a game tonight in Detroit and it is between the Wings and Devils.

As a person who wasn't buzzed on Tuesday night in Newark, I paid attention to the game, and the Devils got away with playing a pretty garbage game and the Wings were just over a half a minute from getting a much needed point.

While the Devils spent deadline day acquiring Tuomo Ruutu and the subsequent two days getting their Ilya Kovalchuk penalty reduced, they also spent last night in Detroit, which means they're rested and automatically at an advantage.

What does this mean? I don't know. It'll be a boring game in all likelihood. Then something strange will happen to make the game interesting in the final half of the third period.

Keep Calm and Wing it on.