The Push Continues: Looking Ahead

Share All sharing options for: The Push Continues: Looking Ahead

If there's going to be a word to describe the 2013-14 Red Wings once this season is over, it's probably going to be "roller-coasterific".

I realize that's not a word, but it's the best I can do to accurately put into a single word what this season has felt like. The amount of ups and downs the Wings have gone through this season is unprecedented given the relatively stable history of this organization over the last 20 years, and with the final 2 weeks of the regular season upon us, the excitement is only going to increase.

The Red Wings had an interesting week last week, going 2-2-0 including what could have been a devastating loss to the Blue Jackets, and yet the Wings sit in a better position to make the playoffs now than they did a week ago. A win against the Maple Leafs followed by a strong performance against the Lightning left the Wings with 84 points, good for a 2 point lead over the Jackets (with Columbus holding a game in hand and still owning the tiebreaker) and 3 point lead over the Capitals. Here's how things stand heading into action tonight: 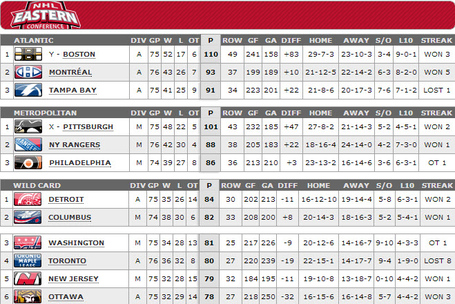 If last week was a sprint, this week could be thought of as a middle-distance race. The Wings will enjoy 2 off days before taking on the red-hot Bruins tomorrow night, followed by back-to-back games against the Sabres and Canadiens. At this point it's safe to say that catching Tampa and/or Montreal is pretty much not going to happen, so the focus is going to be on earning one of the final 2 wild card spots and setting up a first round meeting with either the Bruins or Penguins.

According to sportsclubstats, 93 is still the magic number to virtually guarantee a playoff spot, which means the Wings can earn 9 points in their last 7 games and theoretically be ok. However, based on the way the teams behind them are playing, all of a sudden 92 points gives you at worst a 96.6% chance of making the playoffs. That means the Wings could go 4-3 and probably make it in.

Of course, that means they'd be relying on other teams for some assistance. Who do the teams behind them play this week? Glad you asked:

The two teams I'm most concerned about are the Blue Jackets and Capitals, because both have the talent to overtake the Wings, especially since the Jackets lead in the ROW tiebreaker. However, that's a brutal schedule this week for the BJs, as they take on 2 of the best teams in the West with a game against the hot Flyers in between. The Capitals have a decent schedule this week and could easily go 2-1, as could the Leafs, but one of the Caps or Devils will lose ground since they play each other.

At the end of the day, a 2-1 week for the Wings sets them up nicely for the final week of the season. If they can somehow get a victory against the Bruins (and possibly getting Pavel Datsyuk back for that game makes that a little more likely) and then beat the Sabres like they're supposed to, they could put some distance between them and the pack. If not, then we get to tear out what little hair we have in the final week and see if this team can do what was once thought improbable.