Playoff Preview: Wings vs Bruins By The Numbers.

Comparing the Wings and Bruins By Their Season Stats.

Share All sharing options for: Playoff Preview: Wings vs Bruins By The Numbers.

Hockey games aren't won on paper, but often times we can get a good idea of what to expect based on teams season long stats. In the next installment of our ongoing playoff preview series, we're going to take break down the team stats and see how the Red Wings and Bruins compare to each other on paper.

The following content is rated X for extremely one-sided. Please remove all sharp objects before reading, and it's recommended that you have a few beverages of your choice prior to starting.

Let's take a look at the Wings and Bruins season stats and how they ranked in the league....

Those numbers aren't surprising, and they sure aren't flattering to the Wings. The Wings have been a middle of the pack team most of the season, while the Bruins have been near the top. The special teams match-up is.... not favorable for the Wings either. The good news is that the Wings have got into the playoffs while decimated by injuries with key players missing significant time. With injured players starting to come back healthy, and Zetterberg possibly back for the 1st round we should expect the Wings performance to only improve.

Howard vs Rask doesn't look like a close match-up on paper, but Jimmy was on his C game early in the season but he seems to be finding his A game lately, and we're going to need it. Rask has also had the advantage when it comes to the team playing in front of him, Jimmy hasn't had that kind of luxury.

Fenwick% in close situations is a useful metric because it takes into consideration only game situations where the score is tied in any period, or within one goal in the first or second periods; thereby seeking to eliminate scoring effects. The formula for Fenwick is (Shots on goal for + missed shots for) - (shots on goal against + missed shots against). This possession metric its similar to corsi, except that blocked shots are not taken into consideration.

Here's how the teams compare. The full NHL ranking can be found here.

As you can clearly see, Boston has what I would say is quite possibly significantly better possession in tight situations. The Wings haven't been good with one (two, or three) goal leads and we all have the diamonds to prove it. Boston on the other hand has the 4th best possession raking in the NHL in close games. Below are rolling 10 game graphs courtesy of Extra Skater. 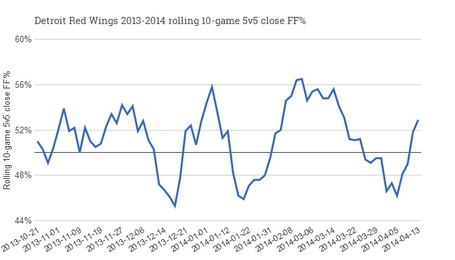 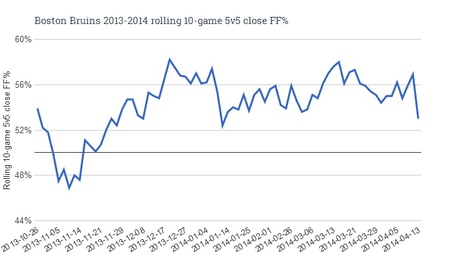 The first thing that jumps out is how inconsistent the Wings were this season, their chart looks like scary roller coaster track, while the Bruins were not only more consistent, but consistently better.

In the head-to-head series this season, there was only 1 of the 4 games where Detroit had had a better Fen% Close, and it was the game we won 6-1.

Is Fenwick% Close a good indicator of overall performance? If you compare the top 16 teams in Fen% Close vs the 16 teams in the playoffs, 12 of the playoff teams are also in the top 15 of Fen% Close. Full Comparison Here.

Woof! The Wings have a better chance of winning if they're trailing after the 1st period than they do when they're leading after the 2nd. Woof. It doesn't matter if Boston scores first, or if they lead or trail, they win a lot of games. I recommend not letting them score any goals at all. That's feasible, right? Hey Jimmah, I've got a request for you!

This is a stat I think seems to be often overlooked, but is very important. Eleven of the top teams in points contributed from defensemen are also in the playoffs. Point contributions from the back end can make a huge difference for a team. Not only in the obvious "scoring more goals"' kind of way, but it also indicated that the defense are typically doing a better job of moving the puck and getting it to the forwards. A full ranking of defense points can be viewed here.

Niklas Kronwall led the Wings defense in total points and had more points than Chara who led the Bruins, however Chara contributed just over double the goals. There's also a significant drop off in defense production below Kronwall, DeKeyser having half as many goals and points, while both Chara and Krug contributed 40 points each for the Bruins. Since the Bruins scored more total goals than the Wings, you can see below what percentage of the team totals came from defensemen. The total percentage of points is very close, however the Bruins defensemen contributed a higher percentage of goals.

What does it mean?

Basically, the Wings would have little chance to beat the Bruins if you only looked at the stats. It's a good thing the Wings like defying the odds.