Patrice Bergeron vs. Pavel Datsyuk and Why Are We Arguing over This?

We know how good these two players are, but are they really that different?

Share All sharing options for: Patrice Bergeron vs. Pavel Datsyuk and Why Are We Arguing over This?

Before the series began, there was much debate regarding two very well-rounded players playing against each other in the opening round of this year's Stanley Cup Playoffs.

What we are talking about is the fact that there are literally what seem like a million people from Boston talking about Patrice Bergeron and how he's "a thousand times better than Pavel Datsyuk," with a million more from Detroit voicing the opposite. Words were swirling to the point where letters were stripped from the page and tangled in a tornado of hyperbole.

Pavel Datsyuk burned Patrice Bergeron and Zdeno Chara with a one-in-a-million toe drag followed by a cross to the other wing and a shot that utilized two Bruins and Justin Abdelkader as a screen before serving as the lone tally of game one. Tuukka Rask admitted in post game interviews that he never saw the perfectly placed shot.

Watching and participating in the debate, I decided that this was going to be one of the posts to get me off of my WIIM vacation, because I seriously wondered how much in-depth analysis would solve this debate.

If we were to take Pavel Datsyuk and Patrice Bergeron, strip them of all of their talent, and compare them vis-à-vis using everyone's favorite advanced statistics, what we see is not all that surprising considering the rhetoric heading back and forth.

When looking at possession numbers, sample sizes are pretty important, that's a given. While we can look at a player's total time on ice and games played, based on this year alone we're dealing with a player who didn't break fifty games and a guy coming off of a punctured lung in the 2013 playoffs.

Rather than talking about total time on ice (games played, for instance), we'll measure a player's possession performance by his average time on ice over sixty minutes. Here, Pavel Datsyuk comes in at 19.8 TOI/60 whereas Patrice Bergeron is a full two minutes lower on average with 17.8 TOI/60 in the 2013-14 regular season.

Pavel Datsyuk scored on 9.6 percent of his shots this season, Patrice Bergeron on 9.0 percent. Next. 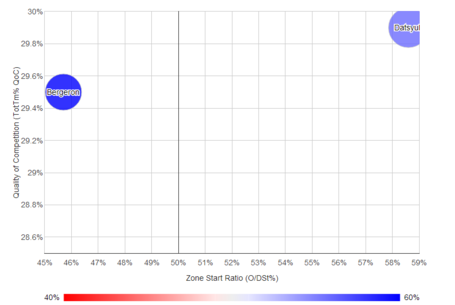 We can see here that in terms of QoC, Pavel Datsyuk usually faces higher competition. Pavel Datsyuk is always on the first line, Bergeron is his team's second line center, so there's that issue resolved.

Pavel Datsyuk has a much higher zone start ratio than Patrice Bergeron, and he starts in the opposing zone much more frequently than Bergeron, and both face on average very high quality competition, though this chart does reveal something interesting. When Pavel Datsyuk was deployed this year, he was largely used as a "two-way" player, one that plays in all situations as illustrated by the fact that he's in the top right of this chart, whereas Bergeron is more in the "shut-down" portion of this chart. That's pretty amazing considering the seasons that both of these players had circumstantially.

If you want a better idea of how these two players are utilized on their teams, take a look at the team QoC charts below*: 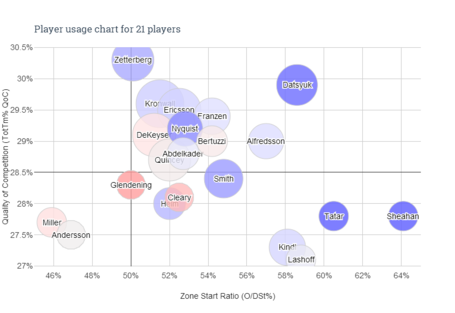 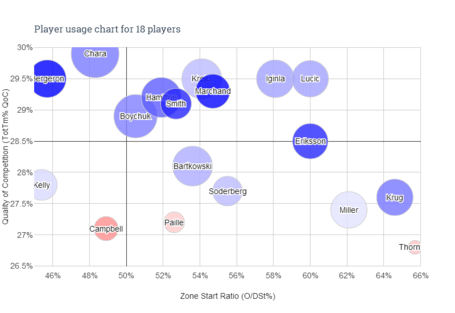 *Charts showing a minimum of 41 games played for both teams.

In terms of relative Corsi, where a player's possession is measured in relation to one's quality of competition, Bergeron has the edge with a .907 CFrelQoC to Datsyuk's .744; Bergeron holds his own quite nicely under the pressure of higher competition, though this is all subjective to how Claude Julien deploys his lines.

Are you insinuating that Patrice Bergeron is actually better than Pavel Datsyuk?

This season? Absolutely. It's the reason why he's the leading candidate for the Selke trophy while Datsyuk isn't in the conversation. Take away the fact that Datsyuk has been playing most of the year with a nagging knee injury that he carried through the Olympics.

However, if we're talking about the entirety of a player's career, I don't think any educated hockey fan nor analyst will say that Patrice Bergeron is definitively better than Datsyuk.

For one thing, Datsyuk's skill level is absolutely through the roof, and he has these random outbursts of brilliance that stun everybody in hockey circles. Friday's goal against Tuukka Rask is but one example of this. Then there's the Datsyukian deke:

By contrast, here's Bergeron's "best" deke on the internet, and pay attention to who is in goal:

We're not going to be childish and cite how many more highlight videos Pavel Datsyuk has than Bergeron's (just search for yourself), but we will talk about how much the NHL and NHL players love him, from the four consecutive Lady Bings (2006-09) to the player polls as one of the league's nicest and toughest-to-play-against players.

What we're basically arguing about is the equivalent of trying to decide which way you would like your leg broken. You never want to break a leg, no matter how it would happen.

Patrice Bergeron scored 30 goals this year and tacked on 32 assists to go along with them through 80 games. Patrice Bergeron is a warrior and one heck of a player, but Pavel Datsyuk has been around a hell of a lot longer. There's no reason to abjectly shame a fanbase because it is proud of its player, but it's Pavel's moments of brilliance that really make him a standout player.

Pavel Datsyuk and Patrice Bergeron are the same type of player, and I'm tired of facing the wrath of both the Red Wings fanbase and the Bruins fanbase forcing me to pick a side as to which player I think is better. Let's just enjoy both of them facing off against one another while this series is going on.

Just to rub Friday's win in a little bit, however, let's ask a few Twitter characters what they think of Pavel Datsyuk:

Pavel Datsyuk is of course fluent in Danglish.

Mr. @Datsyuk13 you are filthy. That's all

In conclusion, every time someone comes up to me and tells me A is better than B, I will respond with this: