Just for fun, I highlighted the channels I'm going to be watching those games on. I'm a glutton for punishment, so the Fox Sports Ohio crew fits that bill. On the other side, not only will the NESN feed likely be the only one I get in hi-def on DirecTV Center Ice, but I love me some biased Jack Edwards commentary, especially when he's flipping shit at teams like the Leafs.

In case you haven't been in the Quick Hits posts the last few days, our own Nickname1234 has been keeping a spreadsheet on the playoff race. Here's how it looks right now. 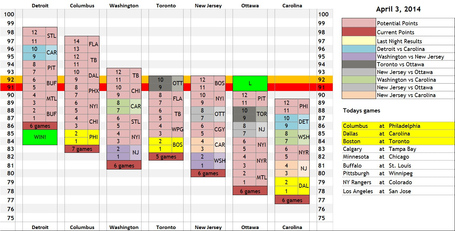 So what are you watching?