Back in November I did a piece on Tomas Tatar, taking an analytic look at his tremendous on-ice contributions, and his uncanny ability to make everyone he plays with better. I wanted to take a similar look at Brendan Smith, because I think he's quickly becoming the most interesting player on the roster. He's playing in a bigger role now that Ericsson is sidelined with an injury, and depending on who you ask, he's either flourishing in the role, or he is everything that is wrong with the Detroit Red Wings. I can't think of anyone on the roster that's more polarizing at this point - some rave about him and his immense skills, some despise his frequent and occasionally spectacular miscues. My opinion of him fell somewhere in the middle. I continually feel like I see him string together several excellent games, then he has a game that is so awful I'm amazed he's in the NHL. So what do the numbers say? The answer may surprise you a little bit.

I'm going to assume you all have a good grasp of how Corsi% works as it's pretty simple and becoming increasingly common knowledge. Let's just take straight Corsi% of all defensemen for starters.

Wow. That's pretty emphatic. Ok, for starters, this is a very crude way of looking at defensemen. It's not fair to crown Smith as king of anything just purely from this. Maybe Smith gets super sheltered/offensive starts. Also, seeing Quincey/DeKeyser that low seems a little rough, right? But still, it's awfully difficult to be 2 full percentage points above the next best guy on the team this late in the season. So let's get some usage context. 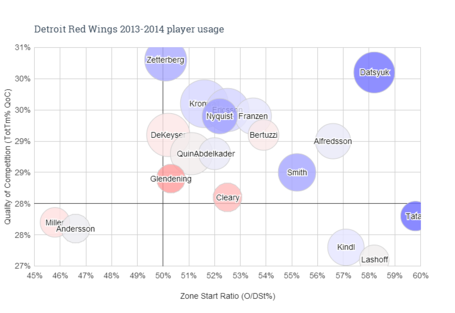 In case this is too difficult to follow, the way to read this is that further to the right means more favorable zone starts (offensive zone instead of defensive zone), and higher up means more difficult competition. So there's no doubt here that Smith is put in more offensive positions than the top-4 and easier competition. DeKeyser/Quincey's very difficult zone starts definitely explain their lower-than-expected Corsi%. Still, you can see from this that Smith is much less sheltered than Kindl and Lashoff, and yet he's turned it into much better numbers. He's not totally sheltered, so his production doesn't appear to be a complete mirage. Anyway, the next thing I wanted to see is his impact on other defensemen. Smith is in the unique position of having played with more defensive partners than most other guys. He's spent significant time with Quincey, Lashoff, Kronwall, and even Kindl. Let's see how he's affected the performance of those different partners. The following table is sorted from most common to least common partner. I hesitate to include DeKeyser there at the end because the sample is so small that it's hard to fairly include it, but I went ahead and did it anyway just for completeness.

Well then. Literally every single defenseman posted better possession numbers with Smith as their partner. When Smith plays against soft competition with Lashoff, his numbers are truly eye-popping. More encouraging though is that not only has he not been dragging Kronwall down in his stints with him, but he seems to be making him better. We can't say this for sure, because there are a variety of other factors (like which forwards he's playing with). However, there's enough smoke here to suggest that there certainly is a fire - in a good way that is.

Ok, maybe you don't buy these "fancy stats" - or perhaps they're too confusing to bother with. Certainly fair! Let's look at some traditional stats. After all, Kronwall has 3x as many points as Smith does. Fancy numbers aside, where's the production from Smith? The obvious problem is Smith does not play on the power play. That's a discussion for another post, but how about we ONLY look at point production from 5v5 play? That should be a nice equalizer, right? The other problem is some players don't play as often as others at 5v5 either. So I'm going to include two columns here - one for total points, and one that divides it by ice time (points per 60 minutes of ice time). That should give us a balanced view using easy-to-understand traditional stats.

This was the chart that dropped my jaw. The Wings just flat-out produce points at a much faster rate when Smith is on the ice, and it's not even all that close. Especially fascinating is the vast divide between Smith and 3 of his most common partners - Kindl, Quincey, and Lashoff. We've already seen that Smith improves their corsi%, but now we see that when goals were scored, Smith got a point out of it more often than any of those guys. For fun, here's a stat that I didn't know existed until today. IPP% measures the percentage of on-ice goals scored that this player got a point on. So, if a player has a 25% IPP and 40 goals were scored with him on the ice, that means he got a goal or assist on 10 of them. Also, we're still only talking about 5v5 play here. Here's that measurement.

I'm not so sure this particular chart means a whole lot, but it goes to show again that when the Wings score when Smith is on the ice, he very frequently played a role in that goal happening. Evidence absolutely suggests that more goals are going in the net because of Smith's abilities. It's very possible his inflated number is due to spending a lot of 5v5 time with offensively-challenged Lashoff, forcing him to run play a bit more, but even so if it works... This seems like the kind of stat where a defenseman's ability to read the defense and make the correct pass would really shine, and that seems to be showing up for Smith. I did take some time to look at his possession stats last year, and while they were pretty good last year too, this year is a significant improvement on every single stat listed above - he's just flat-out been way better this year, statistically speaking.

I'd like to caution over-concluding here, because defensemen are even harder to quantify with stats like this than forwards. That caveat aside, when you have numbers that are this much better than your teammate, you are absolutely doing something right, even if you're doing some wrong things too. Here are the conclusions I'm drawing from this:

Feel free to draw your own conclusions in the comments. :)