[Ed note: We'd like to introduce you to our newest staff writer, Wingedoctopus, who's been wowing us with great fanposts doing player evals lately. We're thrilled to have him on board doing more of this stuff. Please give him a warm welcome.]

Kyle Quincey has been a source of heated debate amongst Wings fans ever since Detroit made an oft-criticized trade to bring him back to the team that drafted him. You don't have to search too deeply into the comment section of Wings blogosphere to see "Quincey sucks" comments. Well, here we are at the end of the 2013-2014 season, and we finally have 82 games worth of Kyle Quincey to fully evaluate. Does Kyle Quincey suck? He was literally the only Detroit defenseman to play 82 games this year, for starters. There was a growing consensus as the season progressed that Kyle Quincey was getting better. Was this due to his defensive partner Danny DeKeyser's generally solid play? Or was Quincey actually improving? Further, if he IS getting better, is it worth trying to bring him back next year given his pending UFA status?

There's a lot of questions worth exploring, so I decided to do some deep-diving into what the statistics say about Kyle Quincey's play this year. There's a lot to look at here, so let's first take a quick and dirty look at the possession stats for Detroit's defensemen.

Okay, so don't jump to too many conclusions just from this. First off, Quincey spent roughly 2/3rds of his even strength time this year with DeKeyser (the rest was mostly spent with Brendan Smith). Also, no defenseman had a higher percentage of defensive zone starts than Quincey's frequent partner Danny DeKeyser. Let's try to visualize usage/performance for Detroit's top 5 defensemen: 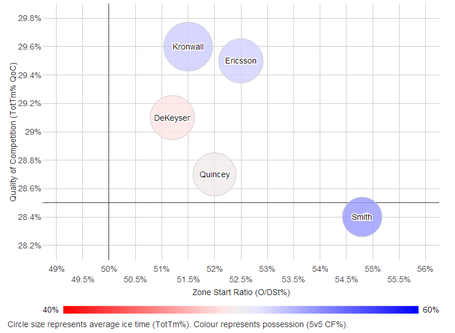 Further to the right indicates more offensive zone starts, higher up indicates higher competition quality, red/blue scale represents possession numbers. I didn't include Lashoff and Kindl here, but if they were included they would be far below Smith - Smith's competition looks difficult in comparison to how sheltered Lashoff and Kindl were.

I'm going to consider the top 4 here as pairings since they spent so much time together. Immediately you can see that Detroit just didn't get enough out of their second pairing. DeKeyser and Quincey may have had slightly more defensive zone draws than Kronwall/Ericsson, but it wasn't that big of a difference. They also faced weaker competition, but they still put in worse results. To be clear, this isn't disastrous results from Quincey and DeKeyser, but if you want to be a true contender, you need to get more than this out of your second pairing. Chicago's equivalent pairing gets around 53% possession numbers compared to the 49% turned in here by Quincey and DeKeyser.

Let's take a look at other factors. We've established that this year's second pairing was a bit of a weakness, but we don't really know why. Here's an updated chart that I looked at back when we looked at Brendan Smith's offensive production. This takes all the points scored at even-strength (since some guys get more opportunity due to PP time) and divides it by the amount of time they've gotten on the ice.

Oof. Only the severely offensively-challenged Brian Lashoff was worse than Quincey in this regard. Again, sure he's getting a slight disadvantage in zone starts, but DeKeyser got it even rougher on that front, and he managed to put in points more frequently. Quincey's second most frequent partner Brendan Smith put in points nearly twice as frequently as Quincey. Some of this could definitely be attributed to luck, but that's still a weakness for sure. To get an idea of how much of a weakness that second pairing is, let's take a look at the top 4 scoring defensemen at even strength from that dominant 07-08 Wings team:

Those are some obscene numbers when contrasted with what Detroit got from its blue line this year. A lot of that is just because that Wings team spent more time in the offensive zone and scored more goals so there was far more points to go around, but the Wings really can't afford to have a second pairing where both guys are down that low in point production. Quincey and DeKeyser as a pairing did an okay job of spending time in the offensive zone, but they sure didn't get many individual results to show for it.

Offense is of course only one facet of the game. The possession numbers above 49% at least suggest that the DeKeyser/Quincey pairing wasn't awful defensively, even if they weren't necessarily outstanding. I was hoping I could find another way to measure defensive zone quality, so I actually took a look at JJ's CSSI. One of the thing JJ tracks is coverage mistakes on goals. You have to be careful with drawing TOO many conclusions just on goals given the luck-driven nature of goals at times, but when he's literally looked at every goal with a fine-tooth comb to assign blame, there's absolutely things that can be learned. I decided to take a look at coverage minuses. The totals were distorted a bit by the fact that some guys played more/less than others, so I'm going to look at coverage minuses per game.
Keep in mind here that this is only factoring in games played, not minutes played, usage, or competition, so Kindl and Lashoff's minuses here are undersold a bit. DeKeyser and Kronwall's numbers here are most impressive, given that Smith was sheltered more than both of them.
Given the above context, we know that Quincey played a lot with DeKeyser, getting slightly softer competition and zone starts than DeKeyser. Despite this, he nearly doubled DeKeyser's amount of coverage mistakes leading directly to a goal. That's pretty tough. Every other game Kyle Quincey made a coverage mistake that led to a goal against, as opposed to once every 4 games by Danny DeKeyser. That's a pretty staggering difference. JJ noted during the season and in yesterday's CSSI wrap-up post that Quincey did improve in this regard late in the season, but he never did fully put it together.

Conclusions for the offseason

Kyle Quincey does not suck as many internet commenters would have you believe. We've looked at some numbers that do not paint him in a great light here, but you do not put up a corsi that is nearly 50% in a more defensive role and suck. Kyle Quincey absolutely belongs on an NHL roster, and I would happily bet that you can win a cup with him getting regular minutes on your roster. However, the question we really care about here is not if he sucks, but if he deserves to be brought back to the team as a UFA. The above numbers suggest that as a second pairing defenseman, he does not fit well on this team. I think the evidence suggests Quincey's numbers would look a lot sharper if he was on a more sheltered 3rd pairing.
However, Quincey is coming off a $3.775M cap hit, and he is entering a UFA class that is not very impressive on the blue line. Kyle Quincey is going to be paid like a 2nd line d-man next year, whether that's in Detroit or somewhere else. The cap is going up, UFA options are thin, and he was a second pairing guy on a playoff team. He's going to get at least a minor raise. Is it worth it to hand him that kind of money to be a below-average 2nd pairing guy? Danny DeKeyser as an RFA will probably be signed to a deal a fraction of what Quincey will get as a UFA, and we've got evidence above that suggests he was the better half of this iffy pairing. After looking at all this, I believe Detroit should let Quincey walk. Let him go to a team that can pay him and pair him with a right-handed defenseman. Good chance he looks better that way. The emergence of Brendan Smith in the second half of the season and into the playoffs really helps make this decision easier.
In a future post, I'm going to dive into UFAs that I believe would serve as potential Quincey replacements, especially doing some deep bargain hunting for some guys who may be a bit underrated. There's always a chance Detroit avoids the UFA market entirely, but there's no harm in taking a look at the options that are out there.