Matt Niskanen is probably the most popular name being thrown around in the Wings blogosphere as a UFA target. There's good reason behind this - Niskanen is a young right-handed dman entering his prime who can move the puck, put up excellent possession numbers, and log very effective PP minutes. He's got loads and loads of talent, and he's likely to get a well-deserved large contract this summer. The real question for the Wings is - just how good is he? Is he worth really throwing big money at? Or is the hype unjustified? Let's take a deeper look at his numbers this season to try to get a better idea of just how good Matt Niskanen was this season.

Pittsburgh's defensive corps was notoriously injured this season, so it's difficult to compare them to each other. However, let's take Pittsburgh's biggest names and do a quick comparison. I'll include games played so that we can get a rough idea of the sample sizes we're dealing with.

Niskanen's performance relative to his peers is completely stunning here. This is where you start to learn the dirty little secret of this year's Pittsburgh Penguins - they weren't very good at even strength. Their record this season was halfway a fast start in a slow starting division and halfway a reflection of their excellent special teams and the otherworldly play of Sidney Crosby. To drive this home, check this out:

This is staggering. If this doesn't mean anything to you, let's look at some comparables. If the Penguins had finished this season with a 53.4% corsi, that would have been good for 6th place between the Sharks and the Rangers. In other words, legit Cup contender. If the Penguins had finished with a 46.1% corsi, that would have put them at 26th, ahead of only the Flames, Maple Leafs, Oilers, and Sabres. The Pittsburgh Penguins at even strength were a very good team with Niskanen on the ice and a horrific team with Niskanen on the bench.

Before we get any further, here's a very mild disclaimer. 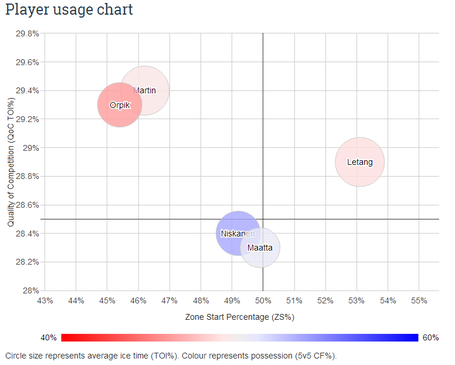 Matt Niskanen essentially played second pairing minutes this year, even though Brooks Orpik played first pairing minutes and was atrocious with them. Niskanen played tougher minutes than any Pittsburgh defender not on this graph, but he was basically the second pairing mainstay. However, he still started in the d-zone more than the o-zone, so it's not like he was extremely sheltered. In fact, these were the toughest minutes of his career, and it resulted in the best season of his career. Everything about this graph suggests that, if anything, Niskanen may be ready for even bigger minutes. Next, let's do some sanity checking and see how some key players do with Niskanen. I'm going to take Pittsburgh's top centers (Crosby/Malkin) and then Niskanen's two most frequent defensive partners.

Amazing stuff. Look at that Scuderi number, yeesh. So, there's two key things here. First, Niskanen hardly got any time paired with any of Pittsburgh's star defenders - almost no Martin/Letang time at all. Despite this, he still put up the best numbers on the team despite playing almost all his time with rookie Olli Maatta and lol-worthy boat anchor Rob Scuderi. Niskanen grinding out a 52% corsi (above-average for the Penguins) during his minutes that were saddled with Scuderi may be the most impressive thing on his resume - any other pairing that included Scuderi was a complete abomination this season.

Matt Niskanen isn't just potential or upside, he's a legitimate star right now, and from the above numbers you can make a pretty convincing case that he was the Penguins most valuable defender this season. There's one huge line of reasoning against Niskanen floating around, and I wanted to address it here. Myth: Matt Niskanen is a one-year wonder.

It's true that this year's 46 points from Niskanen is up considerably from 21 and 14 the previous two seasons. It's also very possible he doesn't put up that many points next season. What's just not true, though, is that it was fluky. The real driver here probably just has to do with opportunity. First off, last season was a shortened season where he played just 40 games. Let's compare the last 3 seasons, and I'm going to double all of last season's numbers to give him 80 games, a fair comparison with 81 games this season. Assuming this, here's what his overall numbers look like.

For starters, it looks to me to be partially just increased opportunity. Minutes went up, and as a defenseman, the more minutes you get, the more time you get to spend on the ice with stars like Crosby and Malkin. This past season was a bigger jump than just minutes, however. The answer is the power play. In 2012-2013 he got limited PP time - just 2 points, which projects out to 4 points if we double it like we are doing in the chart above. This season he got 15 points on the PP. So if we take out the difference of 11 points, we have just a 7 point jump over the previous season, no different than the 7 point jump the previous season. So to recap, his first jump seems to come from increased minutes, his second jump comes largely from increased PP time. Was this season a fluke, or was Niskanen finally just given increased opportunity? The evidence points to the latter.

The price tag on Niskanen is going to be large, no question. It may even take an overpay, one that Red Wings fans may feel uncomfortable with. He is absolutely going to cost more than the previously discussed Anton Stralman. If you want to debate over what kind of contract he's worth, that's a very real discussion. However, there is very little doubt that Matt Niskanen is an excellent player right this minute, and that makes him very valuable and worth pursuing as a UFA.