Should Detroit Make The Trade?

Share All sharing options for: Should Detroit Make The Trade?

Let's face it, folks. We need help. We're quickly approaching a fork in the road as an organization. Do we take the path of "win now" and trade up assets to acquire that blue-liner that we so desperately need to anchor our bleeding special teams? The other path leads us to the dreaded word.. Rebuild. Now, now, now, just because every other team sucks at it, doesn't mean rebuilding automatically requires tanking. Sure, it helps BIG time.. But you can certainly rebuild your team without completely shitting the bed for three to four years straight. Detroit has a pretty decent pipeline of talent in their system.. Anthony Mantha, Dylan Larkin, Ryan Sproul, Xavier Ouellet, Alexey Marchenko, Teemu Pulkkinen, Tomas Jurco, Martin Frk(?), Tomas Nosek, Petr Mrazek... The list goes on. You have five newly-acquired centers from this year's draft.. I tend to think general managers worth their own in this business start building their teams from the center, and then add pieces around them.. Much like you would with a quarterback on a football team.

On the other hand, Detroit still has a few years left in players like Henrik Zetterberg, Pavel Datsyuk, and Niklas Kronwall. They can go either way, literally. Win now, or attempt to reload/rebuild/whatever you want to call it that helps you sleep at night. I'm gonna call it a rebuild. You have a brand-new state-of-the-art arena on the horizon... Why not build a new team to go in it?

Is trading up assets to acquire a blue-liner a good idea? In many cases, yeah. If it makes your team better, then you do it. However, it really matters on who you're trading for. The names going through the rumor-mill here in Detroit are Mike Green, Jeff Petry, and Tyler Myers.

Let's get one thing straight right now, Tyler Myers is a big fat nope for me. He's not worth trading the assets that Buffalo is demanding. You want Anthony Mantha for Myers? Yeah.. No. Nope. Nopenopenope.

Could you promote a player like Marchenko or Sproul? Yes. That might be a great option, in fact... But it's one that is also a big gamble. You'd be basing it off of an awfully large sample-size at the NHL level, and as for a guy who says he likes to use "gut analytics," I just don't buy that the team will fill the need from within the organization.

I've thought about it... I'm willing to part with a player like Tomas Tatar, even though I don't really want to.. Like, I reaaaaally don't want to. Outside of that, other possible trade chips are 2nd round picks, Darren Helm, Jakub Kindl, Teemu Pulkkinen, Xavier Ouellet, and Justin Abdelkader. Not exactly the most appealing of trade chips, right? Right. Why am I being so stingy? Because if we were to acquire a blue-liner like Myers, Green, or Petry.. Does that make us a clear-cut contender? I don't really know. Can the team stay healthy enough? I don't really know. Mike Green and Jeff Petry are players that will need to be re-signed after the 2014-2015 season, and if this offseason has taught us anything at all.. It's that players aren't exactly chomping at the bit to throw on a Winged Wheel like they used to.

Washington needs a 2nd line center. I'm sorry, but Riley Sheahan stays in Detroit. I'd like to build around him as a 2nd or 3rd line center. The other day, Tyler Dellow (@mc79hockey) mentioned Edmonton needing a 3rd line center. I threw a comment out there along the lines of "I'll give you Darren Helm and possibly another piece if it means Jeff Petry comes to Detroit."
It wasn't long until Oilers fans were all over me, talking about how much they would love that trade. I know, it's just fans.. Fans of a team who is basically hopeless, broken, and will probably not be fixed anytime soon. But it makes you think.

If it's between trading Tomas Tatar + other assets for a possible rental defenseman like Mike Green, or trading Darren Helm + another asset for Jeff Petry.. I take Petry 10 times out of 10.

Out of all Edmonton defensemen, Petry held probably the most minutes against toughest competition. He played in 80 games, is 26 years old, and oh hey he's a righty. Throw into the mix that he's from Ann Arbor and I would like to think Red Wings brass is completely gaga over him. When it comes down to the three names on the list... I'm thinking Jeff Petry. While he's not a huge point-scoring defenseman, he's more sound in other areas that can help Detroit. Plus, maybe you have a better chance at extending his contract because he's back home? Who knows. Either way, I think Jeff Petry is the guy Detroit should dial in on. 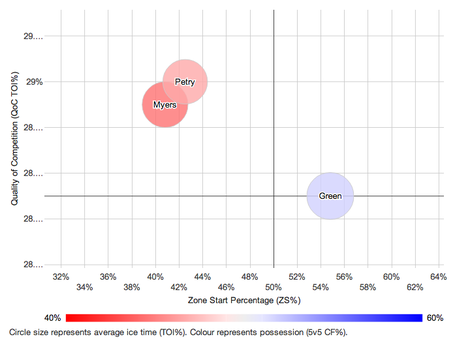 Chart via ExtraSkater.com (click the link for more stat breakdowns on all three players)

Green looks like a better choice, but keep in mind the team Petry was playing on. Both Edmonton and Washington were in the bottom five teams for Fenwick% when at even-strength, but Green was also much more sheltered than Petry.

All-in-all, any one of the three rumored defensemen Detroit has inquired about would make the team better NOW. However, I think the most important part of a potential trade is asset-management.. Something that this team hasn't been very good with... Ever. No more panic trades, please.