Brian Lashoff was brought up for a few games with the Red Wings last season in the 2013 rendition of Injury Apocalypse. When he managed to not suck in a heavily sheltered 3rd pairing role, he was given a relatively inexpensive 3x725K contract and a roster spot to be the team's 6/7 defenseman. It wasn't necessarily a terrible idea - Lashoff could be generally OK and was a passable penalty killer, and with a contract that cheap - well someone's gotta be the 7th d-man in a pinch. The Red Wings came into the 2013-2014 season with Lashoff penciled in as the #7 guy, and all seemed okay. Then something strange happened: Brian Lashoff played in an astounding 75 games - good for 4th place on the entire team. That suggests he was either sneaky good or badly overplayed, so I wanted to take a look at which was reality. From there I'll draw a few conclusions about last season and what it means going forward.

Let's just take a quick glance at the D in general.

As an aside: all hail Brendan Smith. He's the only guy to play on all 3 pairings, and he rocked it regardless of who his partner was.

That out of the way, we're here to talk about Lashoff. 50.4% doesn't sound so bad out of a 3rd pairing guy. It's not awesome, but it's not like that's an atrocious number - you can win with that on your 3rd pairing. The real flaw in the blueline would appear to be that second pairing (and to a large degree, it was), but that's a discussion for a different time. However, let's take a look at usage. 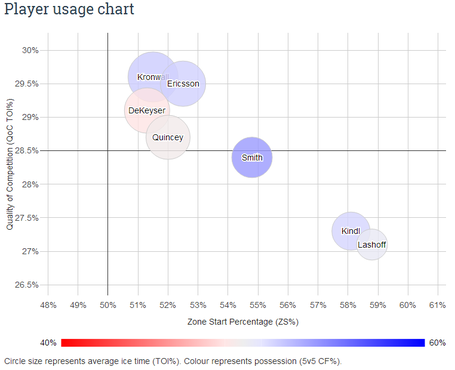 So before giving too many accolades to Lashoff, this is our reminder that he was far and away the most sheltered guy out there. Kindl got better results despite being ever-so-slightly less sheltered. Brendan Smith crushed him despite spending enough time on top pairings to have much tougher competition. DeKeyser and Quincey may have struggled immensely, but at least they did it against top players. However, a deeper look raises a few concerns to me about Lashoff's play on the 3rd pairing. Let's take a look at Lashoff's results with and without 3 players in particular. The first two were his primary d-partners, the other one is the Wings resident possession monster - Tomas Tatar. Numbers here are raw corsi%.

Kindl and Lashoff played a good majority of their minutes together, and they were pretty much fine together. Numbers here suggest that Kindl pulls a bit more of the weight, but it's certainly not proof. What I'm a little more interested in is the next line. Lashoff got to play 21% of his minutes with Brendan Smith. When he didn't have Smith pulling things, he looks very ordinary - and that's still with extremely sheltered minutes. Keep in mind that Smith with Lashoff is playing those massively sheltered minutes. When Smith made the jump to a tougher pairing, his corsi essentially stayed the same. Naturally you would expect a bit of a dip with tougher competition, so I have to question how much Lashoff was holding him back.

Most interesting to me though is what I'm starting to call the Tomas Tatar Effect. Lashoff played 29% of his minutes with Tomas Tatar - slightly more than you'd expect from random chance. This probably had something to do with Babcock not wanting his top line stuck with Lashoff - Lashoff got just 81 minutes with Zetterberg the entire season. However, nobody on the team this season boosted possession numbers like Tatar. So suffice it to say it concerns me a bit to see that during the 71% of the time Lashoff was not fortunate enough to be with Tatar, he wasn't very good at all. It should be noted that there's a mild selection bias here (Tatar was a bit sheltered too, so Lashoff's minutes with him were probably some of his easier minutes), but there's still an uncomfortable trend that Lashoff barely broke even despite playing the easiest minutes on the team and playing with some of the best possession players on the team.

I don't think Brian Lashoff was especially terrible or anything, but he wasn't very good either. You can completely accept his performance for 20 games by a 7th d-man, but I'm not sure you can accept it for 75 games. In a world where you don't have anybody else, Lashoff's usage can probably be excused. However, is that really the case?

I don't want to derail this into another Holland/Babcock post, but we do need to talk about Lashoff's usage here. I'm pretty comfortable saying Lashoff's above performance is hovering around replacement-level. That is to say - it's not egregiously bad, but it's a level of mediocrity that most teams could instantly replicate simply by bringing up their best AHL defender. What's concerning to me is why other options weren't explored until the playoffs were basically over. The Red Wings talked all season about how they've got 3-4 d-men who are about ready. If they're already sheltering the crap out of their 6th d-man, why not heavily shelter one of the young guys from Grand Rapids who actually have a future with the team? I like the idea of a hypothetical world where each of those 4 guys got a half dozen game "try-out" with the team. Lashoff sits in the press box where your 7th d-man is supposed to sit frequently, and Oullet, Sproul, Marchenko, Almquist, Backman, or whoever each get a few weeks to play with the big team. If they out-perform Lashoff, great! You have a new 3rd pair d-man, and Lashoff can go back to actually being the 7th/8th guy. If they don't, fine. Now you know for sure that the kids need more time under Blashill.

One could argue that it sort of happened, but I'm not so sure that's true. Oullet got 4 games, one of which he only got because the game was meaningless. Nobody else got more than 2. In fact, the only one that got 2 is no longer playing in North America. All of them put up very solid numbers in their extremely small sample-size cameos. It would be one thing if Lashoff was performing really well, but from the numbers above, it sure seems like he was massively sheltered and still barely treading water. Surely one of Oullet, Sproul, or Marchenko would have been capable of treading water too at a minimum. Sproul and Oullet did far better than treading water in their very brief time in the lineup, so it's not like the kids came up and got buried.

The issue with Brian Lashoff doesn't appear to me to actually be Brian Lashoff so much as it is how frequently he plays in a Red Wings uniform. If the team wasn't flush with defensive prospects, I wouldn't bat an eye at his performance. However, given the actual situation in Grand Rapids, I really question the wisdom of giving him 75 games.

So what does this mean for this season? For better or for worse, it does appear that Detroit will enter the season with the exact same guys on D as last season. I would suggest learning from last year's mistakes and adjusting how Lashoff is used. Lashoff's $725K cap hit is able to be entirely buried in Grand Rapids. Detroit has plenty of cap wiggle room anyway, so with the kids being a year older, I don't see any more reason for Lashoff to be in Detroit. Kronwall, Ericsson, DeKeyser, Quincey, and Smith are all capable of filling the first 5 everyday spots in one way or another. I would give the 6th spot to whichever kid does the best job in camp, keep Kindl as the 7th (given his superior performance over Lashoff this past season), and send Lashoff back down. Shelter the kid in the same way Lashoff was sheltered, and see if the performance improves. If it doesn't, slide Kindl back in or give a different kid a shot. Detroit badly needs to figure out if their defensive prospects are as good as advertised, and Brian Lashoff turned in an entirely replaceable 2013-2014 performance. To me, that's a clear problem with a clear solution, I just hope the Red Wings see it the same way.