Could Tomas Jurco Be a Future NHL Star?

Share All sharing options for: Could Tomas Jurco Be a Future NHL Star?

It's not very often you see a player with the gift that our sumptuous Slovakian stick-handling Tomas Jurco has. Sure, he can toss the puck around on his stick and make fancy moves. Stuff that will never get used in the game (or will it?), but I think we're not seeing what Jurky is actually doing here. I'll admit, since the Daniel Cleary re-signing, I've been digging into Jurco's first season with the Red Wings a lot more. Though he didn't put up huge standard stats, his impact in the advanced statistics was extremely eye-opening.

First, I'd like to cover WOWY. WOWY, basically, means "with or without you." It's a way to show how players fare when a certain player is and isn't on the ice. Somewhat straight forward, in many regards. I like to use Corsi as a measuring tool with WOWY. For those of you unaware of what Corsi is, it's a fancy word for shot-attempts. Whether it's on net, missed, or blocked. It measures possession. More shot attempts = You have the puck on your stick more often.

It's really no secret.. Tomas Jurco was one of the most sheltered forwards on the team last year. He started over 67% of his shifts in the offensive zone, against lower-grade competition. Here is a look at his zone-adjusted WOWY CorsiFor%: 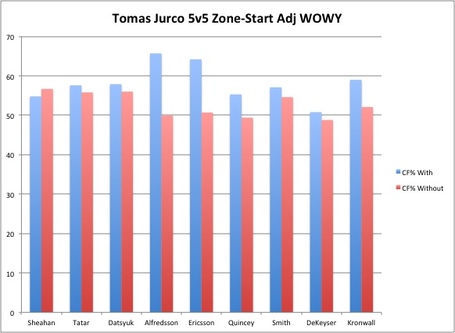 As you can see, the blue indicates when he is on the ice, and the red is indicating when he is off. Quite an eye-opener for me. Though maybe he didn't put up a lot of points, and even though he was heavily sheltered, I think it's telling that he can beat up on lesser quality of competition, and he is showing that when he plays with good linemates like Pavel Datsyuk, or Daniel Alfredsson, he can work very well and make an impact.

Tomas is 21 years old. There's a lot of talk about him being snubbed back into the AHL because of roster-related issues. He's making a much bigger impact at his age in the NHL than say, Gustav Nyquist or Tomas Tatar did. Will more seasoning in the AHL make any sense for this kid? No, probably not. Competition level between the NHL and AHL are night and day, obviously. He's proven that when sheltered, he can make an impact. As he gets more experience, I have confidence that he will be able to duplicate his results against a higher quality of competition.

It's important to note that he's still young, and mistakes are bound to happen. I think the 'Kid Line' is the ideal 3rd line to have. Essentially you have two scoring wingers in Tatar/Jurco and a helluva set-up center with Riley Sheahan. Throttling their quality of competition can make for a nasty goal-thirsty trio. It's clear they can handle their own against a throttled quality of competition: 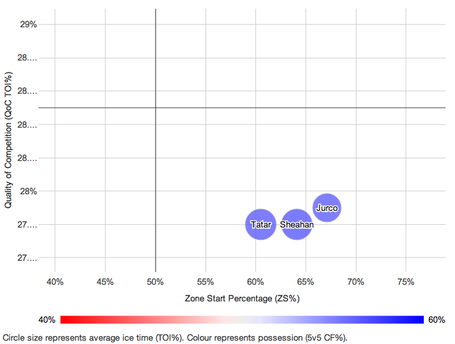 The shade of each player's bubble is indicating positive 5v5 corsi numbers. So it's very rare that they're getting manhandled by 3rd line, even 2nd line competition. You see Jurco's QoC is a bit higher, because there was a point where he was spending time with Datsyuk, in which he handled extremely well, I thought. The 36 games he played this year taught him how to use his big frame as an advantage.. Once he can put that together with his elite puck-handling abilities, I don't see how this kid COULDN'T become a star player.

Will he start in Detroit this season? I'm doubtful.. Will he end up in Detroit later on? Absolutely. I don't think the team will be able to stay as healthy as everyone anticipates. My prediction is that Jurco sees 50 games in the NHL this year. Don't forget that after this season, he will no longer be waiver-exempt and will be a restricted free agent. My hopes is that by then, Jurco's game is much more refined and he can make a push to be the top-six winger that he can be.