Ladies and gentlemen, we have a tie! Last week's photo had several good captions, and tw o of them were so popular that a winner could not be determined. Since Gary Bettman doesn't run this joint, we're going with old school rules and leaving both captions as the winner. No shoot outs necessary.

This was the photo up for caption... 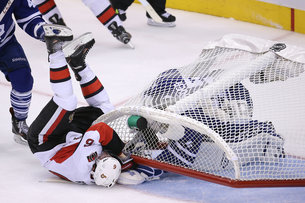 and the two winning captions ( in order of submission) are...

"As if scoring a goal on Toronto wasn't already easy enough, here we see Bobby Ryan lowering the bar even further"

Crikey!
I believe our biggest issue is the same biggest issue that the whole world is facing, and that`s habitat destruction. - Steve Irwin 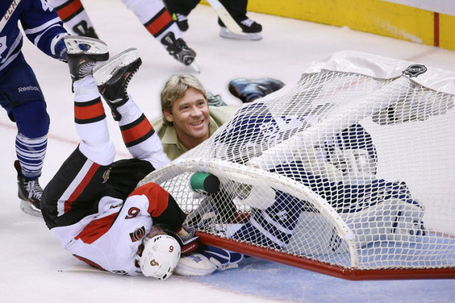 Having a laugh at the expense of Bobby Ryan AND the Maple Leafs? Yes please.

Goalie habitat destruction is no laughing matter however. There's nothing more heartbreaking than a goalie without a crease to live in, and a net to defend. Watch for Sarah McLachlan's "homeless goalie" PSA's coming soon.

This week the caption contest is going international.

You know how this works.

Post your funny, witty, creative captions for the header image. You may use words, pictures, .gifs, and any other creative genius you come up with, Each rec a caption receives is a vote, so if you like a caption, rec it... rec it good. Whichever caption receives the most votes is the winner.