Disclaimer: OriginalStix has provided WIIM with a complimentary iPhone case. This is a review of their product for blog readers that may be interested.

One thing is for certain, OriginalStix makes one of the most unique iPhone case I've ever seen. The concept manages to be both simple and complex at the same time - they take a basic iPhone 5/5s case shell and fill the hollowed-out back with pieces from game-used hockey sticks. One of the company's co-founders had this to say about the origin of the concept: "I always found it interesting when products could be re-purposed into something entirely different, so the inspiration behind Original Stix actually came from a number of experiences growing up and playing hockey in the Detroit area. When I was a kid, I had these hockey cards that had pieces of game used jerseys or sticks, and I had this Pure Detroit belt made with the seatbelt buckle from a Hummer that I always thought was cool . . . but the idea really clicked right after graduating one day when I saw an iPad case carved out of wood. I thought back to the other repurposed products, and the idea just kind of came to me." It's certainly a neat idea, and today I'd like to take a look at the pros and cons of this interesting new product. 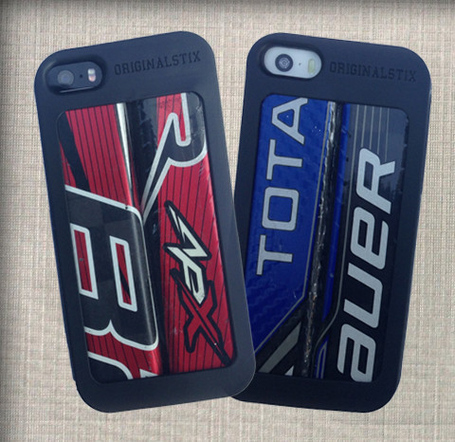 I was initially a little concerned about how snugly the case would fit - the two pieces of the stick you can see in the back are actually not glued into place, but you have to set them in the lining of the case. The reason for this is to keep the case thin and allow you to swap out the sticks and/or trade them with friends, and thankfully this was very easy. Once I popped the phone into the case it was 100% snug and fit perfectly. The stick pieces are cut so thinly that there is no bulk whatsoever to the phone, which is really nice. I think I was halfway expecting it to resemble an Otterbox in terms of adding significant bulk, but it was nothing like that at all.

Also, it just flat-out looks really cool. Here's a picture with it on my iPhone 5: 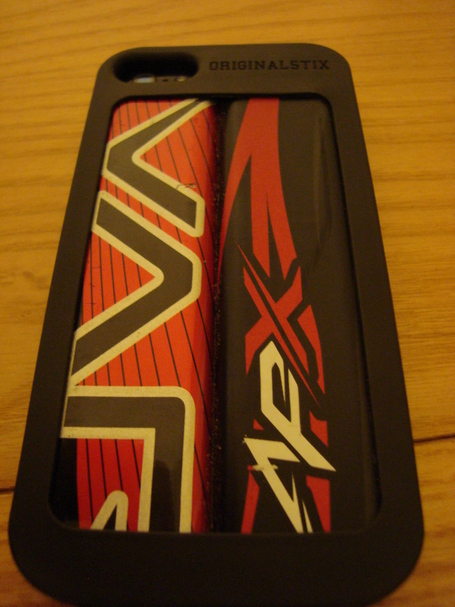 The product is really nice, but an added bonus for me is that the very young company is based in the Detroit area with their office located on Brush Street downtown. I've grown up around Detroit, and seeing the city start to rebuild is a side passion of mine, so I'm always happy to see start-ups decide to locate themselves in the city proper. Many Wings fans don't actually have specific ties to the Detroit area, but if you are among the majority that do, the chance to support a local company is a nice bonus.

There really isn't much of anything to complain about with the case itself, but the primary negative right now is the limited selection. It's currently only available for the iPhone 5 and 5s. OriginalStix has told me they plan to introduce cases for the iPhone 5c, Samsung Galaxy S5, and iPad in the future, but currently there's not much you can do if you don't have an iPhone 5 or 5s. Also, if you're the type of accident-prone person that relies exclusively on heavy-duty protective cases, you are sacrificing a bit of bulk. The back of the phone is very well protected obviously, but the sides of the case don't extend very far past the front screen of the phone, meaning a face-down drop is probably trouble. This is normal with most cases, but it's a consideration to make if accounting for frequent phone drops is a much bigger priority than style.

If you're an iPhone user and a hockey fan looking for a stylish case, it's hard to go wrong with this one. I've been using it about a week, and so far I've gotten asked about the case almost daily by friends, family, and co-workers. The unique design really seems to be eye-catching in my experience so far. Due to the limited selection, the case really only appeals to a specific segment of smartphone users; however, the execution on the case itself is pretty great and definitely exceeded my expectations. Verdict: Recommended.