Welcome to the final photo caption contest of August 2014. Yes, August is almost behind us, and September is a mere week away, bringing with it hockey! In two and a half weeks, the Prospect Tournament will be underway, one more week after that and Training Camp will be here, and near the end of training camp is pre-season hockey!

Last week's photo had several great captions, but The Datsukian One came out on top with the most rec's. 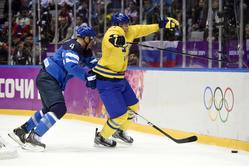 I hope to hell that's not Lucic behind me...
...'cause I wanna have kids some day

If it had been Lucic behind Eriksson, at least we know Loui would get the recovery support he needed by attending Danny DeKeyser's "Testicularly Assaulted By Milan Lucic" support group.

You know how this works.

Post your funny, witty, creative captions for the header image. You may use words, pictures, .gifs, and any other creative genius you come up with, Each rec a caption receives is a vote, so if you like a caption, rec it... rec it good. Whichever caption receives the most votes is the winner.