Last time we looked at Jimmy Howard, we focused on Quality Starts and Really Bad Starts as a way of figuring out the nature of how such a good goaltender can get to frustrate his fanbase. While Howard has been one of the best goaltenders in the NHL over the past three seasons at providing his team with a chance to win, he's also one of the more prolific among the starters at dropping crease-deuces.

It seems pretty obvious from this that Jimmy Howard would also tend more towards being a little wilder from game-to-game, but the idea of looking only at the very good starts and the very bad starts throws away about a quarter of a goalie's total starts. It's nice if a stat gets us there with only 75% of the work, but let's make sure that's actually what's happening first.

The average among the 47 goalies with 50 or more starts over the last three seasons for non-extreme starts(neither a Quality Start or a Really Bad Start) is 28.2%. Howard manages a non-quality/non-disaster start 22.8% of the time. By itself, this doesn't mean wilder. Tuukka Rask has the lowest non-extreme start percentage thanks to the fact that he logs in such a high percentage of his starts as quality. This does partially explain how Howard could have a low percentage. His career save percentage is Quality Start; of course he's going to have a lot of those.

So how much did Howard jump around? This much. 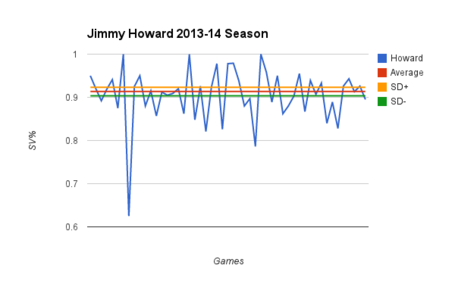 Ok, so this tells us that not many of his starts fell within one standard deviation of the league average. That's pretty common among the goalies though. What about individual standard deviations? For that, I've taken the top 30 goalies for total starts last season and have each of their standard deviations figured up. The higher the SD for a goaltender, the more he tended to bounce around game-by-game last season.

Howard is middle-of-the-road ranking-wise and a bit better than the average thanks to the bottom of the list dragging the average more than the top. For what we're looking for here, being below the median is worse than being above the mean. Howard isn't terrible about bouncing around from one game to the next, but he bounces more than half of the league's most-prolific starters.

(as a quick note, I threw out games where a player was very clearly hurt early and didn't get a chance to even have a bad game, as well as very short relief stints. I kept stinker starts in there though. Ben Bishop had two games where he saw exactly one shot on goal thrown out here and it made a huge difference).

One of the issues with using this method is that breaking down games played as individual data points is that one season isn't that much data to go over. Also, not all games are created equal thanks to overtime and goalie-pullings, but there's less I can do about that. To solve the sampling issue, I've taken three goalies who are fairly comparable to Howard in terms of performance and cap hit and I've also taken Henrik Lundqvist as the gold standard here for something of a control.

I thought about including a brown standard as well, but it's hard to find a bad goaltender with more than 270 games played over the last five years and it's not really that important. Here's how Howard compares to these four contemporaries over the five seasons he's been in the league as far as how much game-to-game deviation they've seen in setting their career save percentages.

Well that certainly makes me feel a little better about how much Jimmy Howard seems to bounce around from one appearance to another. It's still a might troubing based on my last post here which shows a goalie who was that much better before last season. Let's take that game-by-game chart and spread that out over Howard's five full seasons. 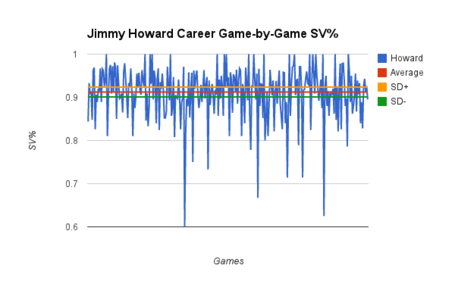 Since I'm using five years instead of the one, the average SV% is now at .91225 to reflect all the 'tenders who started at least 20 games in those five years.  You can see that there's quite a bit less jumping around earlier in his career than later. It's interesting that we got almost 100 games into Howard's career before he put up a true severe poo-for-all (also hilarious: he gave up four goals in that game and got away without taking a loss because Joey MacDonald allowed one goal on 12 shots and the Wings lost 5-4)

Of course, if we're going to say that Howard has gotten less predictable/stable lately, it's probably also worth mentioning at least a LITTLE BIT the overlap with the end of Nicklas Lidstrom's career. I can't say how much that's caused trouble, but my gut tells me it's not insignificant.

Next up, I want to look deeper into the Really Bad Starts and see what we can learn about how Jimmy bounces back or whether RBSs can be predicted. Stay tuned.