The Wings currently have the exact same defense they did last year, but there are four defensemen attending Training Camp who deserve a chance to make the big team and at least be the 6th defenseman. It's nearly impossible to say if the Wings will actually decide to promote one of these young d-men in trianing camp, but let's take a closer look at each of their strengths and weaknesses and make some guesses as to what this season will hold for them. 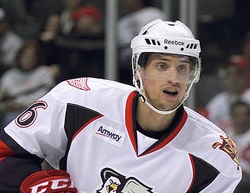 Mattias Backman came to North America at the end of the Griffins season last year and seamlessly made the transition to one of their best defensemen in the playoffs. He's the least experienced in North American play of the four young defensemen, but could eventually be a top 4 defenseman in the NHL who can play in every situation. This will be his first full season playing in North America

Strengths: This two-way defenseman's not a big physical player but Backman plays a smart, simple, cerebral game that makes him effective despite his size. He's an exceptional skater with great mobility who can make precision passes, or skate the puck up the ice himself. His has dynamic skating and puck moving abilities make him a great asset whether you need someone who can handle the defensive responsibilities, or someone who can contribute offensively. He's calm under pressure and isn't intimidated by larger players and he thinks the game so well that he's usually able to stay one step ahead and avoid putting himself in a position to be hit or taken advantage of. He's good on the penalty kill, and excellent quarterbacking the power play. He's able to play heavy minutes an can be relied upon in any situation.

Weaknesses: He's a slender player who had a very difficult time putting on weight, and he's not a physical player at all, and in the NHL his size will be more challenging. Occasionally makes poorly timed pinches which can result in opposing forwards getting past him. He's also sometimes gets off on his angles which throws everything off, I noticed this increasingly towards the end of the prospect tournament when mental and physical fatigue really set in. Perhaps it was his brain defaulting to habits and ingrained European ice training.

Expectations: Mike Babcock said he really liked Backman and that he would "step in and play on our team next year." whether that was his way of playing mental games with the other prospects, or he was really that impressed after Backman's debut with the Griffins last year, I don't know. I expect the Wings to "give" him some time in the AHL to fine tune his game, more thoroughly transition to North American Hockey, better learn the Wings system, etc... His short resume in Grand Rapids works against his favor, because the Red Wings don't like to take any risk or chance they aren't forced into. While he's in Grand Rapids this season, he'll be QB'ing the powerplay and will become one of the go-to defensemen on the team. 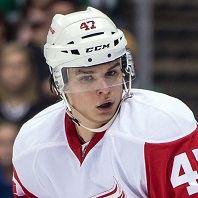 Marchenko made his North American debut last season with the Griffins, playing in 49 games and scoring 3 goals and 15 assists before a broken ankle sidelines him for the rest of the season (and summer). He also made his Red Wings debut on January 4th against the Dallas Stars. His ankle injury was serious enough that it required surgery and the insertion of pins. The pins weren't removed until the beginning of July, and he skated for the first time by himself in development camp. Before he was injured, he was the Griffins best defenseman almost every game.

Strengths: HE'S A RIGHTY! Oh sorry, I blacked out there for a moment. He's smart, steady, reliable, and is rock solid in his how zone. He's meticulous in everything he does and is dedicated both on and off the ice to master the basics and execute them with precision. He has a great outlet pass and move the puck well. He's a stalwart on the penalty kill and can be counted on to be defensively solid while helping the forwards be getting the puck efficiently and he doesn't often get beat. While he's not overly big, he's strong and handles himself very well against even bigger players.

Weaknesses: He doesn't shoot the puck a lot, and he's never been very offensive; last season in Grand Rapids was by far his most offensively productive season. Because of his attention to detail and meticulous nature, he can occasionally let the desire for the perfect play get him into trouble, instead of doing something "messier" that works in that instance.

Expectations: If his season hadn't ended his season on February 23rd, he would be the top defensive candidate to make the Wings in training camp. Since none of the diggers or reporters have said anything about his progress, or if he's even able to actually play right now, I expect him to come into training camp still rehabbing his knee and probably shaking off the rust. If he's up to speed and can play at the level he was in Grand Rapids last season, he would be my top pick to make the Wings out of camp, and the fact that he's a coveted right handed shot doesn't hurt.

In his rookie season with the Griffins, Ouellet quickly became trusted by Coach Blashill to play on the top pairings, and while the other rookies such as Sproul and Jensen were consistently paired with a veteran D-man, Ouellet was trusted to work with another rookie (first Marchenko and then Backman).

Strengths: Solid defenseman with excellent vision of the game (he trusted his eyes to Dr. Rehmani) and is rarely out of positiong. He's strong in the corners, wins puck battles, strong on the puck, and while he's not large be defensemen standard, he's strong and physically capable of laying big hits; just ask Joe Thornton or Andrew Desjardins, He's good at finding and identifying passing lanes and is efficient at getting the puck up to the forwards. He's Consistent and reliable game in and game out, he's a natural leader and a calming influence on whoever he's paired with. He's capable on the power play but really thrives on the penalty kill, if you're killing off a 5 on 3, Xavier Ouellet is one of the three you want on the ice.

Weaknesses: He's a slightly above average skater and although he can skate backwards better than most players I've seen, he has a "hiccup" when switching directions and sometimes that second or two can be enough for the oncoming forward to get around him. He's not going to score a lot of goals and his offensive potential is the lowest of the defensemen in this post.

Expectations: If the Wing are truly looking to upgrade their defense in training camp (and they sure should be) Ouellet would be the safest choice, and will probably be a top candidate to make the team. He'd be better than Brian Lashoff or Jakub Kindl right away and would only improve as the season progresses. He's the strong, solid, dependable, safe choice.

Sproul may be last among these four alphabetically, but he has the most offensive ability and certainly the most potential in the NHL. Sproul played 72 games in his rookie season in Grand Rapids and scored 11 goals, had 21 assists, and had 4 power play goals in the regular season and played 10 games in the playoffs and scored 2 goals and had 3 assists and 1 power play goal.. He was 2nd among defensemen scoring but 1st in defenseman goals in the regular season and was 8th on the entire team in scoring.

Strengths: Sproul has incredible offensive abilities that aren't common in a defenseman. He's a power play quarterback who has an absolutely howitzer of a shot and he can lead a breakout beautifully. He's an excellent skater with both good speed and good mobility. He loves to carry the puck into the zone and shoots the puck anytime he gets the chance (not into shin pads and goalies' chests). He has good on ice vision and could be an elite defenseman when he matures.

Weaknesses: The easiest way for me to describe Sproul's defensive weaknesses is to take a trip back on memory lane to Brendan Smith's first 50 or so NHL games. Sproul improved significantly defensively in GR last season, but he still makes decisions to pinch, jump up offensively, or take risks that, when they pay off in the forms of goals and scoring chances, can be glorious, but when they go wrong they can go oh so wrong. He's worked hard the last year to improve and he's come a long way, but he's still a higher risk, higher reward player.

Expectations: The Wings could benefit from bringing Sproul up this season if he has a good camp, but he would be the riskiest of the four. Regardless of where I think Sproul should play this season, the Wings don't like to take any risks they don't absolutely have to, so I expect they'd go with a safer choice on defense. Sproul will continue his growth in Grand Rapids, refining his defense and continuing to be a great asset on the PP. Sproul's potential is very high and he could become a top pairing d-man who can QB the the power point while being a "complete package " player.

Up next, we'll preview the top six wingers