Training Camp is only sixteen days away, and allowing for a few possible tweaks to the roster, we basically know who's going to be on the team when the Wings begin the regular season on October 9th. While we have a pretty good idea of who's going to be on defense to start the season, there are still a few interesting options when it comes to who's paired with whom. There are many ways to determine defense pairings, but quite possible one of my favorite ways to rosterbate about said pairings this summer, has been to create pairings based on their WOWY stats. If you're not familiar with WOWY yet, it stands for "With or without you" and measures a player's Corsi percentage with and without any other player. So, what defense pairings would we get on the Wings based on their WOWY stats from last season?

All stats are courtesy of stats.hockeyanalysis.com, only look at even strength, and are adjusted for zone starts. Zone start adjustments ignore the first ten seconds after an offensive or defensive zone faceoff, thereby eliminating most zone start effects. In order to have enough data for draw any reliable conclusions, only the top seven regular defensemen from last season are included,

Niklas Kronwall is unquestionably the Wings top defenseman, and that's not going to be contested any time soon. Nik played 1118 minutes last year and he spent 526 of them with Jonathan Ericsson. Had Riggy not been injured for almost half the season, that pairing probably wouldn't have been broken up. Is that the best top pairing we could have this year though? Let's see what his WOWY stats have to say. 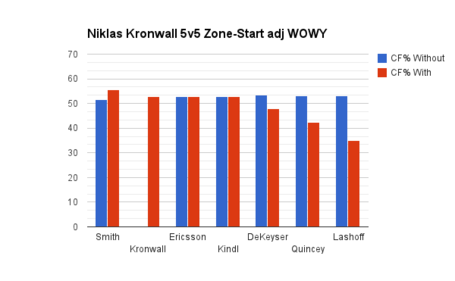 Brendan Smith was the only partner Kronwall had last season who helped improve Kronwall's Corsi, and Smith played the second most minutes with Kronwall (343) so we're not looking at a skewing sample size. I was already impressed with how much better Smith played when paired with Kronwall last year, and the fact that he makes Kronwall better pretty much solidified my desire to see these two paired together to start the season. What about Smith though, did Kronwall really help him play better, or did our eyes deceive us? 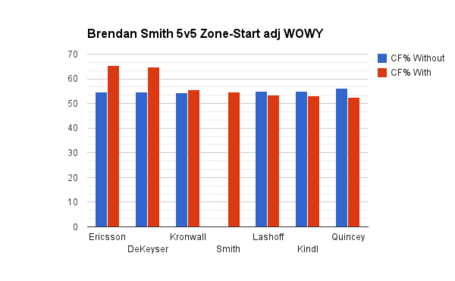 Well, that's all I needed to know. While Smith had a better Corsi with both Ericsson and DeKeyser, he also only played 19 and 22 minutes respectively with them, so we are looking at a very small sample size. As mentioned above, Smith and Kronwall played 343 minutes together and they each have a better Corsi % together than apart. How can you argue with those numbers? There's one additional important thing you may notice about Smith's WOWY's. He played more minutes with Kyle Quincey than any other player, and he also had a worse Corsi with Quincey THAN ANY OTHER DEFENSEMAN!!!!! Smith's Corsi dropped 3.5 percentage points when with Quincey as compared to his stand alone stats. For the love of sanity, please Mike Babcock, don't put those two together any more.

I'd even like to see these two kept together as the D pairing for the top power play unit. They work well together, and while Kronwall is a given to be on the #1 PP point, one of the things that made Smith so highly touted before coming up to the Wings was his production, and the power play was a big part of that production. I think Kronwall and Smith already have some good chemistry together, why not use that to our advantage, especially on a team who's "reloading" and can use all the help it can get?

If I'm picking the next two best defensemen on the team, I'm looking at Danny DeKeyser and Jonathan Ericsson. There were only two partners that DeKe played better with than he did without. Smith had a pretty big positive impact, but it's important to take into consideration that they only played 22 minutes together (out of DeKeyser's total 918 minutes played), and also that Smith is already slotted to play with Kronwall on the top pairing. Ericsson and DeKeyser only played 36 minutes together, but given the fact that Ericsson had a positive impact on DeKeyser, and the fact that Riggy should be in the top four, I'm going to go with it. 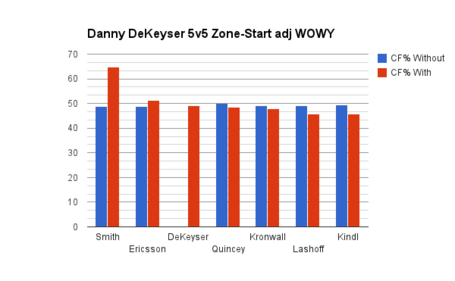 Bumping Riggy off the top line with Kronwall isn't a reflection of his performance and abilities, and he's certainly one of the Wings top four defensemen. Ericsson only played 48 games last season, thanks mostly to broken rib and a broken finger, so his sample size is significantly smaller than the rest. He played a total of 796 minutes and 624 of them were with Kronwall, so I'm a little hesitant to make too many definitive conclusions about his other partners. 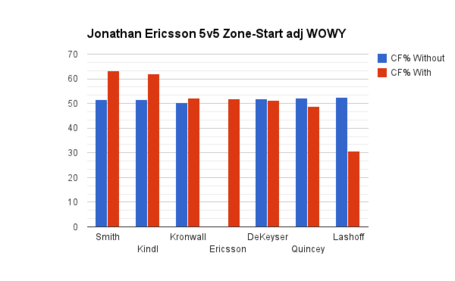 I'm sensing a trend here. Smith, while playing only 20 minutes with Ericsson, is once again the partner with the best WOWY impact. Ericsson's Corsi with DeKeyser is slightly lower than without, but only by .04% in the 42 minutes they played together. I'm perfectly happy to put these two together because: 1) That's a very small decrease in Corsi given their few minutes paired together 2) Kronwall and Smith are already paired together on the top pairing and there's no way in the universe that I'm putting Jakub Kindl on the second pairing over Danny DeKeyser. Eat my shorts Kuba.

I like this pairing because Ericsson is a solid defensive defenseman who can take some of the pressure off DeKeyser. Sometimes it's easy to forget that DeKeyser only has only played 83 NHL games, and between injuries and incompetence *cough * KindlLashoffQuincey *cough * DeKeyser was called upon to play on the top pairing with Kronwall for a while, and that's a tall order for any rookie defenseman. I think Ericsson could be his Brad Stuart and allow DeKe to relax a little bit and maybe let his offensive side come out a little more; similar to how Stuart and Kronwall worked so well together and brought out each other's strengths.

This is where I feel less confident and more hopeful that we'll have some Griffins defensemen to play with. The Wings just re-signed Kyle Quincey, so he's going to be on the roster; the best I can hope for is that he's on the third pairing and not the second. Of the three remaining defensemen currently on the roster, Quincey and Kindl are the default final pairing, with Lashoff being the 7th man. 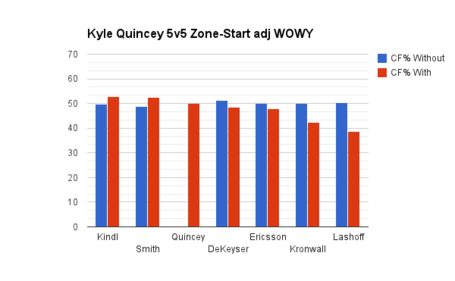 At first I was a little surprised to see that Quincy's Corsi with Jakub Kindl was better than his Corsi with any other partners, but when I considered that meant he was probably playing more sheltered, I guess it's less surprising. It's interesting that Quincey had a higher WOWY rating with Smith than alone, especially since Smith's worse WOWY numbers were with Quincey. Essentially, Smith had a 3.8% positive impact on Quincey, while Quincey had a -3.5% impact on Smith. Woof. 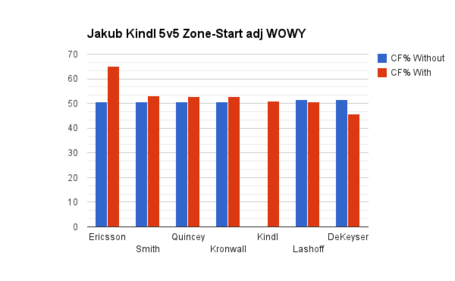 While it's my hope that Kindl is the 7th defenseman, and one of Xavier Ouellet, Alexey Marchenko, Mattias Backman or Ryan Sproul are in his place, I have no confidence that's what's going to happen while the team is healthy.

Brian Lashoff should be in Grand Rapids, but since he was on the roster for all of last season, here's his WOWY chart. He doesn't get a partner, but if he did I'd put him with Kindl. 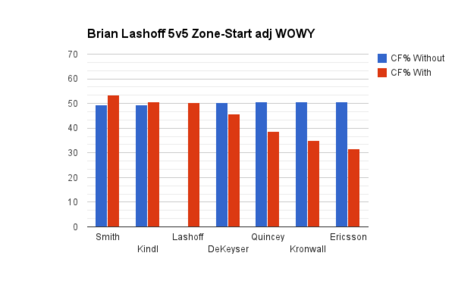 Wrap it up already:

I'd have a lot of confidence in a top four of Kronwall- Smith and DeKeyser-Ericsson, and if those pairings just weren't working out, just move Ericsson back up with Kronwall and put Smith with DeKeyser. Smith went through a lot of growing pains last year, and he received more than his fair share of criticism and blame, and yet every other defenseman was better when playing with Smith, than without him. In fact, of all seven defensemen, DeKeyser, Ericsson, Kronwall, and Lashoff all have better WOWY stats with Smith than with any other defensemen. The ability to make other players better is an enormous asset that not a lot of players have, so for a rookie with only 138 NHL games under his belt, that's impressive.

would be pretty solid, and if the team can stay anywhere near healthy this year, I'm hopeful that the Wings will be substantially better than last year.